Why big hurricanes weaken before they hit America’s coast. IN 2015, a bit over two years after Hurricane Sandy hit his city, Bill de Blasio, New York’s mayor, announced the creation of a $3 billion restoration fund. 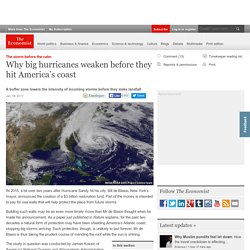 Part of the money is intended to pay for sea walls that will help protect the place from future storms. Building such walls may be an even more timely move than Mr de Blasio thought when he made his announcement. As a paper just published in Nature explains, for the past two decades a natural form of protection may have been shielding America’s Atlantic coast, stopping big storms arriving. Such protection, though, is unlikely to last forever. Mr de Blasio is thus taking the prudent course of mending the roof while the sun is shining. The study in question was conducted by James Kossin of America’s National Oceanic and Atmospheric Administration, using wind and ocean-temperature data collected since 1947. Natural disasters caused $175 billion in damage in 2016 - Jan. 4, 2017. These disasters helped push the total damage caused by natural catastrophes to $175 billion in 2016, according to the German reinsurance firm Munich RE. 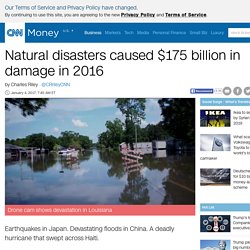 The global cost was the highest in four years. Only 30% of the losses -- $50 billion -- were insured, according to Munich RE. Cyclone Vardah hits Indian city of Chennai. The storm uprooted trees, overturned cars and did extensive damage to buildings as it tore across the city. 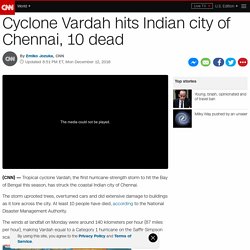 At least 10 people have died, according to the National Disaster Management Authority. The winds at landfall on Monday were around 140 kilometers per hour (87 miles per hour), making Vardah equal to a Category 1 hurricane on the Saffir-Simpson scale. It has now moved inland, bringing gusty winds and torrential rainfall to the interior portions of Tamil Nadu, Andhra Pradesh and Karnataka states.

Prior to the storm's landing, Chennai already was pounded with heavy rain and winds. The Indian Meteorological Department has issued heavy rain warnings for the whole of southern India. City on lockdown Chennai, a city on the Bay of Bengal in eastern India, is the country's second largest financial hub after Mumbai. Tropical Cyclone Vardah slams into Chennai.

NASA launches tiny satellites to measure hurricane winds. The scenario will take place in real life Thursday at 8:30 a.m, when an aircraft similar to a commercial airliner carries a Pegasus rocket to about 40,000 feet and releases it. 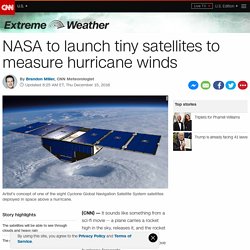 Boosters will propel the rocket into space, where it will deploy eight small satellites into orbit to provide better hurricane predictions back here on Earth. Breaking the Link Between Extreme Weather and Extreme Poverty. Compared to their wealthier counterparts, poor people are more likely to live in fragile housing in disaster-prone areas, and work in sectors dangerously susceptible to extreme weather events, like farming and agriculture. 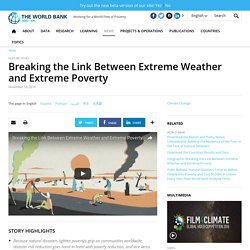 They also receive much less government and community support for recovery. The result: the impact of a storm, flood, drought or earthquake is more than twice as significant for poor people than anyone else. Tornadoes hit Wales and Midlands. A number of tornadoes have struck parts of Wales and the Midlands, causing damage to buildings and cars. 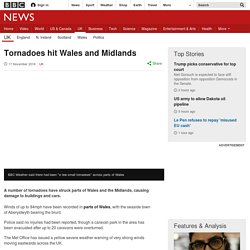 Winds of up to 94mph have been recorded in parts of Wales, with the seaside town of Aberystwyth bearing the brunt. Police said no injuries had been reported, though a caravan park in the area has been evacuated after up to 20 caravans were overturned. The Met Office has issued a yellow severe weather warning of very strong winds moving eastwards across the UK. Brought in by a squally cold front, BBC Weather said the high winds were expected to clear to the east through the course of Thursday afternoon. Hurricane Nicole’s Cold Water Wake. When Hurricane Nicole blew across the Atlantic and over Bermuda in October 2016, the storm stirred up the ocean and left a distinctive pattern in its wake. 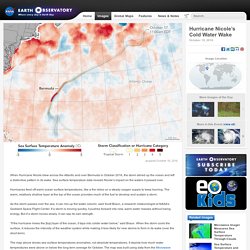 Sea surface temperature data reveals Nicole’s impact on the waters it passed over. Hurricanes feed off warm ocean surface temperatures, like a fire relies on a steady oxygen supply to keep burning. The warm, relatively shallow layer at the top of the ocean provides much of the fuel to develop and sustain a storm. Super Typhoon Haima batters northern Philippines. Midwife in Haiti tells of delivering babies knee-deep in water by torchlight. A midwife in Jérémie, Grand’Anse, one of the worst-hit towns in Haiti during Hurricane Matthew, has told how she delivered six babies, two boys and four girls, in a blackout during the night of the storm. 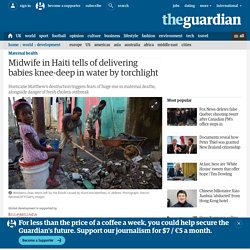 Marie-Lyrette Casimir, a midwife at St Antoine hospital, worked by flashlight as the fiercest Caribbean storm in almost a decade ripped though the south-west tip of the country, killing more than 500 people and causing widespread devastation. Hurricane Nicole pummels Bermuda and moves into Atlantic. Image copyright AP Hurricane Nicole has roared across Bermuda, tearing roofs from buildings and uprooting trees, before moving out into the Atlantic Ocean. 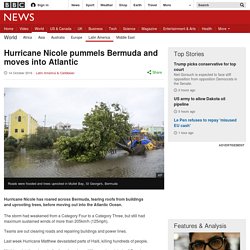 The storm had weakened from a Category Four to a Category Three, but still had maximum sustained winds of more than 205km/h (125mph). Teams are out clearing roads and repairing buildings and power lines. Last week Hurricane Matthew devastated parts of Haiti, killing hundreds of people. Typhoon Sarika batters China's Hainan - News from Al Jazeera. Typhoon Sarika has slammed into China’s southern island province of Hainan. 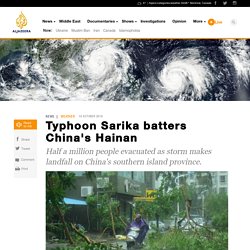 Haiti beyond Matthew: building resilience to climate change. A woman walks next to trees downed by Hurricane Matthew in Coteaux, Haiti, on 9 October. © REUTERS/Andres Martinez Casares. Two countries, one island, life-and-death differences. Meanwhile, its neighbor -- the Dominican Republic -- has weathered similar disasters with vastly different results. How come the two countries fare so differently despite sharing the same island, Hispaniola? Here are some key disparities between Haiti and Dominican Republic, which contribute to each country's ability to recover from natural and man-made disasters: Both countries are at risk for earthquakes and hurricanes.

The map below shows what portions of Hispaniola Island lie on earthquake fault lines. This cartoon sums up the world's response to the hurricane in Haiti. The UN secretary general, Ban Ki-Moon has urged the world to help Haiti following the nationwide damage caused by Hurricane Matthew, calling for a “massive response”.

He said: Hundreds have died; at least 1.4 million people need assistance at this time. Hurricane Matthew: Haiti mourns amid cholera fears. Image copyright AFP Survivors of Hurricane Matthew in Haiti are mourning the victims as fears of an increase in cholera cases grow. On Sunday Haitians attended church services to remember the dead, some worshipping outside because buildings were destroyed. Haiti death toll from Hurricane Matthew passes 1,000 - News from Al Jazeera. The number of people killed in Haiti by Hurricane Matthew has hit 1,000 as the country battles new deaths from a cholera outbreak and buries bodies in mass graves.

The powerful hurricane, the fiercest Caribbean storm in nearly a decade, slammed into Haiti on Tuesday, whipping it with 230 kilometre an hour winds and torrential rains. The country is struggling to cope with a rise in cholera cases with officials warning that contaminated water and a lack of hygiene are posing serious risks to thousands of people in the impoverished country. While the capital and biggest city, Port-au-Prince, was largely spared, the south suffered devastation. Aerial footage from the hardest-hit towns shows a ruined landscape of shanties with tin roofs blown away and downed trees everywhere. Mud from overflowing rivers covered the ground. Citing local officials, Reuters news agency reported that at least 1,000 Haitians had been killed. Haitians are urging people not to give money to American Red Cross. As the death count after Hurricane Matthew approaches 900 and reports of deadly cholera outbreaks begin to surface, Haitians have sent out desperate pleas for help.

Government officials estimate at least 350,000 people needed assistance after the devastating storm. Hurricane Matthew’s Destructive Storm Surges Hint at New Normal. Hurricane Matthew: Haiti risks 'real famine', says interim president. Image copyright AFP. Hurricane Matthew Leaves Behind Devastation in Haiti. Haiti: Hurricane Matthew leaves hundreds dead. Once again much of the country is a disaster zone, with powerful Matthew shredding homes and engulfing communities in knee-deep water that is taking time to recede. At least 300 people have died since Matthew made landfall in Haiti on Tuesday as a Category 4 hurricane, according to Paul Altidor, Haitian ambassador to the United States. Hurricanes will worsen as planet warms and sea levels rise, scientists warn. Hurricane Matthew kills 26 as it slams into Bahamas - News from Al Jazeera. How to prepare for a hurricane. As it happened: Hurricane Matthew.

Summary More than 800 people have been killed in Haiti and four in the Dominican RepublicMatthew is now a Category Two hurricane, as the eye of the storm stays just off Florida coastFour people have been killed in Florida and more than a million left without powerFlooding could be severe in coastal areas of Florida, Georgia and South CarolinaNorth Carolina could also be affected as the storm moves north in days ahead.

Hurricane and Cyclone Public Information Map. A Super Typhoon Is About to Wreak Havoc: What You Need to Know.