Economist. STYLE is supposedly for ever. 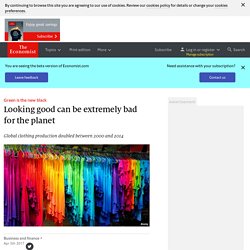 But the garments needed to conjure up eternal chic are spending less time on shop racks and in homes than ever before. Global clothing production doubled between 2000 and 2014, as apparel firms’ operations became more efficient, their production cycles became quicker and fashionistas got more for their money. From just a few collections a year, fast-fashion brands such as Zara, owned by Spain’s Inditex, now offer more than 20; Sweden’s H&M manages up to 16. Economist. EVEN by the standards of state visits, this one is especially lavish. 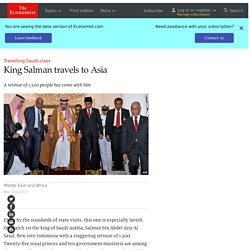 On March 1st the king of Saudi Arabia, Salman bin Abdel Aziz Al Saud, flew into Indonesia with a staggering retinue of 1,500. GOES-R heads to orbit, will improve weather forecasting. In about two weeks, once GOES-R is situated in orbit 22,300 miles above Earth, it will be known as GOES-16. 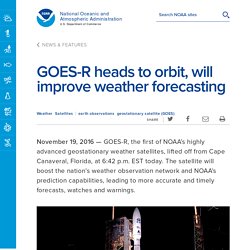 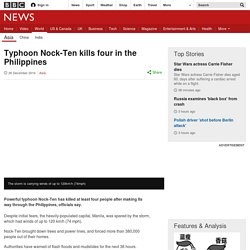 Despite initial fears, the heavily-populated capital, Manila, was spared by the storm, which had winds of up to 120 km/h (74 mph). Australia flood: Six missing following record rainfall. Image copyright Parks Australia Six people are missing after record rainfall caused floods in Australia's outback and forced the temporary closure of a famous national park. 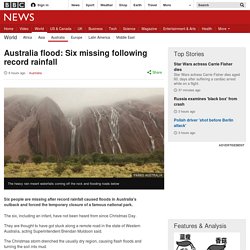 The six, including an infant, have not been heard from since Christmas Day. They are thought to have got stuck along a remote road in the state of Western Australia, acting Superintendent Brendan Muldoon said. Economist. MEASURING sea ice is difficult. 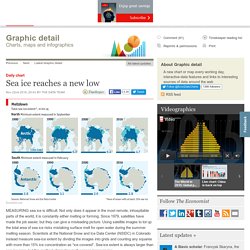 Not only does it appear in the most remote, inhospitable parts of the world, it is constantly either melting or forming. Since 1979, satellites have made the job easier, but they can give a misleading picture. Using satellite images to tot up the total area of sea ice risks mistaking surface melt for open water during the summer melting season. Scientists at the National Snow and Ice Data Center (NSIDC) in Colorado instead measure sea-ice extent by dividing the images into grids and counting any squares with more than 15% ice concentration as “ice covered”.

Sea-ice extent is always larger than sea-ice area, but this method eliminates melt-season inaccuracies. Scientists are interested in sea ice as a marker—and amplifier—of climate change. La Niña Has Officially Arrived — And It's Bad News For The Drought-Parched West - BuzzFeed News. What climate change deniers, like Donald Trump, believe - BBC Newsbeat. World's poorest countries to aim for 100% green energy. Image copyright Kairos Dela Cruz Representatives from 47 of the world's most disadvantaged nations have pledged to generate all their future energy needs from renewables. 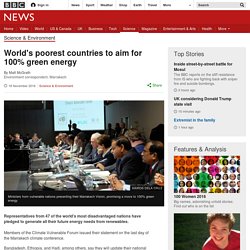 Members of the Climate Vulnerable Forum issued their statement on the last day of the Marrakech climate conference. Bangladesh, Ethiopia, and Haiti, among others, say they will update their national plans on cutting carbon before 2020. Delegates here welcomed the move, saying it was "inspirational". Dominican Republic floods displace more than 20,000. Homes and schools flooded as heavy rain hits Wales. California wildfires: What is a firenado? Image copyright Getty Images Amidst the devastation of a huge wildfire in the US state of California, photos have emerged of a rare force of nature. 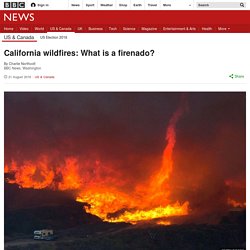 Firenadoes, torrents of wind and flame that burn at extreme temperatures, have been spotted in the hills near San Bernardino, 60 miles (96km) east of Los Angeles. The whirlwinds form when a fire heats air above it and pulls in cool air at its base, creating a self-sustaining vortex. Paris climate deal: US and China formally join pact. Image copyright Reuters The US and China - together responsible for 40% of the world's carbon emissions - have both formally joined the Paris global climate agreement. 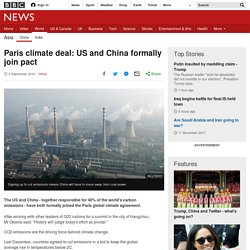 After arriving with other leaders of G20 nations for a summit in the city of Hangzhou, Mr Obama said: "History will judge today's effort as pivotal. " CO2 emissions are the driving force behind climate change. Last December, countries agreed to cut emissions in a bid to keep the global average rise in temperatures below 2C. What is climate change? What does the climate deal mean for me? US storm Hermine: Eastern states brace for heavy rain. Image copyright Reuters US east coast states are on alert for Tropical Storm Hermine, which is pushing north-eastward as people take time off for the long holiday weekend. 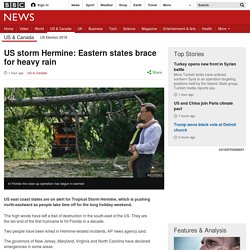 The high winds have left a trail of destruction in the south-east of the US. Pressure grows on UK to ratify Paris climate change deal. Image copyright AP Pressure is growing on the UK government to ratify the Paris climate change deal immediately. A spokesman for the prime minister told the BBC the UK would ratify "as soon as possible", but did not suggest a date. Mexico on alert as Hurricane Newton heads for Pacific coast. Image copyright AFP A huge storm bearing down on the Pacific coast of Mexico has strengthened to a hurricane just hours before it is due to make landfall.

Hurricane Newton is heading north-west towards the southern end of the Baja California peninsula with winds of about 75mph (120 km/h).