10 years of Weather events in UK. 2013 in review: a year of increasing extreme weather events. 2013 was the seventh warmest year on record and saw one of the strongest cyclones, some of the longest heatwaves and the most topsy-turvy weather experienced in decades. 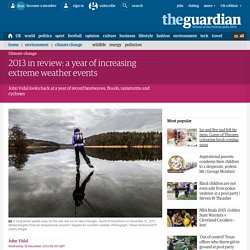 Nowhere is thought to have witnessed faster change than Nikkaluokta, a small Lapland village above the Arctic circle in northern Sweden. On 3 December, it was enjoying an unseasonally warm 4.7C. Within a few days, the temperature had dropped to a bone-chilling -40.8C (-41.4F) but on 10 December it rose again in just a few hours to a balmy 7.7C. The 48.5C rise in under 48 hours is one of the greatest ever recorded and is comparable to the world's fastest-temperature rise: 27C in just two minutes in Spearfish, South Dakota back in 1943. What happened in Lapland was, on the surface at least, not unusual, abrupt short-term weather change possibly caused by a convoluted jet stream.

The IPCC 5th assessment report, which is considered the consensus of world scientists, was unequivocal that climate change was happening fast. Extreme Weather. Photograph by Sean R. 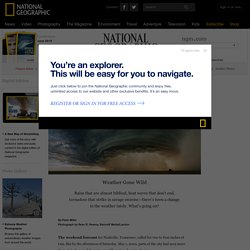 Heavey, Barcroft Media/Landov The weekend forecast for Nashville, Tennessee, called for two to four inches of rain. But by the afternoon of Saturday, May 1, 2010, parts of the city had seen more than six inches, and the rain was still coming down in sheets. Mayor Karl Dean was in the city’s Emergency Communications Center monitoring the first reports of flash flooding when something on a TV screen caught his eye. It was a live shot of cars and trucks on Interstate 24 being swamped by a tributary of the Cumberland River southeast of the city. “We’ve got a building running into cars,” the TV anchorman was saying.

Dean had been in the “war room” for hours. This was a new kind of storm for Nashville. Over at NewsChannel 5, the local CBS station, meteorologist Charlie Neese could see where the weather was coming from. The Cumberland River, which winds through the heart of Nashville, started rising Saturday morning. The experience changed him. What’s going on? Was 2013 4th or 7th Hottest Year? It Depends Who You Ask - weather.com. This much we know: 2013 was one of the planet's warmest years since modern temperature records began more than 130 years ago, and provides another strong sign of Earth's long-term warming trend. 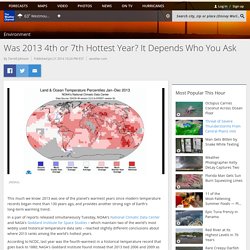 In a pair of reports released simultaneously Tuesday, NOAA's National Climatic Data Center and NASA's Goddard Institute for Space Studies – which maintain two of the world's most widely used historical temperature data sets – reached slightly different conclusions about where 2013 ranks among the world's hottest years. According to NCDC, last year was the fourth-warmest in a historical temperature record that goes back to 1880; NASA's Goddard Institute found instead that 2013 tied 2006 and 2009 as the seventh-warmest on record. Despite the gap between the two rankings – due to NASA's "processing [temperature data] slightly differently than NOAA" in areas like the Arctic and Antarctica, NASA climatologist Gavin Schmidt said in a conference call – there's actually little difference between them.

World begins 2014 with unusual number of extreme weather events. There have been heatwaves in Slovenia and Australia, snow in Vietnam and the return of the polar vortex to North America. 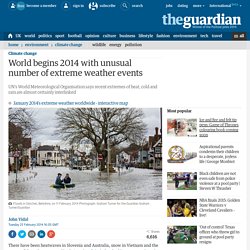 Britain has had its wettest winter in 250 years but temperatures in parts of Russia and the Arctic have been 10C above normal. Meanwhile, the southern hemisphere has had the warmest start to a year ever recorded, with millions of people sweltering in Brazilian and southern African cities. According to the UN's World Meteorological Organisation (WMO), which monitors global weather, the first six weeks of 2014 have seen an unusual number of extremes of heat, cold and rain – not just in a few regions as might be expected in any winter, but right the way around the world at the same time, with costly disruptions to transport, power systems and food production. "Melbourne, Adelaide and Canberra have all had record heatwaves, while temperatures in Moscow were 11C above normal.

"Both equatorial and polar regions have experienced extremes. Extreme Events. Satellite view of hurricane Hugo in 1989 Extreme events such as heat waves, droughts, tornadoes, and hurricanes have affected the United States since the dawn of time. 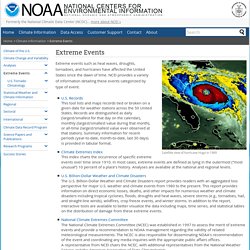