Resources for Learning and Teaching about Weather 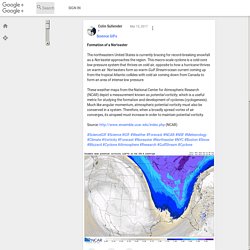 This macro-scale cyclone is a cold-core low-pressure system that thrives on cold air, opposite to how a hurricane thrives on warm air. Nor'easters form as warm Gulf Stream ocean current coming up from the tropical Atlantic collides with cold air coming down from Canada to form an area of intense low pressure. These weather maps from the National Center for Atmospheric Research (NCAR) depict a measurement known as potential vorticity, which is a useful metric for studying the formation and development of cyclones (cyclogenesis). Much like angular momentum, atmospheric potential vorticity must also be conserved in a system. 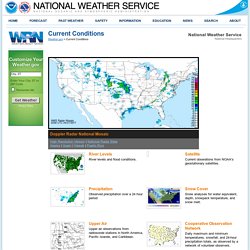 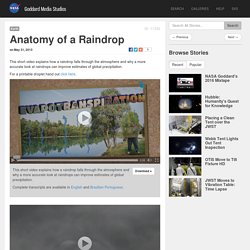 JetStream Topic Matrix. From Gas to Liquid to Solid. What causes frost to form on the outside of a cold container? 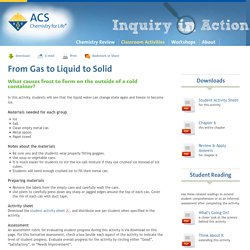 In this activity, students will see that the liquid water can change state again and freeze to become ice. Materials needed for each group Ice Salt Clean empty metal can Metal spoon Paper towel Notes about the materials Be sure you and the students wear properly fitting goggles. Preparing materials Remove the labels from the empty cans and carefully wash the cans. Activity sheet Download the student activity sheet, and distribute one per student when specified in the activity. Assessment An assessment rubric for evaluating student progress during this activity is via download on this page. Question to investigate: What causes frost to form on the outside of a cold container? Discuss how cooling can cause changes in state. Hexagonal Plate Crystals from the Wilson Bentley Collection - EPOD - a service of USRA. Provided by: The Schwerdtfeger Library Summary Author: Jim Foster Shown above is a micrograph of a pair of ornate snow crystals that likely fell within minutes of each other during the same snowstorm. 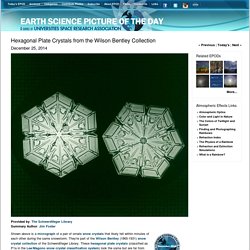 They're part of the Wilson Bentley (1865-1931) snow crystal collection of the Schwerdtfeger Library. These hexagonal plate crystals (classified as P1a in the Lee/Magono snow crystal classification system) look the same but are far from being identical. The familiar six-sided shape of snow crystals (six-fold symmetry) results directly from the six-fold symmetry of the ice crystal lattice. But because even two crystals falling to the ground almost side-by-side fall through ever-so-slightly different environments, they won't look identical, at least not when viewed through a microscope. Merry Christmas and Happy New Year from the Staff of the Earth Science Picture of the Day Jackie Phillips, Erin Carver, Stu Witmer, Jim Foster. Teacher Pages - Activity: Preserve a Snowflake Forever. Next time it snows, be ready to take your students outdoors and capture snowflakes and preserve their shape forever. 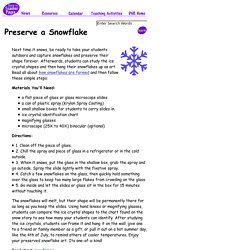 Afterwards, students can study the ice crystal shapes and then hang their snowflakes up as art. Read all about how snowflakes are formed and then follow these simple steps: Materials You'll Need: a flat piece of glass or glass microscope slides a can of plastic spray (Krylon Spray Coating) small shallow boxes for students to carry slides in. ice crystal identification chart magnifying glasses microscope (25X to 40X) binocular (optional) Ice snow. Clouds And Weather. Global Lightning Activity. Where does lightning flash most frequently? 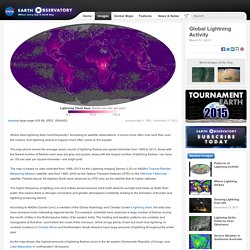 According to satellite observations, it occurs more often over land than over the oceans. And lightning seems to happen more often closer to the equator. The map above shows the average yearly counts of lightning flashes per square kilometer from 1995 to 2013. Areas with the fewest number of flashes each year are gray and purple; areas with the largest number of lightning flashes—as many as 150 per year per square kilometer—are bright pink. The map is based on data collected from 1998–2013 by the Lightning Imaging Sensor (LIS) on NASA’s Tropical Rainfall Measuring Mission satellite, and from 1995–2000 by the Optical Transient Detector (OTD) on the OrbView-1/Microlab satellite.