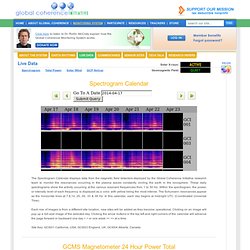 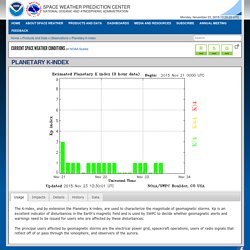 The Estimated 3-hour Planetary Kp-index is derived at the NOAA Space Weather Prediction Center using data from the following ground-based magnetometers: Sitka, Alaska; Meanook, Canada; Ottawa, Canada; Fredericksburg, Virginia; Hartland, UK; Wingst, Germany; Niemegk, Germany; and Canberra, Australia. These data are made available thanks to the cooperative efforts between SWPC and data providers around the world, which currently includes the U.S. 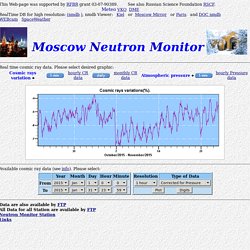 Sea Surface Temperature Anomaly - Current. IRIS Earthquake Browser. Seismic Monitor - Recent earthquakes on a world map and much more. Earthquakes today. Weather reports and forecasts - Satellite images - Climate normals. The Earth-Ionosphere cavity resonance. It's probably not a surprise to many that I'm interested not only in astronomy, but also electronics and radio communications. 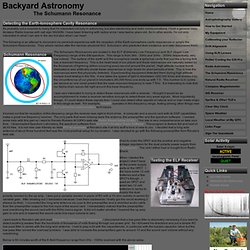 I hold a general class Amateur Radio license with call sign W4GON. I have been tinkering with radios since I was twelve years old. So in other words, I'm not only interested in what I can see in the sky but also what I can hear! The following is an attempt to document my personal experience with the reception of the Earth-ionosphere cavity resonances or simply the Schumann Resonances. They where named after the German physicist W.O. Research. Topics and Questions of Recent Research Interest Research topics pursued in recent years by Earle Williams and his collaborators are summarized here. 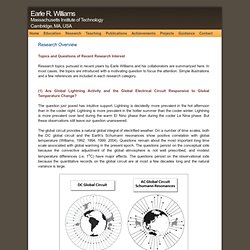 In most cases, the topics are introduced with a motivating question to focus the attention. Conceptual Image Lab Animation 10891 - Schumann resonance animation. At any given moment about 2,000 thunderstorms roll over Earth, producing some 50 flashes of lightning every second. 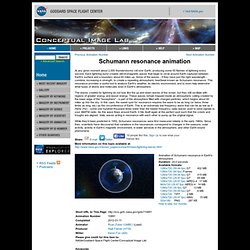 Each lightning burst creates electromagnetic waves that begin to circle around Earth captured between Earth's surface and a boundary about 60 miles up. Some of the waves - if they have just the right wavelength - combine, increasing in strength, to create a repeating atmospheric heartbeat known as Schumann resonance. This resonance provides a useful tool to analyze Earth's weather, its electric environment, and to even help determine what types of atoms and molecules exist in Earth's atmosphere.

The waves created by lightning do not look like the up and down waves of the ocean, but they still oscillate with regions of greater energy and lesser energy. These waves remain trapped inside an atmospheric ceiling created by the lower edge of the "ionosphere" - a part of the atmosphere filled with charged particles, which begins about 60 miles up into the sky. Les tâches solaires et le comportement humain. NASA/Marshall Solar Physics. We have suggested using the average of the predictions given by the Feynman-based method and by Thompson's method. 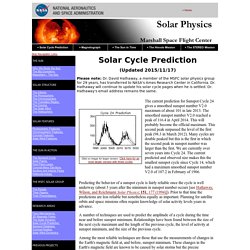 [See Hathaway, Wilson, and Reichmann J. Geophys. Res. 104, 22,375 (1999)] However, both of these methods were impacted by the "Halloween Events" of October/November 2003 which were not reflected in the sunspot numbers. Both methods give larger than average amplitude to Cycle 24 while its delayed start and low minimum strongly suggest a much smaller cycle. With John Hampson. Sunspots in action; with a foreword by Sir Edward V. Appleton. ... - Full View. Solar Activity: A Dominant Factor in Climate Dynamics. Precise forecasts that prove correct are a sharp criterion for efficient science. 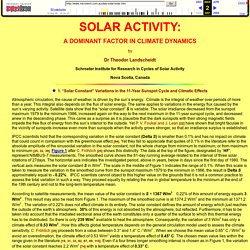 The protagonists of global warming remain empty-handed in this respect in spite of great material and personal expense. In the eighties S. Schneider from the National Center for Atmospheric Research in Boulder, Colorado, predicted in his book “Global Warming” a huge jump in temperature, polar ice melting away, seas surging across the land, famine on an epidemic scale, and ecosystem collapse. Today this is no longer taken seriously. Yet other climatologists, too, made forecasts in the eighties they no longer maintain. All these predictions have turned out to be untenable. Smelyakov. Chizhevsky1. Borderland Sciences Research Catalog. Science Frontiers: Some Anomalies and Curiosities of Nature. The primary intent of this book is entertainment. 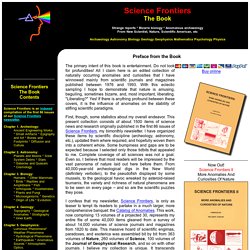 Do not look for profundities! All I claim here is an edited collection of naturally occurring anomalies and curiosities that I have winnowed mainly from scientific journals and magazines published between 1976 and 1993. With this eclectic sampling I hope to demonstrate that nature is amusing, beguiling, sometimes bizarre, and, most important, liberating. THE SEDONA EFFECT: - Home. Time-Price-Research.