Why is high pressure associated with fair, clear skies while low pressure systems are associated wit. Granizada brutal. Gallery: 12 glorious new reasons to celebrate cloudy days. For Gavin Pretor-Pinney, hell might be someplace like Yuma, Arizona, said to be the sunniest city on Earth and boasting more than 4,000 blinding hours of sunshine a year. 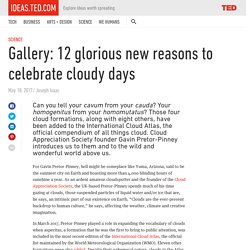 As an ardent amateur cloudspotter and the founder of the Cloud Appreciation Society, the UK-based Pretor-Pinney spends much of his time gazing at clouds, those suspended particles of liquid water and/or ice that are, he says, an intrinsic part of our existence on Earth. “Clouds are the ever-present backdrop to human culture,” he says, affecting the weather, climate and creative imagination. In March 2017, Pretor-Pinney played a role in expanding the vocabulary of clouds when asperitas, a formation that he was the first to bring to public attention, was included in the most recent edition of the International Cloud Atlas, the official list maintained by the World Meteorological Organization (WMO). Eleven other formations were also added. 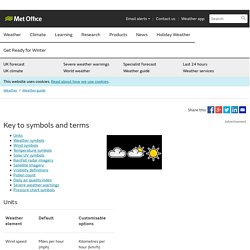 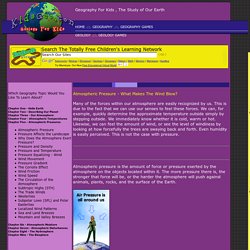 Many of the forces within our atmosphere are easily recognized by us. This is due to the fact that we can use our senses to feel these forces. We can, for example, quickly determine the approximate temperature outside simply by stepping outside. We immediately know whether it is cold, warm or hot. Likewise, we can feel the amount of wind, or see the level of windiness by looking at how forcefully the trees are swaying back and forth. Stuff to Blow Your Kid's Mind: Atmospheric Pressure.

Stuff to Blow Your Kid's Mind Did you know that air has weight? 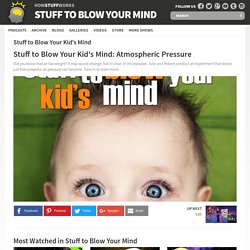 It may sound strange, but it's true. In this episode, Julie and Robert conduct an experiment that shows just how powerful air pressure can become. Tune in to learn more. Most Watched in Stuff to Blow Your Mind Monster Science: Monstrous Sex Ed: Alien Husbands If science fiction has taught us anything, it's that all-male alien species often develop an insatiable lust for Earth women. Stuff to Blow Your Mind: Epic Science: Face What does your face say about you? Stuff to Blow Your Kid's Mind: Gravity Gravity is the force that holds us on the planet -- but how does it actually work? Stuff to Blow Your Kid's Mind: Magnets You've probably played with magnets before -- these fascinating items can exert control over another object without actually touching it.

Stuff to Blow Your Mind: Epic Science: 3D Printing Robert and Julie show you what the future of manufacturing looks like with the 3D printer. Humidity. Humidity The amount of water vapor in the air is referred to as humidity. 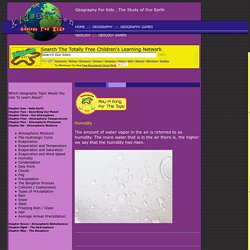 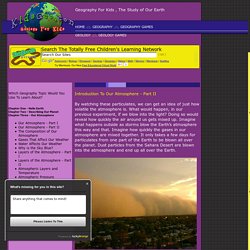 What would happen, in our previous experiment, if we blow into the light? Doing so would reveal how quickly the air around us gets mixed up. Imagine what happens outside as storms blow the Earth’s atmosphere this way and that. Imagine how quickly the gases in our atmosphere are mixed together. The Earth’s atmosphere extends outward to a distance of approximately 6,000 miles. The varying pressures of our atmosphere at different elevations has important effects on the weather, on animals and people, and on man-made devices. Layers of The Atmosphere. The Layers of Our Atmosphere In order to better understand our atmosphere, scientists have divided it into several layers. 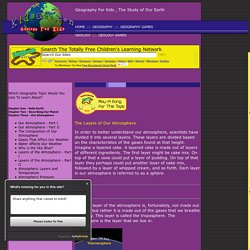 These layers are divided based on the characteristics of the gases found at that height. Imagine a layered cake. A layered cake is made out of layers of different ingredients. The first layer might be cake mix. Science for Kids: Earth's Atmosphere. Science >> Earth Science for Kids The earth is surrounded by a layer of gases called the atmosphere. 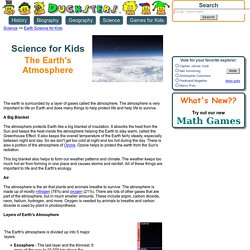 The atmosphere is very important to life on Earth and does many things to help protect life and help life to survive. A Big Blanket. What is the greenhouse effect? Air Pressure explained. Bill Nye The Science Guy on Wind (Full Clip)