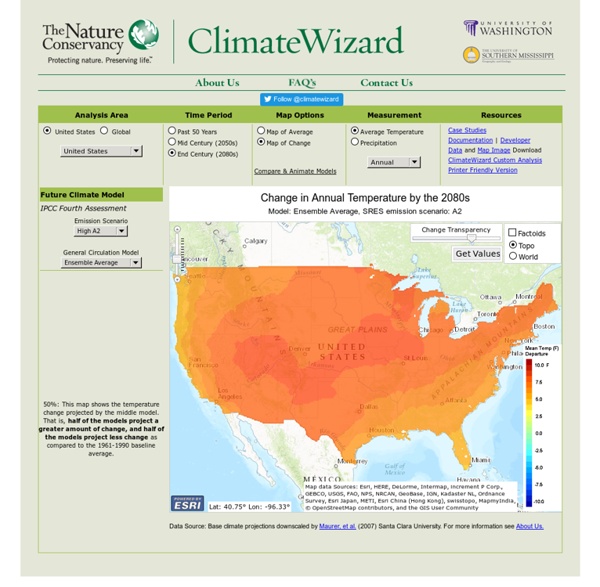 Global Warming Effects Map - Effects of Global Warming A Terrifying, Fascinating Timelapse of 30 Years of Human Impact on Earth - Emily Badger A new interactive project from Google, NASA and the US Geological Survey. Since the 1970s, NASA and the U.S. Geological Survey have been amassing satellite images of every inch of our planet as part of the Landsat program. Over time, the images reveal a record of change: of cities expanding, lakes and forests disappearing, new islands emerging from the sea off the coast of rising Middle East metropolises like Dubai. If you could thumb through these historic pictures as if in a flip book, they would show stunning change across the earth's surface, in both our natural environments and our man-made ones. Landsat images taken between 1984 and 2012 have been converted into a seamless, navigable animation built from millions of satellite photos. Below are a few of the GIFs Google has created showing some of the most startling pockets of change: The above image shows Dubai in 2011.

The Marine Climate Change - Impacts and Adaptaton Report Card for 2012 WelcomeThis 2012 Report Card demonstrates that climate change is having significant impacts on Australia’s oceans and marine ecosystems. Many new changes have been documented since the 2009 Report Card. There is now striking evidence of extensive southward movements of tropical fish and plankton species in southeast Australia, declines in abundance of temperate species, and the first signs of the effect of ocean acidification on marine species with shells. The report card highlights that the Australian science community is widely engaged in research, monitoring and observing programs to increase our understanding of climate change impacts and inform management. 98 of Australia’s leading marine scientists from 37 universities and research organisations contributed to the 2012 Report Card. New for 2012: Marine Mammals, Marine Microbes, Extreme Events, Enabling Policy, Marine Observation Programmes More details inside…

Climate Change and Game-Based Learning Teaching about complex interconnected systems like global climate change can be difficult. There are many unseen pieces affecting the greater whole that young people (and many adults) might not understand. One approach to lifting this conceptual curtain for students is assigning the BrainPOP video on the topic prior to class, flipping the instruction. Try BrainPOP's Make-a-Map tool, which is an open-ended concept map, a playful assessment, to have students demonstrate interconnections. Making Climate Change Games At a recent conference, I learned about EcoChains: Arctic Crisis. When students make their own climate-themed games, they will gain a deeper understanding of the topic. This spring I took part in Climate Game Jam: Water, organized by NOAA. Changing precipitation patterns Freshwater supply and sources Ocean acidification Polar issues Human use of water Marine/freshwater ecosystems There were also different game categories: Game Jamming to Learn About Complex Systems

Ocean pollution: Addressing root causes of nutrient over-enrichment Low oxygen (hypoxic) areas known as dead zones, where most marine life cannot survive, can result in the collapse of some ecosystems. There are now close to 500 dead zones with a total global surface area of over 245,000 km², roughly equivalent to that of the United Kingdom. The overall effect is to undermine the resilience of marine and coastal ecosystems, affecting in turn their ability to support coastal livelihoods such as fishing and tourism and their potential role in climate change adaptation and mitigation. The cost to countries of nutrient over-enrichment from the degradation of their marine and coastal natural resource base, and the services and livelihoods it provides, will increase without improved policy responses. Related links: <- Back to:

3B: CO2 - My Life's Story Part B: CO2—My Life's Story Atmospheric CO2 and temperature data taken from Vostok Ice Cores. Image source: Bowman Global Change and The Birch Aquarium, Scripps Institute of Oceangography, UCSD The carbon cycle has changed over Earth's history Imagine if fossils didn't exist. Take several minutes to examine the graph pictured above and then answer the Checking In questions below. Discuss The ice core CO2 and temperature data you just explored raises some interesting, more complex questions. To help you answer these important questions, focus on the following topics as you watch the video: Ice cores come from every place in the world where ice accumulates over time. Stop and Think 1: Describe the relationship between carbon dioxide, temperature and ice ages. A slow acting geologic carbon cycle is key to reducing the concentration of atm CO2 over very long time scales (hundred thousands of years to millions of years). The Long Term Geological Carbon Cycle Provenance: Dr. Checking In