A global map of wind, weather, and ocean conditions 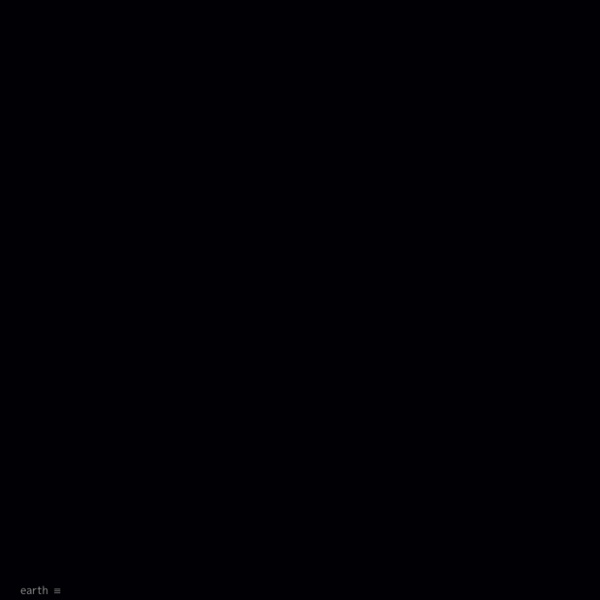 Pollution Locator: USA Over 4 billion pounds of toxic chemicals are released by industry into the nation's environment each year, including 72 million pounds of recognized carcinogens. Scorecard can give you a detailed report on chemicals being released from any of 20,000 industrial facilities, or a summary report for any area in the country. Scorecard spotlights the top polluters in the U.S., and ranks states and counties by pollutant releases. Provide your zipcode to get a report for your community, or use the Pollution Locator to search for reports on specific areas.

Everything Sings - Siglio Press Intro by Ira Glass, essays by Albert Mobilio and Ander Monson, interview by Blake Butler. That a cartographer could set out on a mission that’s so emotional, so personal, so idiosyncratic, was news to me. —IRA GLASS, host of This American Life, from his introduction to Everything Sings. Frontier of Physics: Interactive Map “Ever since the dawn of civilization,” Stephen Hawking wrote in his international bestseller A Brief History of Time, “people have not been content to see events as unconnected and inexplicable. They have craved an understanding of the underlying order in the world.” In the quest for a unified, coherent description of all of nature — a “theory of everything” — physicists have unearthed the taproots linking ever more disparate phenomena. Harvey vs Katrina: Have New Orleans lessons been learned? Image copyright AFP Scenes of vulnerable people in Houston trapped in rapidly rising floodwaters are evoking memories of the 2005 Hurricane Katrina disaster in which nearly 2,000 people died. The US government response to Katrina is widely seen as an abject failure that saw poorer, mainly black residents abandoned to fend for themselves. More than a decade later, have the lessons of Katrina been learned? No evacuation yet

Portland Police Bureau Alarm A burglary alarm which was responded to by law enforcement. Arson Any willful or malicious burning or attempt to burn, with or without intent to defraud, a dwelling, house, public building, motor vehicle or aircraft, personal property of another. Death Loss of life caused by negligence, suicide, and accidental death. Family Offense Unlawful nonviolent acts by a family member (or legal guardian) that threaten the physical, mental, or economic well-being or morals of another family member and that are not classifiable as other offenses, such as Assault or Sex Offenses. Missing Person A missing person is a person 18 years old or older whose disappearance is possibly not voluntary, or a child whose whereabouts are unknown to the child's legal custodian. Other Other crimes or incidents not falling into another category.

These Maps Show You How to Live, Not Just Where Data for GOOD Knowledge is the first step on the way to progress. It used to be that paper maps were the free gifts that came with your new compass, graphically representing geography via points, lines, and fire-breathing dragons—all of which indicated orientation, distance, latitude, longitude, and the sheer vastness of uncharted territory. But today’s multidimensional digital maps are comprehensive, interactive, and they’ve got the compass built right in. Plus, they’re changing the way we interact with our environments and with each other. According to Di-Ann Eisnor, the founder of map-based driving app Waze, “People really do want to help each other, and if they feel like they are part of something that is helping make a difference, they become passionate about it.”

Humans Have a Lot More Than Five Senses Today I found out humans have a lot more than five senses. It turns out, there are at least nine senses and most researchers think there are more like twenty-one or so. Just for reference, the commonly held definition of a “sense” is “any system that consists of a group of sensory cell types that respond to a specific physical phenomenon and that corresponds to a particular group of regions within the brain where the signals are received and interpreted.” The Sea Level Around Florida Is Rising Six Times Faster Than Average It really is hard to overstate how screwed Florida is when it comes to climate change. Sea level rise has already ensured that floods are becoming common, not freak weather extremes; it’s guaranteeing that hurricanes and their associated storm surges are just getting that much more powerful. Despite all this evidence, however, Governors and Senators who are often climate change deniers still get voted back into power there. As a result, instead of investing in climate change prevention measures, streets in Miami are literally getting raised up off the ground to stop floodwater coming in.

Portland Fire Bureau: Incidents This map contains up to 100 of the most recent, closed, non-confidential, 911 calls for service received by Portland Oregon's 911 system in the past 24 hours. 100 incidents on this map. ^click markers on the map for details^KEY: »Last Hour »Last 3 Hours Earth - Your life on earth Explore BBC Earth's unique interactive, personalised just to you. Find out how, since the date of your birth, your life has progressed; including how many times your heart has beaten, and how far you have travelled through space. Investigate how the world around you has changed since you've been alive; from the amount the sea has risen, and the tectonic plates have moved, to the number of earthquakes and volcanoes that have erupted.

Lushprojects.com - www.lushprojects.com - Circuit Simulator This electronic circuit simulator is highly interactive giving the feeling of playing with real components. It's very helpful for experimentation and visualization. Best of all, thanks to the power of HTML5, no plug-ins are required! The original implementation, in Java, belongs to Paul Falstad who kindly gave his permission for me to build this port. Click here to open the simulator in a full window. How to use this Greenland Fires Ignite Climate Change Fears In a real clash of fire and ice, a massive wildfire in southern Greenland has captured the world’s attention. At the end of July, a couple of NASA satellites detected hot spots in Greenland that indicated fire, said Mark Ruminski, a team leader for a hazard mapping system of the National Oceanic and Atmospheric Administration. But fires are unexpected in Greenland, so he and his team thought it might be an error in the data.