An airforce paper "owning the weather in 2025 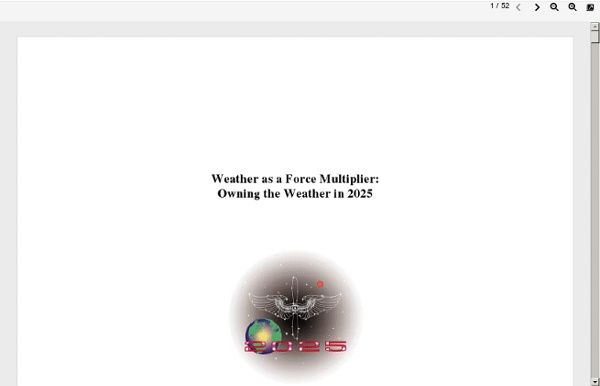 Navy Research Paper: 'Disrupt Economies' with Man-Made 'Floods,' 'Droughts' | Danger Room A recently-unearthed U.S. Navy research project calls for creating mad-made floods and droughts to "disrupt [the] economy" of an enemy state. "Weather modification was used successfully in Viet Nam to (among other things) hinder and impede the movement of personnel and material from North Viet Nam to South Viet Nam," notes a Naval Air Warfare Weapons Division – China Lake research proposal, released last month through the Freedom of Information Act. But "since that time military research on Weather Modification has dwindled in the United States." The proposal suggests a study of the latest weather manipulation techniques, to "give the U.S. military a viable, state-of-the-art weather modification capability again." With that in hand, American forces would be able… To impede or deny the movement of personnel and material because of rains-floods, snow-blizzards, etc. (2) To disrupt economy due to the effect of floods, droughts, etc. The proposal is undated.

Scientists Push for 'Solar Geoengineering' With Nano Particles to Whiten Our Skies Susanne Posel, ContributorActivist Post The latest scheme to combat global warming is to increase the amount of chemtrails (aerosols) in the atmosphere. The thinking behind this endeavor is that this will scatter incoming solar energy from the Earth’s surface. The side effect is that there will be an increased whitening of the sky during the daytime. Researchers, Ben Kravitz and Ken Caldeira, from the Carnegie Institute for Science , have found that by blocking a mere 2% of sunlight would cause the sky to become 3 – 5 times brighter, and whiter. Climate change alarmists assert that carbon dioxide emissions have caused the Earth’s surface temperature to rise. Scientists are looking for a faster way to change the temperature of the Earth. By using solar geoengineering scientists could “mimic” volcanic eruptions by constantly replenishing the stratosphere with nano particles to reflect sunlight back into space.

Youngstown Air Reserve Station - Aerial Spray Squadron Click the photo to watch a short video of a Hurricane Katrina Aerial Spray mission over the city of New Orleans, La. During the months of September and October 2005, the states of Louisiana, Mississippi, and Texas suffered from terrible circumstances resulting in the aftermath of Hurricane's Katrina and Rita. Hundreds of thousands of people were displaced from their homes while entire communities were wiped away by the storms or resulting flood conditions that left prime breeding grounds for mosquitoes and filth flies. The potential for these bugs to spread disease among the population would have been very high had it not been for the aerial spray mission personnel from the 757th Airlift Squadron who deployed to Duke Field, Fla. to set up a base of operations in order to conduct aerial spray missions over Louisiana and Texas. When it was all said and done, the 757th aircrews had sprayed 2,880,662 acres, or 4,501 square miles--an area equivalent in size to the state of Connecticut.

home | deciBel research Have scientists discovered how to create downpours in the desert? By Daily Mail Reporter Updated: 10:22 GMT, 3 January 2011 Technology created 50 rainstorms in Abu Dhabi's Al Ain region last year For centuries people living in the Middle East have dreamed of turning the sandy desert into land fit for growing crops with fresh water on tap. Now that holy grail is a step closer after scientists employed by the ruler of Abu Dhabi claim to have generated a series of downpours. Fifty rainstorms were created last year in the state's eastern Al Ain region using technology designed to control the weather. Dry as dust: The sand dunes of the United Arab Emirates, which sees no rain at all for months. Plan: Scientists are attempting to make clouds in the desert to give man control over the weather Most of the storms were at the height of the summer in July and August when there is no rain at all. People living in Abu Dhabi were baffled by the rainfall which sometimes turned into hail and included gales and lightening. 'Maybe this is a most important point for mankind.'

Flightradar24.com - Live flight tracker! Counterintelligence Through Malicious Code Analysis Amazon Price: N/A (as of April 21, 2014 04:35 – Details). Product prices and availability are accurate as of the date/time indicated and are subject to change. Any price and availability information displayed on the Amazon site at the time of purchase will apply to the purchase of this product. As computer network technology continues to grow so does the reliance on this technology for everyday business functionality. File Size: 160 KB Print Length: 106 pages Simultaneous Device Usage: Unlimited Sold by: Amazon Digital Services, Inc.