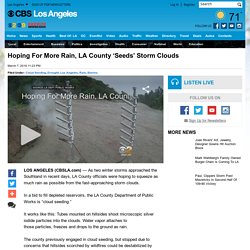 In a bid to fill depleted reservoirs, the LA County Department of Public Works is “cloud seeding.” It works like this: Tubes mounted on hillsides shoot microscopic silver iodide particles into the clouds. Water vapor attaches to those particles, freezes and drops to the ground as rain. The county previously engaged in cloud seeding, but stopped due to concerns that hillsides scorched by wildfires could be destabilized by additional rainfall. 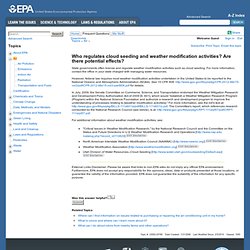 For more information, contact the office in your state charged with managing water resources. However, federal law requires most weather modification activities undertaken in the United States to be reported to the National Oceanic and Atmospheric Administration (NOAA). See 15 CFR 908: for details. In July, 2009, the Senate Committee on Commerce, Science, and Transportation endorsed the Weather Mitigation Research and Development Policy Authorization Act of 2009 [S. 601], which would "establish a Weather Mitigation Research Program (Program) within the National Science Foundation and authorize a research and development program to improve the understanding of processes relating to [weather modification activities].

" For more information, see the bill's text at: The Committee's report, which references research conducted by the National Research Council (see below), is at: Laser creates clouds over Germany - tech - 02 May 2010. Video: Laser creates clouds A laser has been used to generate small clouds on demand in lab, and real-world experiments suggest this could be a way to call down rain when it's needed. 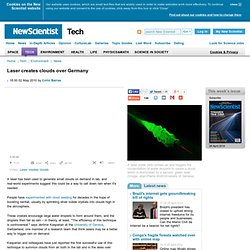 People have experimented with cloud seeding for decades in the hope of boosting rainfall, usually by sprinkling silver iodide crystals into clouds high in the atmosphere. These crystals encourage large water droplets to form around them, and the droplets then fall as rain – in theory, at least. "The efficiency of this technique is controversial," says Jérôme Kasparian at the University of Geneva, Switzerland, one member of a research team that think lasers may be a better way to trigger rain on demand.

Kasparian and colleagues have just reported the first successful use of this technique to summon clouds from air both in the lab and in the skies over Berlin, Germany. 6/5/2013 — Huntsville RADAR mystery SOLVED = BAE Systems, Raytheon, and DECIBEL RESEARCH Inc. Video explanation here: I highly recommend that you begin this short journey of intriguing new science here: many thanks to AlabamaTruth for putting this out for wider review At this above link, you will see how this story began. 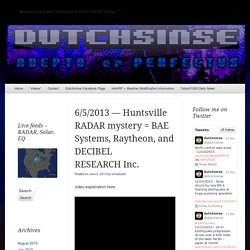 Huntsville, Alabama – June 4, 2013 – In the late afternoon, an odd circular shaped RADAR pulse was seen on NEXRAD RADAR (weather radar). Several people reported it, and local meteorologists are ‘baffled’ at what it could be. Watch the event on RADAR here: In the above RADAR screenshots, you can see the RADAR pulse epicenter is just north of the highway. Upon review of pulse epicenter on Google Earth — a VERY INTRIGUING series of buildings reside at the point of emission .. nearest coordinates of the pulse center are somewhere very close to : 34°42’58.54″N , 86°41’8.35″W Directly at the pulse epicenter is a company called DECIBEL RESEARCH . 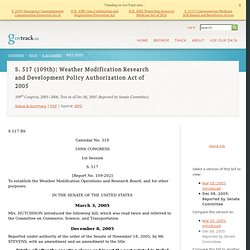 March 3, 2005 Mrs. December 8, 2005 Reported under authority of the order of the Senate of November 18, 2005, by Mr. [Strike all after the enacting clause and insert the part printed in italic] Be it enacted by the Senate and House of Representatives of the United States of America in Congress assembled, [Struck out->] SECTION 1. [Struck out->] This Act may be cited as the `Weather Modification Research and Technology Transfer Authorization Act of 2005'. [Struck out->] SEC. 2.