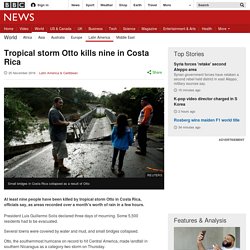 President Luis Guillermo Solis declared three days of mourning. Some 5,500 residents had to be evacuated. Several towns were covered by water and mud, and small bridges collapsed. Otto, the southernmost hurricane on record to hit Central America, made landfall in southern Nicaragua as a category-two storm on Thursday. But it weakened rapidly and became a tropical storm as it moved into the Pacific, the US National Hurricane Center (NHC) said. Costa Rica had not been directly hit by a hurricane since records began in 1851. Image copyright EPA The deaths were reported in the area of Bagaces and Upala, south of the border with Nicaragua. Businessman Carlos Alberto Volio, 68, told Reuters news agency: "Otto leaves us in a very difficult situation, both for the country and for all of us. Hurricane Otto: Category two storm makes Nicaragua landfall.

Image copyright AFP Hurricane Otto has made landfall over a sparsely populated area of southern Nicaragua after strengthening to a category two storm, meteorologists from the US National Hurricane Centre say. 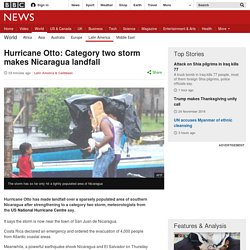 It says the storm is now near the town of San Juan de Nicaragua. Costa Rica declared an emergency and ordered the evacuation of 4,000 people from Atlantic coastal areas. Meanwhile, a powerful earthquake shook Nicaragua and El Salvador on Thursday triggering a brief tsunami alert. The 7.0 magnitude quake in the Pacific Ocean was about 120km (75 miles) off the coast of El Salvador. Nevertheless, Nicaraguan President Daniel Ortega declared a state of emergency due to the hurricane and the quake.

Potential for destruction Hurricane Otto has wind speeds of up to 110mph (175km/h) and is expected to weaken to a tropical storm by Thursday night. Forecasters have warned of heavy rains which they fear could cause life-threatening flash floods and mudslides. Image copyright Reuters. Hurricane Matthew: Dangerous storm closes in on Haiti. The most powerful Caribbean hurricane in nearly a decade has hit Haiti, bringing 230km/h (145mph) winds, heavy rain and dangerous storm surges. 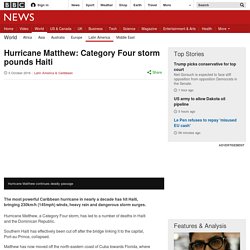 Hurricane Matthew, a Category Four storm, has led to a number of deaths in Haiti and the Dominican Republic. Southern Haiti has effectively been cut off after the bridge linking it to the capital, Port-au-Prince, collapsed. Matthew has now moved off the north-eastern coast of Cuba towards Florida, where warnings are in place. Early reports suggested that Cuba had not been hit as hard as Haiti. Tsunami simulator recreates devastating waves for first time in a lab. The full and devastating power of tsunamis has been recreated in lab for the first time, revealing valuable secrets about the little-understood waves. 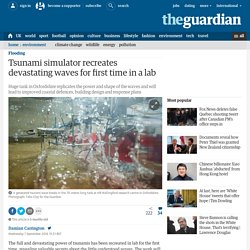 The work will lead to vital improvements to sea defences, coastal buildings and evacuation plans, ultimately saving lives. Five major tsunamis have struck coasts around the world since 2004, killing 300,000 people, and the risks are rising as coastal cities expand. Powerful quakes strike off Fiji, Tonga, but no tsunami risk: monitor. BBC Weather How do hurricanes form. How Storm Desmond left its mark on the Lake District. When Storm Desmond broke the UK’s 24-hour rainfall record with 341.4mm (13.4in) of rain in 24 hours in the Honister Pass in Cumbria on 5 December last year, it did extraordinary damage to the Lake District. 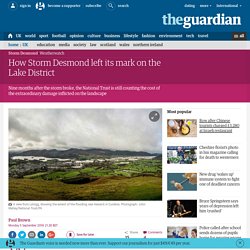 The headlines were about homes and businesses flooded, roads collapsed and bridges washed away. But across this beautiful landscape, one fifth owned by the National Trust, there were many problems. Rivers moved their courses, paths, fences and historic gardens were swept away, and wildlife havens destroyed. Florida coast battered by Hurricane Hermine. The first hurricane to hit Florida in a decade has killed one person, caused severe damage and knocked out power to nearly 300,000 homes and businesses. 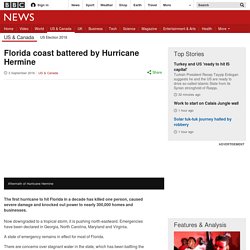 Now downgraded to a tropical storm, it is pushing north-eastward. Emergencies have been declared in Georgia, North Carolina, Maryland and Virginia. A state of emergency remains in effect for most of Florida. There are concerns over stagnant water in the state, which has been battling the mosquito-born Zika virus. Gusts of 80mph (130km/h) caused storm surges that flooded part of the Florida coast. In the town of Cedar Key, waters rose more than 9.5ft (2.9 metres), among the highest surges ever seen, according to the National Weather Service. A 56-year-old man died when a tree fell on the tent he was sleeping in, local media reported. Hurricane Hermine in pictures After making landfall early on Friday, Hermine swept through Florida and Georgia. It is expected the storm conditions will reach New York on Sunday. Zika fears Image copyright AP.