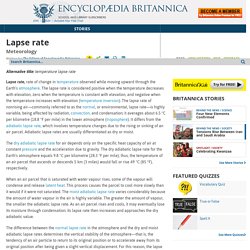 You can also highlight a section and use the tools in this bar to modify existing content: We welcome suggested improvements to any of our articles. You can make it easier for us to review and, hopefully, publish your contribution by keeping a few points in mind: Encyclopaedia Britannica articles are written in a neutral, objective tone for a general audience. You may find it helpful to search within the site to see how similar or related subjects are covered. Any text you add should be original, not copied from other sources.

Alternative title: temperature lapse rate Lapse rate, rate of change in temperature observed while moving upward through the Earth’s atmosphere. The dry adiabatic lapse rate for air depends only on the specific heat capacity of air at constant pressure and the acceleration due to gravity. Atmospheric stability. Other types of winds. The two winds that exist in mountain and valley locations are uphill, anabatic winds and downhill, katabatic winds. 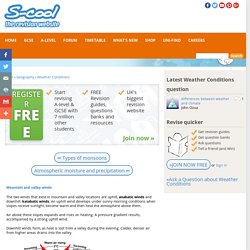 An uphill wind develops under sunny morning conditions when slopes receive sunlight, become warm and then heat the atmosphere above them. Air above these slopes expands and rises on heating. A pressure gradient results, accompanied by a strong uphill wind. Downhill winds form, as heat is lost from a valley during the evening. Colder, denser air from higher areas drains into the valley. These are created on a daily basis, as a result in the differences in heating and cooling of the land and sea. It then drifts out over the sea, increases in density and starts to sink.

The situation is reversed at night, leading to high pressure over the land and off shore breezes. Chinook Winds: The Snow Eaters. Chinook wind. Adiabatic warming of downward moving air produces the warm Chinook wind Chinook winds /ʃɪˈnʊk/, or simply chinooks, are foehn winds[1] in the interior West of North America, where the Canadian Prairies and Great Plains meet various mountain ranges, although the original usage is in reference to wet, warm coastal winds in the Pacific Northwest.[2] Chinook is claimed by popular folk-etymology to mean "ice-eater", but it is really the name of the people in the region where the usage was first derived. 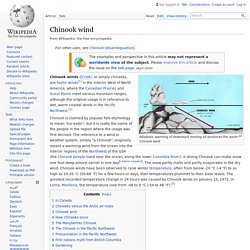 The reference to a wind or weather system, simply "a Chinook", originally meant a warming wind from the ocean into the interior regions of the Northwest of the USA (the Chinook people lived near the ocean, along the lower Columbia River). A strong Chinook can make snow one foot deep almost vanish in one day[citation needed]. The snow partly melts and partly evaporates in the dry wind. In Canada[edit] Where Chinooks occur most frequently Chinooks versus the Arctic air mass[edit] Chinook arch[edit] Foehn wind. A föhn or foehn is a type of dry, warm, down-slope wind that occurs in the lee (downwind side) of a mountain range. 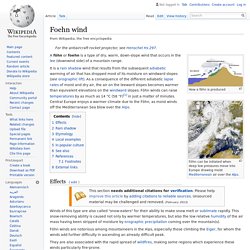 Föhn can be initiated when deep low pressures move into Europe drawing moist Mediterranean air over the Alps. It is a rain shadow wind that results from the subsequent adiabatic warming of air that has dropped most of its moisture on windward slopes (see orographic lift). As a consequence of the different adiabatic lapse rates of moist and dry air, the air on the leeward slopes becomes warmer than equivalent elevations on the windward slopes.

Föhn winds can raise temperatures by as much as 14 °C (58 °F)[1] in just a matter of minutes. Central Europe enjoys a warmer climate due to the Föhn, as moist winds off the Mediterranean Sea blow over the Alps. Effects[edit] Föhn winds are notorious among mountaineers in the Alps, especially those climbing the Eiger, for whom the winds add further difficulty in ascending an already difficult peak. Rain shadow[edit] Etymology[edit] El Nino may cause 'substantial weather event' - BBC News. Atmospheric stability. The Process of Adiabatic Cooling and Heating. Chapter 10 Adiabatic processes, lapse rates and rising air.