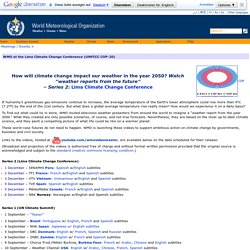 But what does a global average temperature rise really mean? How would we experience it on a daily basis? To find out what could lie in store, WMO invited television weather presenters from around the world to imagine a “weather report from the year 2050.” What they created are only possible scenarios, of course, and not true forecasts. Nevertheless, they are based on the most up-to-date climate science, and they paint a compelling picture of what life could be like on a warmer planet. These worst-case futures do not need to happen. Links to the videos, hosted at Series 2 (Lima Climate Change Conference) Series 1 (UN Climate Summit) Your Inner Feather. Feathers are like eyes or or hands. 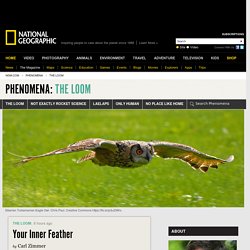 They’re so complex, so impressive in their adaptations, so good at getting a job done, that it can be hard at first to believe they evolved. Feathers today are only found on birds, which use them to do things like fly, control their body temperature, and show off for potential mates. Instagram. Instagram. Iquitoz : Enjoying a great afternoon... Scientists: Americans are becoming weather wimps. WASHINGTON (AP) — We've become weather wimps. 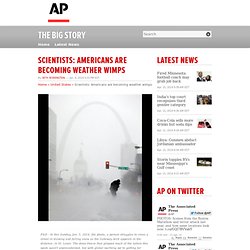 As the world warms, the United States is getting fewer bitter cold spells like the one that gripped much of the nation this week. So when a deep freeze strikes, scientists say, it seems more unprecedented than it really is. An Associated Press analysis of the daily national winter temperature shows that cold extremes have happened about once every four years since 1900. Until recently. When computer models estimated that the national average daily temperature for the Lower 48 states dropped to 17.9 degrees on Monday, it was the first deep freeze of that magnitude in 17 years, according to Greg Carbin, warning meteorologist for the National Oceanic and Atmospheric Administration. That stretch — from Jan. 13, 1997 to Monday — is by far the longest the U.S. has gone without the national average plunging below 18 degrees, according to a database of daytime winter temperatures starting in January 1900. 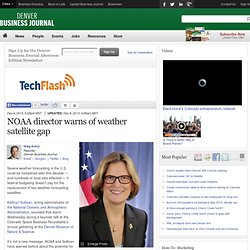 Kathryn Sullivan, acting administrator of the National Oceanic and Atmospheric Administration, sounded that alarm Wednesday during a keynote talk at the Colorado Space Business Roundtable’s annual gathering at the Denver Museum of Nature & Science. It’s not a new message. NOAA and Sullivan have warned before about the potential for a months-long gap in severe weather data collection if federal budgets don’t allow for the timely construction of satellites. Iquitoz : The phantom weather radar pattern... Beijing hit by heaviest rain in six decades. The heaviest rain to hit Beijing in six decades killed at least 10 people and left cars and buses submerged, and 10 other storm deaths were reported elsewhere as China braced Sunday for more downpours.

Skip to next paragraph Subscribe Today to the Monitor Click Here for your FREE 30 DAYS ofThe Christian Science MonitorWeekly Digital Edition The rain Saturday night knocked down trees in Beijing and trapped cars and buses in waist-deep water in some areas. In Tongzhou district on the capital's eastern outskirts, two people were killed by collapsed roofs, one person was fatally struck by lightning and a fourth was electrocuted by a fallen power line as he helped neighbors escape, the government's Xinhua News Agency said.

One man in Beijing died when his car was trapped in deep water near the city center, the newspaper Beijing News said. Elsewhere, six people were killed by rain-triggered landslides in Sichuan province in the west, Xinhua said, citing disaster officials. Does Rain Come From Life in the Clouds? Back at their lab Christner and Bryan examine two dozen petri dishes containing bacteria collected from flights that peaked between 10,000 and 80,000 feet. 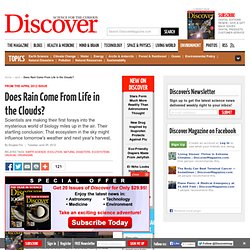 They have yet to sequence and ID the microbes’ DNA, but just looking at the petri dishes gives them some clues. Bright-colored colonies dot many of the dishes—reds, oranges, pinks, and yellows. “Those are natural sunscreens,” Christner says. Colored carotenoid pigments (similar to those in many plants, including the carrots that the compounds are named after) can neutralize damaging ultraviolet light. Christner holds up a petri dish containing colonies mottled with beige, black, and white: an indication that these bacteria produce dehydration-resistant spores that could help them survive at extreme altitudes.

Searching the skies for high-living microbes may also lead to insights concerning some species that we already do know about. Earth Science.