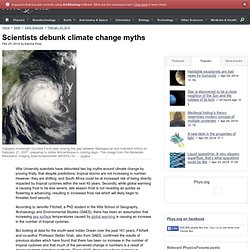 However, they are shifting, and South Africa could be at increased risk of being directly impacted by tropical cyclones within the next 40 years. Secondly, while global warming is causing frost to be less severe, late season frost is not receding as quickly as flowering is advancing, resulting in increased frost risk which will likely begin to threaten food security. According to Jennifer Fitchett, a PhD student in the Wits School of Geography, Archaeology and Environmental Studies (GAES), there has been an assumption that increasing sea surface temperatures caused by global warming is causing an increase in the number of tropical cyclones. The big surprise came when Fitchett and Grab looked at where storms have been happening. South Africa is already feeling the effects of this shift. If Yellowstone Could Talk, It Might Squeak. Blame The Helium : The Two-Way. Hide captionSunset on the Firehole River, Yellowstone National Park. 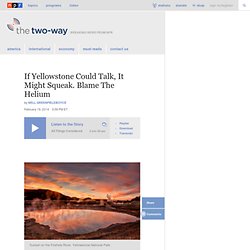 Bill Young/Flickr A huge amount of ancient helium is rising up from the rocks beneath Yellowstone National Park — about enough to fill up a Goodyear blimp every week. 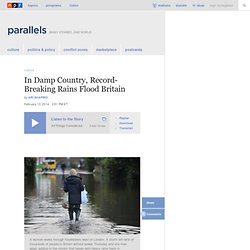 Now the floodwaters are lapping near Windsor Castle, as the Thames overflows its banks. You needn't travel far from central London to find the misery: A 20-minute train ride from the city brings you to West Byfleet. Hide captionPriscilla Smithers and her four children have arranged chairs around a few air mattresses to create a space for themselves, after fleeing their home. 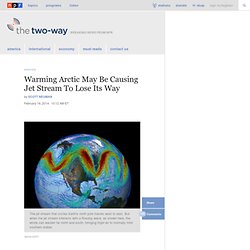 Getting Better At Predicting The Weather. After a brutal week of winter storms, the meteorological community is trying to improve the way weather is studied, predicted and communicated to the public. 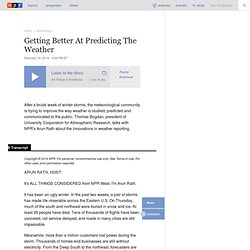 Thomas Bogdan, president of University Corporation for Atmospheric Research, talks with NPR's Arun Rath about the innovations in weather reporting. Copyright © 2014 NPR. For personal, noncommercial use only. See Terms of Use. For other uses, prior permission required. What Is The Psychological Effect Of Naming Storms? Copyright © 2014 NPR. 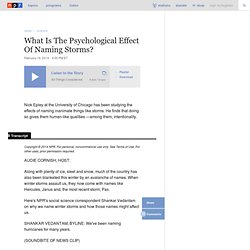 For personal, noncommercial use only. See Terms of Use. For other uses, prior permission required. Along with plenty of ice, sleet and snow, much of the country has also been blanketed this winter by an avalanche of names.

Blizzard Conditions Ahead. Everlasting Storm: Venezuela Wins Guinness Record for Most Lightning. Cloud Lab. Heavy Snow Belts East Coast; Southeast Ice Storm Leaves 700,000 Without Power. Anatomy of a Super Typhoon — NOVA Next. By any measure, Super Typhoon Haiyan was one of the most extraordinary tropical cyclones in world history. 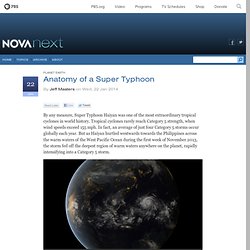 Tropical cyclones rarely reach Category 5 strength, when wind speeds exceed 155 mph. In fact, an average of just four Category 5 storms occur globally each year. But as Haiyan hurtled westwards towards the Philippines across the warm waters of the West Pacific Ocean during the first week of November 2013, the storm fed off the deepest region of warm waters anywhere on the planet, rapidly intensifying into a Category 5 storm. A Ridge with a Cloud on Top. Storm with 100 mph gusts hits soggy Britain - Weather, forecasts, news, blogs and maps. Updated: 2/12/2014 The Met Office said in a paper published this week that "there is no definitive answer" on the role played by climate change in the recent weather and floods. 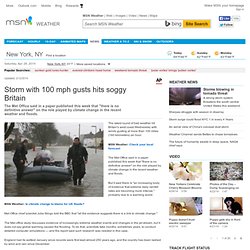 British Prime Minister David Cameron called an emergency meeting to discuss response to the worsening floods throughout Britain, which are forcing some residents to evacuate. Photo: AP, February 12, 2014 LONDON — Britain's weather service says it sees the tentacles of climate change in a spate of storms and floods battering the country, but has stopped short of saying warming directly caused the extreme storms.

The latest round of bad weather hit Britain's west coast Wednesday with winds gusting at more than 100 miles (160 kilometers) an hour. Science Behind The News: Tornadoes.