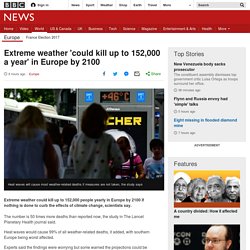 The number is 50 times more deaths than reported now, the study in The Lancet Planetary Health journal said. Heat waves would cause 99% of all weather-related deaths, it added, with southern Europe being worst affected. Experts said the findings were worrying but some warned the projections could be overestimated. Deaths caused by extreme weather could rise from 3,000 a year between 1981 and 2010 to 152,000 between 2071 and 2100Two in three people in Europe will be affected by disasters by 2100, against a rate of one in 20 at the start of the centuryThere will be a substantial rise in deaths from coastal flooding, from six victims a year at the start of the century to 233 a year by the end of it Experts from South Korea's Seoul National University warned that the study's results "could be overestimated".

Login. India climate: What do drowning rhinos and drought tell us? This week I went to the scene of terrible tragedy. 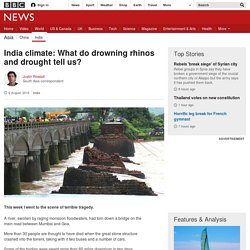 A river, swollen by raging monsoon floodwaters, had torn down a bridge on the main road between Mumbai and Goa. More than 30 people are thought to have died when the great stone structure crashed into the torrent, taking with it two buses and a number of cars. Some of the bodies were swept more than 60 miles downriver in two days. Image copyright AP We produced a short news report. In the heart-wrenchingly brutal calculus of the newsroom, this isn't a major story. India, indeed the whole South Asia region, has been riding a rollercoaster of extreme weather. UK Flooding - December 2015 on Flipboard. UK Heatwave 2003 on Flipboard. UK - Heavy Snow of 2009 on Flipboard. Cyclone Winston 2016 on Flipboard. 2009 Cumbria Floods - Cockermouth on Flipboard. 2013/2014 Floods in the UK on Flipboard. Typhoon Haiyan 2013 on Flipboard.

Typhoon Haiyan 2013 on Flipboard. Extreme weather. Find out in more detail about different types of extreme weather and what causes them. 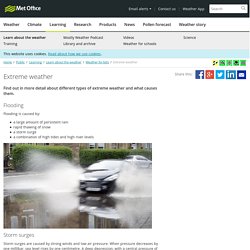 Flooding Flooding is caused by: a large amount of persistent rain rapid thawing of snow a storm surge a combination of high tides and high river levels Storm surges Storm surges are caused by strong winds and low air pressure. Storm surges create large waves. The greatest storm surge on record for the North Sea as a whole occurred on 31 January and 1 February 1953. Tropical cyclones A tropical cyclone is a low pressure system over tropical or sub-tropical waters, with convection (i.e. thunderstorm activity) and winds at low levels, circulating either anti-clockwise (in the northern hemisphere) or clockwise (in the southern hemisphere). Thunderstorms Most thunderstorms are associated with towering clouds known as cumulonimbus.

While air is rising it is said to be unstable. For example, on a summer's day, the land is warmed by the sun, and as the air just above becomes warmer it starts to rise. Lightning. UK climate - Extremes. Cumbria floods November 2009 — a look back. We take a look at how extensive flooding in Cumbria in November 2009 was made easier to deal with because of the warnings from the joint Met Office and Environment Agency Flood Forecasting Centre (FFC). 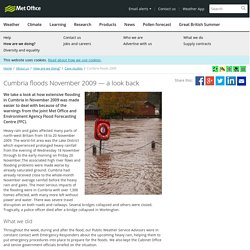 Heavy rain and gales affected many parts of north-west Britain from 18 to 20 November 2009. The worst-hit area was the Lake District which experienced prolonged heavy rainfall from the evening of Wednesday 18 November through to the early morning on Friday 20 November.The associated high river flows and flooding problems were made worse by already saturated ground.

Cumbria had already received close to the whole-month November average rainfall before the heavy rain and gales. The most serious impacts of the flooding were in Cumbria with over 1,300 homes affected, with many more left without power and water. There was severe travel disruption on both roads and railways. What we did Timeline Three days before flooding - Monday 16 November Early identification of disruption risk. Heavy rainfall/flooding in the Lake District, Cumbria - November 2009. Exceptionally prolonged and heavy rainfall on Wednesday 18 and Thursday 19 November led to severe flooding across parts of the Lake District. 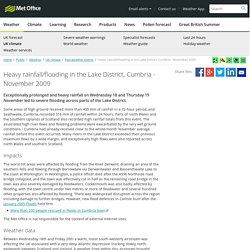 Some areas of high ground received more than 400 mm of rainfall in a 72-hour period, and Seathwaite, Cumbria, recorded 316 mm of rainfall within 24 hours. Parts of north Wales and the Southern Uplands of Scotland also recorded high rainfall totals from this event. The associated high river flows and flooding problems were exacerbated by the very wet ground conditions - Cumbria had already received close to the whole-month November average rainfall before this event occurred. Many rivers in the Lake District exceeded their previous maximum flows by a wide margin, and exceptionally high flows were also reported across north Wales and southern Scotland. Impacts More than 200 people rescued in floods in Cumbria town The Met Office is not responsible for the content of external internet sites. Weather data 24-hour rainfall totals 0900 19th to 0900 20th.