America and the World

Untitled. Our infamous drone war has largely faded from the headlines. 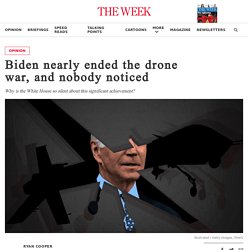 Aside from one strike that went horribly wrong during the U.S. evacuation from Afghanistan, there has been vanishingly little coverage of what's going on with the signature American tactic of the war on terror: remote-controlled death robots. So I was rather taken aback to discover President Biden has almost totally halted drone strikes, and airstrikes in general, around the world. It's a remarkable foreign policy reform, but also a remarkable failure of both government communication and media coverage. A hugely significant change in foreign policy has happened — and almost nobody is paying attention. Not long ago, the drone war was subject to fierce public debate.

The drone strike was thus the perfect tool for his presidency: a cheap, high-tech, and supposedly super-accurate method of fighting terrorism (and extending U.S. military hegemony) at no risk to American soldiers. Whatever the reason, this silence is a mistake. Untitled. Untitled. The American mainstream media is throwing a classic tantrum over President Biden's decision to withdraw from Afghanistan. 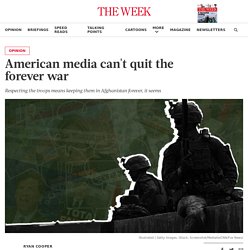 We've got the hastily-assembled pieces telling the story of what happened in elaborate detail, "hard-hitting" interviews, thousands of op-eds, and cable news coverage so obsessive and breathless that even MSNBC barely interrupted Afghanistan coverage to mention that a Trump-supporting terrorist with an apparent truck bomb was threatening to blow up the Capitol building on Thursday. (Conservative white terrorists don't really count, it seems.) At a White House press conference Friday, reporters pressed Biden with highly unusual aggressiveness. The American mainstream press, particular its television outlets, just can't quit the forever war. Untitled.

Untitled. And with the United States gone, the Taliban will also have to navigate their survival while swimming alone with some real sharks — Pakistan, India, China, Russia and Iran. 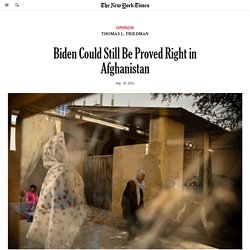 Untitled. It feels more like the early 20th century than a modern conflict, with tired, nervous soldiers gripping their rifles around him as they reach open ground, scanning the area for movement across no-mans-land. 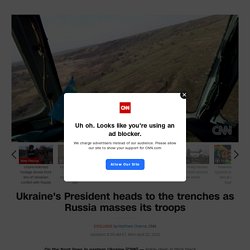 They know snipers, likely trained by Russians, say Ukrainian officials are looking for a chance to fire. More than 20 of their comrades have been gunned down already this year. It's eerily quiet with an occasional crack of a gunshot in the distance shattering the calm, keeping everybody on edge. This area near Mariupol is a risky place for the President of a country to visit, but that doesn't stop Zelensky who granted CNN unprecedented access to his trip to the front lines, where he insists on going to the most forward positions.

"If I visit a military base, the guys at the very front will hear about it and think I forgot about them," Zelensky told CNN in exclusive comments over two days. Untitled. Untitled. Iran’s leadership reacted angrily but cautiously to the assassination. 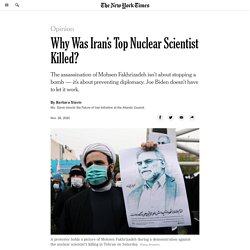 President Hassan Rouhani has said that Iran will respond in a manner and at a time of its own choosing. He blamed Israel, adding, “This brutal assassination shows that our enemies are passing through anxious weeks, weeks that they feel their pressure era is coming to an end and the global conditions are changing.” That statement suggests that Iran will seek revenge against Israel in some other form. Iran may increase its support for Hamas or Palestinian Islamic Jihad. It will ensure that Israel remains “the lesser Satan” in Iranian propaganda for the foreseeable future, and Israeli soft targets — such as tourists and students — could be at risk, along with Israeli officials overseas.

Untitled. But a key result is that as Biden considers reopening negotiations to revive the Iran nuclear deal — which Trump abandoned in 2018 — he can expect to find Israel, Saudi Arabia, Bahrain and the United Arab Emirates operating as a loose anti-Iran coalition. 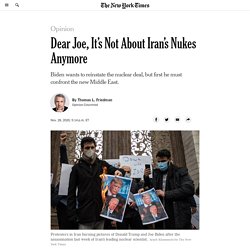 This will almost certainly complicate things for Biden, owing to the second huge fallout from the Iranian attack on Abqaiq: The impact it had on Israel. After Trump scrapped the nuclear deal, Iran abandoned its commitments to restrict its enrichment of uranium that could be used for a nuclear bomb. But since Biden’s election, Iran has said it would “automatically” return to its nuclear commitments if Biden lifts the crippling sanctions imposed by Trump.

Only after those sanctions are lifted, said Tehran, might it discuss regional issues, like curbs on Iran’s precision missile exports and capabilities. Untitled. The Palestinian Authority, led by Mahmoud Abbas, was also stripped of something by this deal, which may force him to the negotiating table. 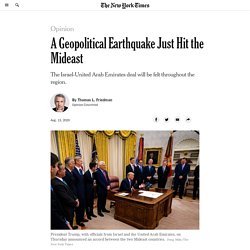 It stripped him of his biggest ace in the hole — the idea that the gulf Arabs would normalize with Israel only after the Israelis satisfied the demands of the Palestinian Authority with a state to its liking. (Free advice for Abbas: Come back to the table now and say you view the Trump plan as a “floor,” not a “ceiling” for Palestinian aspirations. Untitled. Bloomberg - Are you a robot? Gold star husband: On Syria withdrawal, Trump is right (opinion) The President's detractors on both sides of the aisle are frantically arguing that we have "abandoned" the Kurds and that without a permanent US presence in Syria ISIS will return. 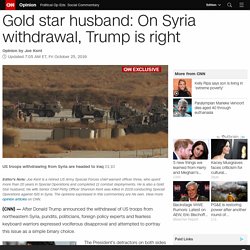 These emotional arguments ignore reality on several key issues. US airstrike killed dozens of Russians in Syria, but Moscow stays silent. The Kremlin has downplayed reports of mass casualties, not named any of those who died and not said why they were there in the first place. 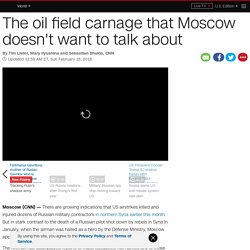 But families of the dead men are starting to ask questions. And details of just why the mercenaries were in the oil-rich region -- and the target of their ill-fated operation -- are starting to emerge. The Russians were working for a paramilitary company called Wagner, which has hundreds of contractors on the ground in Syria, helping both the Russian military and pro-regime forces. The mission of that night's operation remains unclear, but the forces were advancing towards a valuable oil and gas field, Coneco, controlled by the Syrian Democratic Forces (SDF), a US-backed militia that has been fighting ISIS in Syria.

The secret backstory of how Obama let Hezbollah off the hook. After Obama won reelection in November 2012, the administration’s pushback on Hezbollah drug cases became more overt, and now seemed to be emanating directly from the White House, according to task force members, some former U.S. officials and other observers. 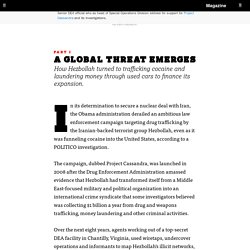 One reason, they said, was Obama’s choice of a new national security team. The appointment of John Kerry as secretary of state was widely viewed as a sign of a redoubled effort to engage with Iran. Obama’s appointment of Brennan — the public supporter of cultivating Hezbollah moderates — as CIA director, and the president’s choice of the Justice Department’s top national security lawyer, Lisa MonacoLisa MonacoLisa Monaco replaced John Brennan as the White House counterterrorism and homeland security adviser.×, as Brennan’s replacement as White House counterterrorism and homeland security adviser, put two more strong proponents of diplomatic engagement with Iran in key positions. Raasch: Ken Burns, myth buster, and Vietnam's real lessons for today.

WASHINGTON • Ken Burns’ “The Vietnam War,” a documentary 10 years in the making about a war that has been generations in the healing, has provided a very valuable service. The filmmaker has shown in vivid terms the fallacy of data dependency in the course of human events. If Donald Trump’s 2016 victory — which discombobulated virtually everyone with a microphone or exit poll on Election Night — didn't teach that lesson, perhaps the long view back to Vietnam that Burns takes in his PBS series can.

There are many scenes in "Vietnam" that bring stark clarity to the moral grayness and political calculus that led to the war and its continuation for years despite the private doubts of public men. When hubris trumps humanity, real people die. This is Burns’ gift: Boiling complex topics to bare truths, so viewers can re-enter the moral and political thickets of war armed with their own sense of what matters, and to try to understand what made leaders act the way they did. The Risk of Nuclear War with North Korea. 1. The Madman Theory The United States has no diplomatic relations with North Korea, so there is no embassy in Washington, but for years the two countries have relied on the “New York channel,” an office inside North Korea’s mission to the United Nations, to handle the unavoidable parts of our nonexistent relationship.

The Madman and the Bomb. The scene from the White House south lawn on August 9, 1974, is vivid in the nation’s memory. That morning, President Richard Nixon famously boarded Marine One for the final time, put on a wide grin and fired off a final double-V to the assembled crowd. General McChrystal Story by Michael Hastings Inspired 'War Machine,' Starring Brad Pitt - Rolling Stone.

'How'd I get screwed into going to this dinner? " Remembering Elie Wiesel. On the front lines of the fight for the Islamic State’s capital of Raqqa, Syria. Huffingtonpost. After I Lived in Norway, America Felt Backward. Here’s Why. Some years ago, I faced up to the futility of reporting truths about America’s disastrous wars, and so I left Afghanistan for another mountainous country far away.

Who Is Fighting Whom in Syria. Photo The Syrian civil war, now in its fifth year, involves multiple countries with overlapping and at times conflicting agendas. The rise of Islamic State. Battle for Iraq and Syria in maps. Islamic State (IS) militants made some major territorial gains in south-western Syria in 2015 - but they lost several key towns in Iraq, as well as parts of Syria's northern border with Turkey. 60 Minutes Abu Ghraib Dan Rather.