How the Mayan Calendar Works" 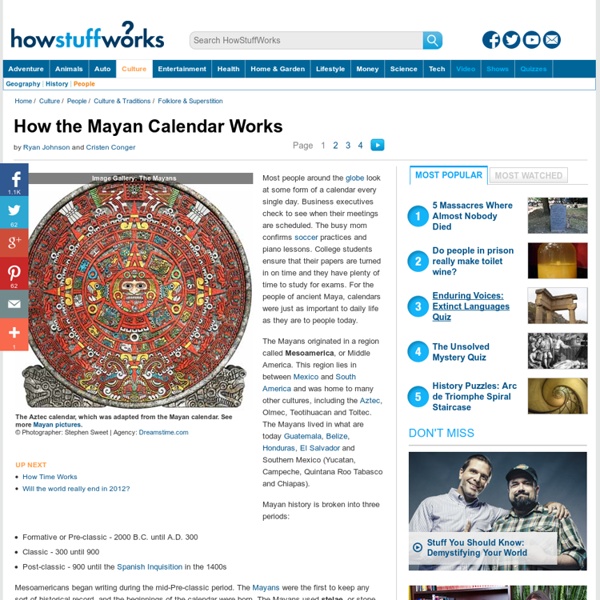 Mayan mathematics Version for printing Hernán Cortés, excited by stories of the lands which Columbus had recently discovered, sailed from Spain in 1505 landing in Hispaniola which is now Santo Domingo. After farming there for some years he sailed with Velázquez to conquer Cuba in 1511. He was twice elected major of Santiago then, on 18 February 1519, he sailed for the coast of Yucatán with a force of 11 ships, 508 soldiers, 100 sailors, and 16 horses. He landed at Tabasco on the northern coast of the Yucatán peninsular. The people of the Yucatán peninsular were descendants of the ancient Mayan civilisation which had been in decline from about 900 AD. In order to understand how knowledge of the Mayan people has reached us we must consider another Spanish character in this story, namely Diego de Landa. However, despite being sympathetic to the Mayan people, Landa abhorred their religious practices. A small number of Mayan documents survived destruction by Landa. The Dresden codex: The second example yet

History - Ancient History in depth: The Fall of the Mayan Civilisation Maya The Classic Period, which began around A.D. 250, was the golden age of the Maya Empire. Classic Maya civilization grew to some 40 cities, including Tikal, Uaxactún, Copán, Bonampak, Dos Pilas, Calakmul, Palenque and Río Bec; each city held a population of between 5,000 and 50,000 people. At its peak, the Maya population may have reached 2,000,000. Excavations of Maya sites have unearthed plazas, palaces, temples and pyramids, as well as courts for playing the ball games that were ritually and politically significant to Maya culture. The Maya were deeply religious, and worshiped various gods related to nature, including the gods of the sun, the moon, rain and corn. The Classic Maya built many of their temples and palaces in a stepped pyramid shape, decorating them with elaborate reliefs and inscriptions. Serious exploration of Classic Maya sites began in the 1830s.

Collapse: The Maya The ancient Maya once occupied a vast geographic area in Central America. Their civilization extended to parts of what is now Mexico, Honduras, and El Salvador, and most of Guatemala and Belize. From the third to the ninth century, Maya civilization produced awe-inspiring temples and pyramids, highly accurate calendars, mathematics and hieroglyphic writing, and a complex social and political order. Looking at the impressive remains of ancient Maya civilization, it's hard to imagine how such a society could collapse. Looking for clues at Copán Clues to this collapse can be found at Copán, a Maya site in western Honduras. In spite of its wealth, power, and size, Copán collapsed. society collapsed more gradually? What really happens when a society collapses?

The Mayan Calendar El Castillo. Chichen Itza, Yucatan, Mexico. This Mesoamerican step pyramid’s platform, along with its four stairways of 91 steps, totals 365, or the number of days in a calendar year. Aztec Calendar. The Aztec calendar was an adaptation of the Mayan calendar. Among their other accomplishments, the ancient Mayas invented a calendar of remarkable accuracy and complexity. The Maya calendar was adopted by the other Mesoamerican nations, such as the Aztecs and the Toltec, which adopted the mechanics of the calendar unaltered but changed the names of the days of the week and the months. The Maya calendar uses three different dating systems in parallel, the Long Count, the Tzolkin (divine calendar), and the Haab (civil calendar). A typical Mayan date looks like this: 12.18.16.2.6, 3 Cimi 4 Zotz. What is the Long Count? The Long Count is really a mixed base-20/base-18 representation of a number, representing the number of days since the start of the Mayan era. When did the Long Count Start?

Mystery of the Maya - Maya civilization The Maya are probably the best-known of the classical civilizations of Mesoamerica. Originating in the Yucatán around 2600 B.C., they rose to prominence around A.D. 250 in present-day southern Mexico, Guatemala, northern Belize and western Honduras. Building on the inherited inventions and ideas of earlier civilizations such as the Olmec, the Maya developed astronomy, calendrical systems and hieroglyphic writing. The Maya were noted as well for elaborate and highly decorated ceremonial architecture, including temple-pyramids, palaces and observatories, all built without metal tools. They were also skilled farmers, clearing large sections of tropical rain forest and, where groundwater was scarce, building sizeable underground reservoirs for the storage of rainwater. The Maya were equally skilled as weavers and potters, and cleared routes through jungles and swamps to foster extensive trade networks with distant peoples. Backgrounders: Peoples, Geography and Languages Maya Society Astronomy

Mayan Numbers" Along with their calendars -- the Tzolk'in, the Haab and the Long Count -- the Mayans also created their own math system. They used a series of dots and bars to signify numbers. One dot equaled one unit, while one bar equaled five units. A shell symbol signified zero. In a system similar to the one we use now, the Mayans used place values to designate large numbers. Mayans' place values are vertical, whereas ours are horizontal. Numbers held great significance in the Mayan culture. Maya Civilization The Maya are an indigenous people of Mexico and Central America who have continuously inhabited the lands comprising modern-day Yucatan, Quintana Roo, Campeche, Tabasco, and Chiapas in Mexico and southward through Guatemala, Belize, El Salvador and Honduras. The designation Maya comes from the ancient Yucatan city of Mayapan, the last capital of a Mayan Kingdom in the Post-Classic Period. The Maya people refer to themselves by ethnicity and language bonds such as Quiche in the south or Yucatec in the north (though there are many others). The `Mysterious Maya’ have intrigued the world since their `discovery’ in the 1840's by John Lloyd Stephens and Frederick Catherwood but, in reality, much of the culture is not that mysterious when understood. MAYA Origins The Olmec Period: 1500-200 BCE – This era is also known as the Pre-Classic or Formative Period when the Olmecs, the oldest culture in Mesoamerica, thrived. The Lost Gods: The Maya (Planet Knowledge) MAYA Culture MAYAN Hieroglyphics

Maya Civilization Geography and Landscape The ancient Maya civilization occupied the eastern third of Mesoamerica, primarily the Yucatan Peninsula. The topography of the area greatly varied from volcanic mountains, which comprised the highlands in the South, to a porous limestone shelf, known as the Lowlands, in the central and northern regions. The southern portion of the Lowlands were covered by a rain forest with an average height of about 150 feet. Many dangerous animals occupied this region of the peninsula including the jaguar, the caiman (a fierce crocodile), the bull shark, and many species of poisonous snakes. Both the Highlands and the Lowlands were important to the presence of trade within the Mayan civilization. The volcanic highlands, however, were the source of obsidian, jade, and other precious metals like cinnabar and hematite that the Mayans used to develop a lively trade. The Maya Culture Mayan Writing Four books are known today: Political Organization Mayan Art

Ancient Mayans likely had fountains and toilets - Technology & science - Science - LiveScience The ancient Mayans may have had enough engineering know-how to master running water, creating fountains and even toilets by controlling water pressure, scientists now suggest. Perhaps the earliest known example of the intentional creation of water pressure was found on the island of Crete in a Minoan palace dating back to roughly 1400 BC. In the New World, the ability to generate water pressure was previously thought to have begun only with the arrival of the Spanish. Scientists investigated the Mayan center at Palenque in Chiapas, Mexico. At its height, this major site, inhabited from roughly 100 to 800 AD, had some 1,500 structures — residences, palaces, and temples — holding some 6,000 inhabitants under a series of powerful rulers. The center at Palenque also had what was arguably the most unique and intricate system of water management known anywhere in the Maya lowlands. One peculiar finding at Palenque was a buried, spring-fed conduit some 216 feet long (66 m).

Mayan Civilization City of Copan, Honduras Copán, called Xukpi by its residents, rises out of the mist of western Honduras, in a pocket of alluvial soil amid rugged topography. It is arguably one of the most important royal sites of the Maya civilization. Occupied between AD 400 and 800, Copán covers over 50 acres of temples, altars, stelae, ball courts, several plazas and the magnificent Hieroglyphic Stairway. The culture of Copán was rich in written documentation, today including detailed sculptural inscriptions, which is very rare in precolumbian sites. Sadly, many of the books--and there were books written by the Maya, called codices--were destroyed by the priests of the Spanish invasion. Explorers of Copán The reason we know so much of the inhabitants of the site of Copán is the result of five hundred years of exploration and study, beginning with Diego García de Palacio who visited the site in 1576. Translating Copan Daily Life at Copan Copán and the Maya Collapse Sources