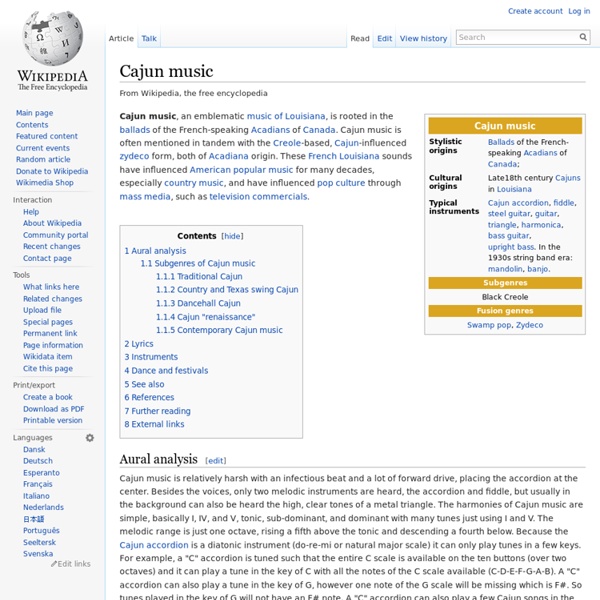 Cajun music, an emblematic music of Louisiana, is rooted in the ballads of the French-speaking Acadians of Canada. Cajun music is often mentioned in tandem with the Creole-based, Cajun-influenced zydeco form, both of Acadiana origin. These French Louisiana sounds have influenced American popular music for many decades, especially country music, and have influenced pop culture through mass media, such as television commercials. Aural analysis[edit] Cajun music is relatively harsh with an infectious beat and a lot of forward drive, placing the accordion at the center. Besides the voices, only two melodic instruments are heard, the accordion and fiddle, but usually in the background can also be heard the high, clear tones of a metal triangle. Subgenres of Cajun music[edit] Traditional Cajun[edit] Country and Texas swing Cajun[edit] Main article: Western swing This style involves heavy elements of Texas country music influence and a move away from the traditional accordion. Dancehall Cajun[edit]

Zydeco Zydeco is a musical genre evolved in southwest Louisiana by French Creole speakers[1] which blends Cajun music, blues and rhythm and blues. Origin of term[edit] Though disputed, it is commonly suggested that "zydeco" derives from the French phrase Les haricots ne sont pas salés, which, when spoken in the Louisiana Creole French, sounds as "leh-zy-dee-co nay sohn pah salay". This literally translates as "the snap beans aren't salty" but idiomatically as "I have no spicy news for you."