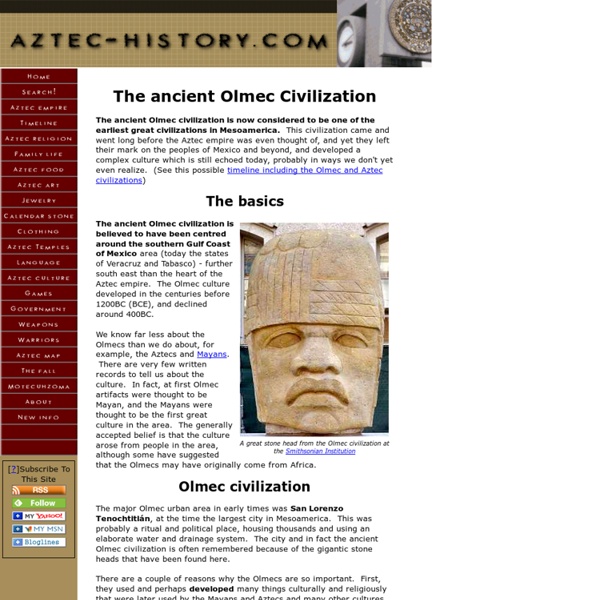 The ancient Olmec civilization is now considered to be one of the earliest great civilizations in Mesoamerica. This civilization came and went long before the Aztec empire was even thought of, and yet they left their mark on the peoples of Mexico and beyond, and developed a complex culture which is still echoed today, probably in ways we don't yet even realize. (See this possible timeline including the Olmec and Aztec civilizations) The basics The ancient Olmec civilization is believed to have been centred around the southern Gulf Coast of Mexico area (today the states of Veracruz and Tabasco) - further south east than the heart of the Aztec empire. We know far less about the Olmecs than we do about, for example, the Aztecs and Mayans. Olmec civilization The major Olmec urban area in early times was San Lorenzo Tenochtitlán, at the time the largest city in Mesoamerica. There are a couple of reasons why the Olmecs are so important. Influence of the Olmecs Related:  South America

Ancient Olmec Trade and Economy Ancient Olmec Trade and Economy: The Olmec culture thrived in the humid lowlands of Mexico's gulf coast from about 1200-400 B.C. They were great artists and talented engineers who had a complex religion and worldview. Although much information about the Olmecs has been lost to time, archaeologists have succeeded in learning much about their culture from several excavations in and around the Olmec homeland. Among the interesting things they have learned is the fact that the Olmec were diligent traders who had many contacts with contemporary Mesoamerican civilizations. Mesoamerican Trade before the Olmec: By 1200 B.C., the people of Mesoamerica – present-day Mexico and Central America – were developing a series of complex societies. The Dawn of the Olmec: One of the accomplishments of Olmec culture was the use of trade to enrich their society. The Olmec were skilled artisans, whose pottery, celts, statues and figurines proved popular for commerce. Olmec Economy: The Olmec and the Mokaya:

Two Indigenous Solar Engineers Changed Their Village in Chile Liliana Terán, left, and her cousin Luisa, members of the Atacameño indigenous people, are grassroots solar engineers trained at the Barefoot College in northwest India. By installing solar panels in their northern Chilean village, Caspana, they have changed their own lives and those of their fellow villagers. (Photo: Marianela Jarroud/IPS) Liliana and Luisa Terán, two indigenous women from northern Chile who travelled to India for training in installing solar panels, have not only changed their own future but that of Caspana, their remote village nestled in a stunning valley in the Atacama desert. "It was hard for people to accept what we learned in India," Liliana Terán told IPS. Her cousin, Luisa, said that before they travelled to Asia, there were more than 200 people interested in solar energy in the village. "In this village there is a council of elders that makes the decisions. Luisa, 43, practices sports and is a single mother of an adopted daughter. They did not go alone.

This is What Michael Jackson Sounds Like in Quechua Even the youngs think Quechua is cool. After the language was translated for a book, a song, and given a shoutout by a fútbolero, we started thinking that Quechua was having a sort of moment. Perhaps the biggest sign of this is that a 14-year-old girl named Renata Flores sang a Quechua version of Michael Jackson’s “The Way You Make Me Feel.” The Ayacuchana sings the tune at the Vilcashuamán ruins, as guitars and a Peruvian cajón play. According to La Republica, the video is part of the Asociación Cultural SURCA, which works to get the youth to learn the importance of Quechua. Isolated tribespeople receiving care after violent contact in Brazil In the wake of several encounters, Brazilian government workers are tending to 21 formerly isolated Korubo people in a remote corner of the Brazilian Amazon. A recent statement by the National Indian Foundation (FUNAI), the Brazilian agency charged with protecting indigenous peoples, reports that settled Matis villagers had attacked Korubo last December, leaving at least eight dead. The killings apparently were in revenge, as Korubo had killed two Matis a few days earlier. The tragic events are fueling ongoing debate about how to manage the process of contact between isolated and settled indigenous people. The most recent events, which occurred in the Vale do Javari indigenous territory, are the latest in a series of sometimes-hostile encounters between Matis and isolated Korubo that began in December 2014, when a group of isolated Korubo killed two Matis men. So instead of contact, FUNAI helped the Matis village relocate to another area in order to prevent conflict.

Researchers confirm: The Largest Pyramid in Mexico has been found Researchers discover immense pyramid in Mexico, larger than Teotihuacan’s Pyramid of the Sun. Researchers in Mexico have discovered a Pyramid that, according to initial measurements, is larger than the Great Pyramid of the Sun in Teotihuacan. Initial excavations were done in 2010. The Pyramid, 75 meters in height, was explored by specialists from the National Institute of Anthropology and History (INAH) on the acropolis of Tonina, Chiapas, estimated to be around 1700 years old. Emiliano Gallaga, director of the archaeological zone, explained that work has been done in the last two years, and by means of a “three-dimensional, researchers verified that in the northeastern part of the site, stands one of the largest construction in Mesoamerica, comparable in size only to great Mayan cities like Tikal and El Mirador in Guatemala. “It’s a big surprise to see that the pyramid was done almost entirely by pre-Hispanic architects and therefore is more artificial than natural.

Nahuatl (Aztec) Family The Nahuatl (or Nahua) languages form the southernmost family of the Uto-Aztecan stock. Nahuatl has over a million and a half speakers, more than any other family of indigenous languages in Mexico today. The name “Nahuatl” (pronounced in two syllables, ná-watl) comes from the root nahua ([nawa]) which means ‘clear sound’ or ‘command’. The areas marked in green on the map are the traditional Nahuatl homelands where the Nahuatl languages are still spoken today. Nahuatl is known world-wide because of the Aztecs, also called the “Mexica” (pronounced approximately “may-she-kah”). Which is the correct form: Nahua, Nahuatl, Nahuat, or Nahual? ...and more. Linguistic structure of Nahuatl Specific varieties of languages in the Nahuatl Family Publications by the Summer Institute of Linguistics and its members Linguistics Literacy and literature Various fields For more information: The Aztec calendar that appears at the top of this page is in the National Museum of Anthropology in Mexico City.

Tarlton Law Library - Aztec and Maya Law - online exhibit The Aztec empire was made up of a series of city-states known as altepetl. Each altepetl was ruled by a supreme leader (tlatoani) and a supreme judge and administrator (cihuacoatl). The tlatoani of the capital city of Tenochtitlan served as the Emperor (Huey Tlatoani) of the Aztec empire. The tlatoani was the ultimate owner of all land in his city-state, received tribute, oversaw markets and temples, led the military, and resolved judicial disputes. New emperors were elected by a high council of four nobles who were related to the previous ruler. Sources: Aguilar-Moreno (2006), Almazan (1999), Avalos (1994), and Seus (1969). Image Information: The Palace of Montecuhzoma.

Peru: Mercury poisoning “epidemic” sweeps tribe A huge proportion of the Nahua tribe have been affected by the poisoning, which causes anemia and acute kidney problems © Johan Wildhagen Up to 80% of a recently-contacted tribe in Peru have been poisoned with mercury, raising serious concerns for the future of the tribe. One child has already died displaying symptoms consistent with mercury poisoning. The source of the Nahua tribe’s poisoning remains a mystery, but experts suspect Peru’s massive Camisea gas project, which opened up the tribe’s land in the 1980s, may be to blame. Rampant illegal gold mining in the region is another potential source of the mercury poisoning. The Nahua, who live inside a reserve for isolated Indians in south-east Peru, have also been suffering from acute respiratory infections and other health problems since they were contacted. Other indigenous communities in the area may also have been affected by mercury contamination, but tests have not been carried out. The Nahua were first contacted in the 1980s.

Sarayaku: People of the Zenith "When others have surrendered, Sarayaku will not back down." Deep in Ecuador's Amazon rainforest live the Kichwa people of Sarayaku. Their name means "pueblo del medio dia," or the People of the Zenith, after the time when the sun reaches its highest point above their forestlands. But instead of becoming another story of pollution and devastation, the story of Sarayaku has been one of resistance. 2012 was a year of groundbreaking victories for the people of Sarayaku. These victories stem from the concerted efforts of the people of Sarayaku to build a network of national and international allies and to employ international human rights instruments in their defense. The fight is not over for the people of Sarayaku. A Kichwa Victory Against Big Oil and Government in New Documentary October 10, 2012Indian Country Today Sarayaku Celebrates Human Rights Victory August 16, 2012 Governments Prioritize Profit Over Indigenous Peoples' Rights August 8, 2012Amnesty International August 2012 July 26, 2012