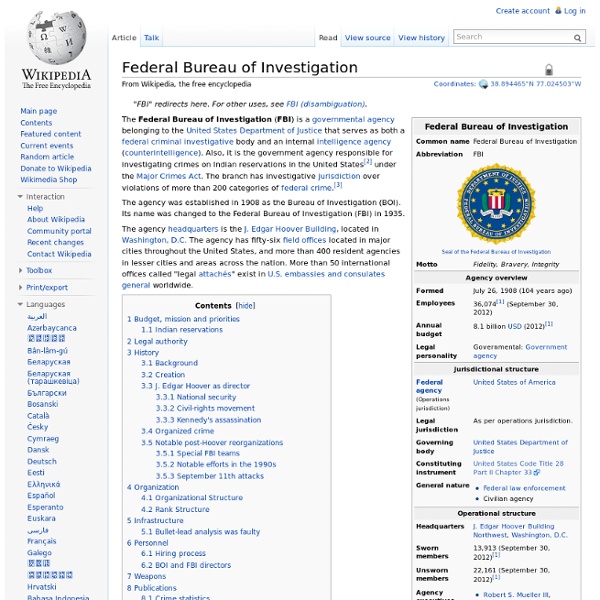 The Federal Bureau of Investigation (FBI) is a governmental agency belonging to the United States Department of Justice that serves as both a federal criminal investigative body and an internal intelligence agency (counterintelligence). Also, it is the government agency responsible for investigating crimes on Native American reservations in the United States[2] under the Major Crimes Act. The FBI has investigative jurisdiction over violations of more than 200 categories of federal crime.[3] The bureau was established in 1908 as the Bureau of Investigation (BOI). Budget, mission and priorities In the fiscal year 2012, the bureau's total budget was approximately $8.12 billion.[4] The FBI's main goal is to protect and defend the United States, to uphold and enforce the criminal laws of the United States, and to provide leadership and criminal justice services to federal, state, municipal, and international agencies and partners.[3] Currently, the FBI's top investigative priorities are:[5] J.

The FBI From Wikipedia, the free encyclopedia The Federal Bureau of Investigation (FBI) is an agency of the United States Department of Justice that serves as both a federal criminal investigative body and an internal intelligence agency. The FBI has investigative jurisdiction over violations of more than 200 categories of federal crime.[2] Its motto is "Fidelity, Bravery, Integrity", corresponding to the FBI initials. The FBI's headquarters, the J. Edgar Hoover Building, is located in Washington, D.C.. Fifty-six field offices are located in major cities throughout the United States as well as over 400 resident agencies in smaller cities and towns across the country. Mission and priorities In the fiscal year 2008, the FBI's total budget was approximately $6.8 billion, including $410 million in program increases to counter-terrorism, counter-intelligence, cybercrime, information technology, security, forensics, training, and criminal programs. Legal authority History The J. When President John F.

Federal Bureau of Investigation Organizational Culture | Justice and Security This essay will discuss the organizational culture of the Federal Bureau of Investigation. A discussion of the historical aspects of the Federal Bureau of Investigation (hereinafter referred to as “FBI”) will occur as well as a comparison and contrast of the disparity between the FBI and the Central Intelligence Agency. Key characteristics of the FBI will be highlighted as well as a determination made as to whether or not the organization supports and fosters changes. Insight will be provided towards the futuristic aspects of the FBI. Discussion The FBI is one of the most distinguished branches of federal law enforcement. History of the FBI In 1908, the FBI was created from Special Agents during the Theodore Roosevelt presidency. These men were both visionaries in that expertise and efficiency played a more important role than politics when determining what would be most beneficial to government service. Key Characteristics of the FBI Organization between agencies. Deputy Director John S.

FBI揭秘 | Bowenwang 联邦调查局是美国权力最大的政府机构。有些人甚至将其称为世界上最大的执法机构。该机构在其100年的历史中，曾处于多起臭名昭著的案件的核心，有些案件取得了成功，有些则备受争议。在恐怖主义盛行的时代，FBI仍然像以前一样复杂而且大权在握。 在本文中，我们将介绍FBI的职责范围和成立过程以及如何才能成为一名FBI特工。 FBI是美国司法部的调查机构，该机构的具体使命不断变化。 根据该机构的网站： FBI的官方使命是：通过调查违反联邦刑法的行为来维护法律，保护美国免受外国间谍和恐怖分子活动的威胁，为联邦、州、地方或国际机构提供领导和执法帮助，并且能按照公众的需要且在遵守美国宪法的前提下履行上述职责。 为澄清有关FBI的一些不实说法，下面介绍该机构不承担的一些工作： 该机构并不是国家的警察部门；州和地方执法机构并不是FBI的下属机构。 FBI特工可以携带武器，他们在使用武器时和美国所有其他执法机构一样都受到相同的规定限制。 FBI的组织结构 FBI是美国司法部的一个部门，由美国司法部长领导。 FBI的主管由总统任命，任期10年。 FBI的总部位于华盛顿特区的J. 截至2006年3月31日，FBI共雇用了30,000多名员工，其中包括12,515名特工以及17,485 支持人员、实验室技术人员和管理人员。 Research and Analysis Wing Headquartered in New Delhi, R&AW's current chief is Alok Joshi a 1976-batch IPS officer of Haryana cadre.[9] History[edit] Background: 1933–68[edit] In 1947, after independence, Sanjeevi Pillai took over as the first Indian Director of the IB. RAW: 1968–present[edit] The framework of Indian intelligence R&AW started as a wing of the main Intelligence Bureau with 250 employees and an annual budget of 20 million (US$324,000.00). 300 million (US$4.9 million) while its personnel numbered several thousand. Slowly other child agencies like The Radio Research Center and Electronics & Tech. Objectives[edit] The present R&AW[21] objectives include, and are not limited to: In the past, following the Sino-Indian war of 1962 and due to India's volatile relations with Pakistan, R&AW's objectives had also consisted the following: To watch the development of international communism and the schism between the two big communist nations, the Soviet Union and China. Organisational Structure[edit] Recruitment[edit]

Huawei United States - Strategy Resonating with the revolutionary changes taking place in the information industry, Huawei continuously innovates to meet customer needs and advance our technological leadership. We openly cooperate with industry partners, focus on building future-proof information pipes, and continuously create value for our customers and society at large. Based on these value propositions, Huawei is dedicated to enriching life and improving efficiency through a better connected world. In addition, we strive to be the first choice and best partner for telecom carriers and enterprise customers while becoming a brand of choice among consumers. Ubiquitous Broadband The Internet makes it easier to disseminate and obtain information, and stimulates people's desire to go online anytime, anywhere using any device. Agile Innovation The ICT industry is still developing rapidly. The next 30 years will witness the gradual replacement of private data centers by public cloud data centers. Inspired Experience

Huawei Huawei Technologies Co. Ltd. (The company's own apparently preferred English pronunciation seems to be: /ˈwɑːweɪ/ (same as the words "wah-way" although in the correct Chinese pronunciation the "h" is not silent and is pronounced as "hwa-way"),[3] Chinese: 华为 Huáwéi) is a Chinese multinational networking and telecommunications equipment and services company headquartered in Shenzhen, Guangdong.[4] It is the largest telecommunications equipment maker in the world, having overtaken Ericsson in 2012.[5] Huawei was founded in 1987 by ex-military officer Ren Zhengfei and formed as a private company owned by its employees. In 2010, Huawei recorded profit of 23.8 billion CNY (3.7 billion USD).[14] Its products and services have been deployed in more than 140 countries and it currently serves 45 of the world's 50 largest telecoms operators.[15] History[edit] Early years[edit] International expansion[edit] Investment and partnerships[edit] Recent performance[edit] Corporate affairs[edit] Ownership[edit]

US-India Intelligence Officials Meet To Discuss Afghanistan Despite a diplomatic row, U.S. and Indian intelligence officials are meeting to discuss the future of Afghanistan. In a sign that the dust may have begun to settle over the Khobragade affair that froze normally warm U.S.-India relations, the two countries began a three-day intelligence meeting on Afghanistan yesterday. According to The Hindu, the meeting is the first instance of high-level dialogue between India and the United States since the diplomat’s arrest in New York stirred up an indignant storm across India and led to a deterioration in ties. Just six days ago, U.S. Energy Secretary Ernest Moniz was forced to cancel a scheduled trip to India as part of the fallout over the diplomat’s arrest. An Indian delegation led by Joint Intelligence Chief (JIC) Ajit Lal met officials from the United States Director of National Intelligence’s (DNI) office for a round of discussions on regional security and strategic issues surrounding the 2014 U.S. drawdown in Afghanistan.