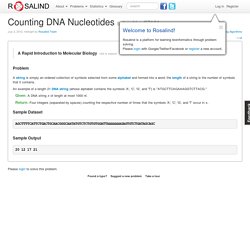 A 1900 drawing by Edmund Wilson of onion cells at different stages of mitosis. BioWar: Project. Overview | Sponsors | Software In trying to prepare for attacks, policy makers need to be able to think through the consequences of their decisions in various situations. 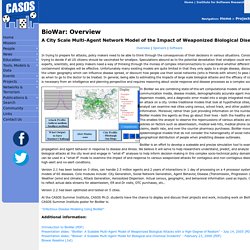 Consider, for example, trying to decide if all US citizens should be vaccinated for smallpox. Speculations abound as to the potential devastation that smallpox could wreak. Medical experts, scientists, and policy makers need a way of thinking through the morass of complex interconnections to understand whether different inoculation or containment strategies will be effective. Unfortunately many existing models are quite limited in that they only apply to a single disease, discount factors such as the urban geography which can influence disease spread, or discount how people use their social networks (who is friends with whom) to pass information such as when to go to the doctor to be treated. 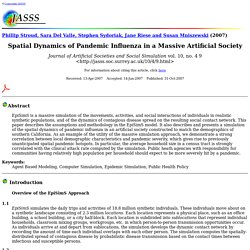 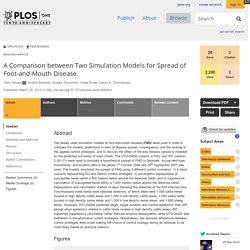 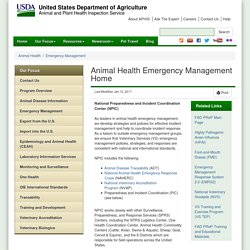 In 2016, well before the change of Administration, APHIS decided to make adjustments to the posting of regulatory records. In addition, APHIS is currently involved in litigation concerning, among other issues, information posted on the agency’s website. While the agency is vigorously defending against this litigation, in an abundance of caution, the agency is taking additional measures to protect individual privacy. These decisions are not final. Adjustments may be made regarding information appropriate for release and posting. From scenario planning to stress testing: The next step for energy companies. Utilities and oil and gas firms have long used scenario analysis, but extraordinary times call for new measures. 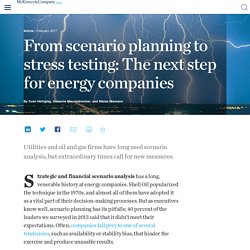 Strategic and financial scenario analysis has a long, venerable history at energy companies. Shell Oil popularized the technique in the 1970s, and almost all of them have adopted it as a vital part of their decision-making processes. But as executives know well, scenario planning has its pitfalls; 40 percent of the leaders we surveyed in 2013 said that it didn’t meet their expectations. Often, companies fall prey to one of several tendencies, such as availability or stability bias, that hinder the exercise and produce unusable results. Energy companies are finding that in today’s volatile world, one flaw of scenario planning is particularly acute: when business leaders consider a range of scenarios, they tend to “chop the tails off the distribution” and zero in on those that most resemble their current experience. Consider the shocks and disruptions of recent years. Control and eradication of foot-and-mouth disease.

Create huge 3D Mind Maps and Concept Maps with InfoRapid KnowledgeBase Builder (Freeware) On The Use Of Models To Assess Foot-And-Mouth Disease Transmission And Control. Foot-and-Mouth Disease — Fostering a New Preparedness Paradigm. FMD in U.K. 11.36am call that started the crisis. The discovery of the disease set alarm bells ringing right to the top of the Ministry of Agriculture in London's Smith Square. 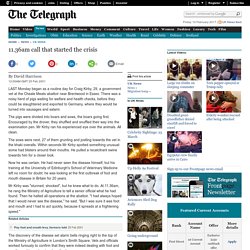 Vets and officials worked furiously to confirm that they were indeed dealing with foot and mouth - and to work out a plan of action. The official announcement was made on Wednesday and a quarantine ban imposed on two farms that had supplied livestock to the Essex abattoir: Greenway farm, in Great Horwood, Buckinghamshire, and Freshwater Bay, on the Isle of Wight. But the disease was already spreading and this weekend, with the ban on animal movements extended across Britain for seven days, the countryside is at a standstill. News of the outbreak was traumatic for farmers battered by a series of disasters in recent years.

Foot and mouth brought back nightmarish memories of a devastating outbreak in 1967 and another less serious one in 1981. Even postmen are considered a risk: they have been ordered to drop mail at farm gates rather than deliver it to the door. How the foot and mouth disaster of 2001 began. But Mr Blair's other choices are, in fact, even more revealing. 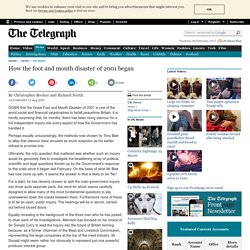 The brief handed to the Royal Society, under the chairmanship of Sir Brian Follett, is suspiciously general: to look into the future handling of animal diseases across the board. This avoids any particular focus on the highly controversial scientific aspects of how this particular epidemic has been tackled. Fellowship of the Royal Society (FRS) links several of the scientists who have played a central role in the story of the past few months. Foot and Mouth Disease in the UK – My Experience. Dr. 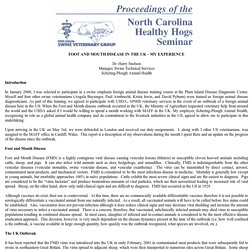 Harry Snelson Manager, Swine Technical Services Schering-Plough Animal Health Upon arriving in the UK on May 3rd, we were debriefed in London and received our duty assignments. A hybrid modeling approach to simulating foot-and-mouth disease outbreaks in Australian livestock. Introduction An outbreak of foot-and-mouth disease (FMD) in Australia would have a major economic and social impact. 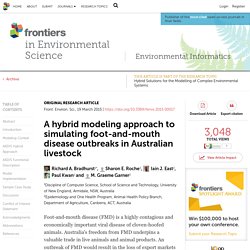 This includes disruption of the domestic market for livestock and products, loss of access to international markets, severe production and income losses in livestock and related industries, and the financial, political and social pressures of eradicating the disease (Carpenter et al., 2011; Matthews, 2011; Rushton et al., 2012). The present value of total direct economic losses from an outbreak of FMD in Australia are estimated at $5.6 to $52.2 billion AUD over 10 years, depending on the size of the outbreak and the effectiveness of control (Buetre et al., 2013).

Disease managers are faced with a number of challenges when responding to incursions of serious disease such as FMD. An individual-based model is formulated from the bottom-up and aggregates individual-level behavior to reveal population-level dynamics. Modeling Context. On The Use Of Models To Assess Foot-And-Mouth Disease Transmission And Control 309485.

A High Explanatory Model of Foot and Mouth Disease Spread in Central California a579587. Description of an epidemic simulation model for use in evaluating strategies to control an outbreak of FMD ajvr_64_2_195. Models of foot-and-mouth disease. Validation of population-based disease simulation models: a review of concepts and methods. Conceptual model. A Comparison between Two Simulation Models for Spread of Foot-and-Mouth Disease. Chronic Disease Modeling and Simulation Software. Mathematical modelling of infectious disease. Mathematical models can project how infectious diseases progress to show the likely outcome of an epidemic and help inform public health interventions. Models use some basic assumptions and mathematics to find parameters for various infectious diseases and use those parameters to calculate the effects of possible interventions, like mass vaccination programmes.

History[edit] Concepts[edit] R0, the basic reproduction number The average number of other individuals each infected individual will infect in a population that has no immunity to the disease. NetLogo Tutorial Modeling Epidemic Sread. Simulator. The GLEAM Simulator system consists of the GLEAM Server and the GLEAMviz Client application. The GLEAM Server uses GLEAM as the engine to perform the simulations. This server runs on high-performance computers managed by the GLEAM project.