Another Win for the Koch Brothers: Underfunded Public Schools. American public schools still receive less annual per-student funding from state budgets than they did before the onset of the Great Recession, a significant lag with worrisome consequences for a system already facing performance pressure from political and policy leaders, according to a new report by the Center on Budget and Policy Priorities. 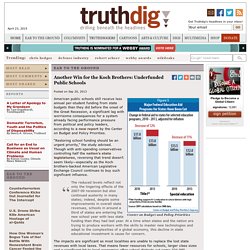 “Restoring school funding should be an urgent priority,” the study advised. Though with anti-spending conservatives controlling half the nation’s state legislatures, reversing that trend doesn’t seem likely—especially as the Koch brothers-backed American Legislative Exchange Council continues to buy such significant influence.

The Stealth Inequities of School Funding. SOURCE: AP/ Pat Sullivan Eliminating school finance disparities must be a priority if our goal is to successfully educate this generation of children to compete and win in the global marketplace. 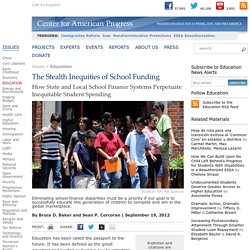 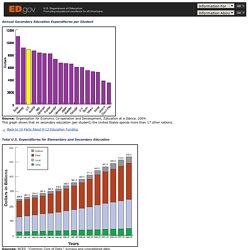 This graph shows that on secondary education (per student) the United States spends more than 17 other nations. Back to 10 Facts About K-12 Education Funding Total U.S. Most States Funding Schools Less Than Before the Recession. A more recent version of this report is available here. 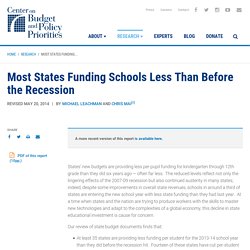 States’ new budgets are providing less per-pupil funding for kindergarten through 12th grade than they did six years ago — often far less. The reduced levels reflect not only the lingering effects of the 2007-09 recession but also continued austerity in many states; indeed, despite some improvements in overall state revenues, schools in around a third of states are entering the new school year with less state funding than they had last year. At a time when states and the nation are trying to produce workers with the skills to master new technologies and adapt to the complexities of a global economy, this decline in state educational investment is cause for concern.

Our review of state budget documents finds that: At least 35 states are providing less funding per student for the 2013-14 school year than they did before the recession hit. EMHS - segregation 8a. This wiki was done by: Priscilla A. 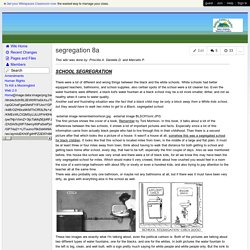 Danielle D. and Marcello P. There were a lot of different and wrong things between the black and the white schools. White schools had better equipped teachers, bathrooms, and school supplies; also certian spots of the school were a lot cleaner too. Even the water fountains were different, a black kid's water fountain at a black school may be a lot more smaller, dirtier, and not as healthy when it came to water quality.Another sad and frustrating situation was the fact that a black child may be only a block away from a White kids school, but they would have to walk two miles to get to a Black, segregated school. The first picture shows the cover of a book, Remember by Toni Morrison. 21st Century Segregation. De facto segregation threatens Montgomery public schools. By Dan Reed • June 26, 2013 Montgomery County Public Schools are often regarded as one of the best school systems in the nation, with schools routinely topping regional and national rankings. 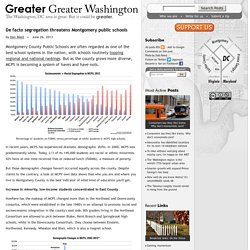 But as the county grows more diverse, MCPS is becoming a system of haves and have-nots. Percentage of students on FARMS versus percentage of white students in MCPS high schools. In recent years, MCPS has experienced dramatic demographic shifts. In 2000, MCPS was predominantly white. But those demographic changes haven't occurred equally across the county. Increase in minority, low-income students concentrated in East County Graph of changes in white and FARMS student population at each school. Educational Leadership:Faces of Poverty:Why Our Schools Are Segregated. However, residential segregation is actually the result of racially motivated law, public policy, and government-sponsored discrimination. 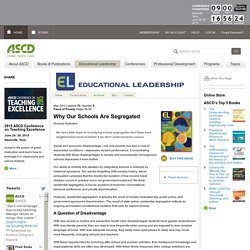 The result of state action, residential segregation reflects an ongoing and blatant constitutional violation that calls for explicit remedy. A Question of Disadvantage With less access to routine and preventive health care, disadvantaged students have greater absenteeism. With less literate parents, they are read to less frequently when young and are exposed to less complex language at home. With less adequate housing, they rarely have quiet places to study and may move more frequently, changing schools and teachers. Still apart: Map shows states with most-segregated schools. Segregation is still widespread at American public schools, 60 years after the landmark Brown v. 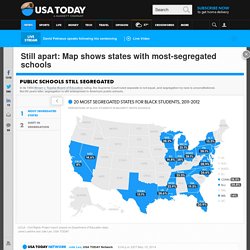 Topeka Board of Education ruling, a new report shows. And it no longer impacts just black and white students. Black and Latino students are more likely to attend schools with mostly poor students, while white and Asian students are more likely to attend middle-class schools, according to a report released Thursday by the Civil Rights Project at UCLA. A country divided: Stunning photographs capture the lives of ordinary Americans during segregation in the Jim Crow south.

How Income Segregation Broke the Middle Class : Workers & Economic Inequality : Our Work. American society is more divided today than in any other year since the Great Depression, with massive concentrations of wealth and income in the hands of an elite few. 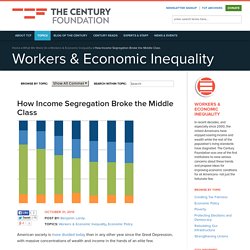 Such extreme inequality should push Americans toward a more redistributive politics. The U.S. Cities With the Highest Levels of Income Segregation. This is the first post in a five-part series examining economic segregation in U.S. metros. 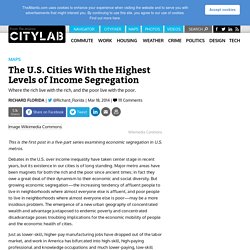 Debates in the U.S. over income inequality have taken center stage in recent years, but its existence in our cities is of long standing. Major metro areas have been magnets for both the rich and the poor since ancient times; in fact they owe a great deal of their dynamism to their economic and social diversity. But growing economic segregation—the increasing tendency of affluent people to live in neighborhoods where almost everyone else is affluent, and poor people to live in neighborhoods where almost everyone else is poor—may be a more insidious problem. The emergence of a new urban geography of concentrated wealth and advantage juxtaposed to endemic poverty and concentrated disadvantage poses troubling implications for the economic mobility of people and the economic health of cities.

High School Socioeconomic Segregation and Student Attainment. Kahlenberg.pdf. On US Education: It’s the Socioeconomic Segregation, Stupid. In a piece for The Nation last week, Linda Darling-Hammond demolished most of the remaining chunks of any size within the crumbling structure of corporate education’'s most ironically-titled reform ever --No Child Left Behind. NCLB is now rubble, even though many unseen victims continue to be buried beneath its mammoth pile. Darling-Hammond, who was recruited to get Team Obama up to speed on education issues following the 2008 election, entitled her piece, "Why Is Congress Redlining Our Schools? ".

Modern-Day Segregation in Public Schools. The Department of Education has branded "tracking"—designating students for separate educational paths based on their academic performance—as a modern day form of segregation. A U.S. Department of Education press release last month had a disorienting, retro ring to it: “Black students to be afforded equal access to advanced, higher-level learning opportunities,” the announcement proclaimed—six decades after the country’s Supreme Court determined that segregation in public schools was unconstitutional in the landmark ruling known as Brown vs.

Board of Education. A Return to School Segregation in America? Fifty years ago today, President Lyndon Johnson signed the Civil Rights Act, a landmark piece of legislation that guaranteed all Americans equal protection under the law. That meant that the nation’s public schools, still largely segregated despite a Supreme Court order banning the practice in 1954, would have to allow black children to attend school alongside white children. Under Johnson, the federal government began an aggressive push to integrate schools, threatening recalcitrant districts with federal funding cuts and lawsuits.

By 1988, the percentage of black children in white schools in the south had risen from zero to nearly 44 percent, according to a recent report by the UCLA Project on Civil Rights, the first major national evaluation of school segregation in decades. Brown v. Board of Education 60th anniversary: America’s schools are segregating again. Segregation Now.