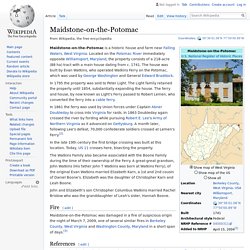 Located on the Potomac River immediately opposite Williamsport, Maryland, the property consists of a 218-acre (88 ha) tract with a main house dating from c. 1741. The house was built by Evan Watkins, who operated Watkins Ferry on the Potomac, which was used by George Washington and General Edward Braddock. In 1795 the property was sold to Peter Light. The Light family retained the property until 1854, substantially expanding the house. Colonial Roads of Hampshire County. The colonial "Great Wagon Road from Winchester to the South Branch" (at present Romney) eventually continued on to Wills Creek where Fort Cumberland was built. 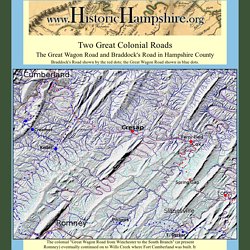 It comes from Winchester to Capon Bridge along Hollow Road from Gore arriving in Capon Bridge on Falls Road - not along current US Rt 50. It continues north to Edwards Run and on to North River Mills (T. Parker's on Fry & Jefferson). Then it goes near Kedron Road to Old Martinsburg Road and across to Barnes Mill ("Phipps" on the Fry and Jefferson Map) on the Little Cacapon. It then goes west (where no road presently exists up Shawan Run (earlier called "Old Wagon Road Run") and across country to the vicinity of the High School and "Mountain Top" where it crosses Rt 50.

Braddock's Road comes from north of Winchester entering Hampshire County at Whitacre and through Bloomery along Bloomery Run to the Cacapon River. Fort Ohio - Wikipedia. Fort Ohio (also known as the "New Store") was a stockade fort erected by Job Pearsall in 1749 on the present site of Ridgeley, West Virginia. 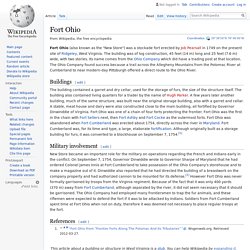 The building was of log construction, 45 feet (14 m) long and 25 feet (7.6 m) wide, with two stories. Backcountry Frontier of Colonial Virginia. The origins of backcountry distinctiveness are themselves traceable to deep and conflicting historic currents set powerfully in motion not only by the evident tensions between American Indians and Virginians over territorial claims, but also by the stress of imperial conflicts and anxieties over colonial security in a rapidly expanding slave society. 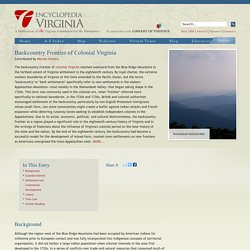 Simply put, the character and significance of the Virginia backcountry was the product of political and imperial conflicts embroiling the entire Atlantic world in the eighteenth century. In the historiography of American frontiers, their establishment and development has been attributed to the land hunger of European settlers yearning for the economic independence of property ownership. Joseph Neville, Sr. (1707 - 1792) - Genealogy. About Joseph Neville, Sr. 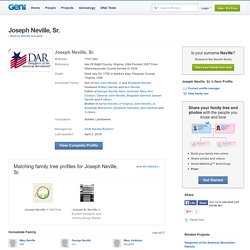 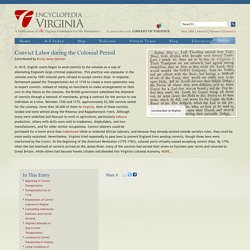 In Virginia as in Maryland, this labor demand at first was satisfied by indentured servants who came mostly from England, worked for a fixed number of years for those who paid their passage, and then became "free" planters themselves. Especially during the middle decades of the seventeenth century, crop failures in England and Wales prompted many to leave for the New World. Later, as economic and political conditions in the mother country improved, this source of workers began to dry up and be replaced with slave labor. Between about 1607 and 1699, approximately 96,600 indentured servants entered the colonies, along with about 33,200 slaves. Between 1700 and 1775 those numbers grew to approximately 103,600 indentured servants and an estimated 278,400 enslaved Africans. Conditions of Indentured Servants.

The treatment of indentured servants varied according to the master and location. 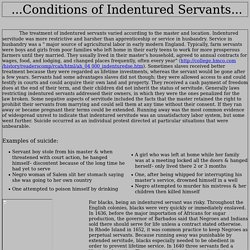 Indentured servitude was more restrictive and harsher than apprenticeship or service in husbandry. Service in husbandry was a " major source of agricultural labor in early modern England. Typically, farm servants were boys and girls from poor families who left home in their early teens to work for more prosperous farmers until they married. They usually lived in their master's household, agreed to annual contracts for wages, food, and lodging, and changed places frequently, often every year" ( 000_indenturedse.htm).

Sometimes slaves received better treatment because they were regarded as lifetime investments, whereas the servant would be gone after a few years. As for women, planter families often hired a white, female indentured servant to be a housekeeper. Old Fort Niagara’s Colonial Trading Post. As part of the research for the colonial historical novel I’m writing, I recently visited Old Fort Niagara near Youngstown, New York where the mouth of the Niagara River meets Lake Ontario. 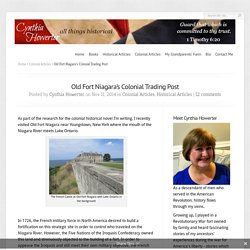 The French Castle at Old Fort Niagara with Lake Ontario in the background In 1726, the French military force in North America desired to build a fortification on this strategic site in order to control who traveled on the Niagara River. However, the Five Nations of the Iroquois Confederacy owned this land and strenuously objected to the building of a fort. In order to appease the Iroquois and still meet their own military objective, the French purposely built the main building of the fortification to look like nothing more than a large residence. They named it the “French Castle.” Gj7b.html. [202] BIOGRAPHICAL SKETCH OF COL. 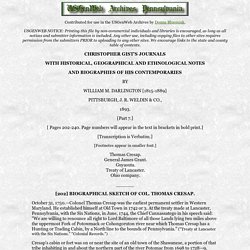 THOMAS CRESAP. October 31, 1750. —Colonel Thomas Cresap was the earliest permanent settler in Western Maryland. He established himself at Old Town in 1742 or 3. At the treaty made at Lancaster, Pennsylvania, with the Six Nations, in June, 1744, the Chief Cannassatego in his speech said: "We are willing to renounce all right to Lord Baltimore of all those Lands lying two miles above the uppermost Fork of Potowmack or Cohongoruton river near which Thomas Cresap has a Hunting or Trading Cabin, by a North line to the bounds of Pennsylvania.

" Nemacolin. Nemacolin (c. 1715–c.1767) was a hereditary chief of the Delaware Nation who helped Thomas Cresap widen an Native American path across the Allegheny Mountains to the Ohio River Valley. 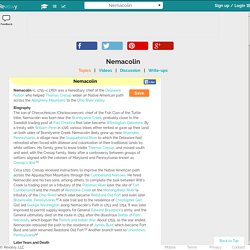 Biography Later Years and Death. Tanacharison - Wikipedia. Tanacharison or Tanaghrisson (c. 1700 – 4 October 1754) was a Native American leader who played a pivotal role in the beginning of the French and Indian War. He was known to European-Americans as the Half King, a title also used to describe several other historically important Native American leaders. His name has been spelled in a variety of ways. Early life[edit] Becoming a leader[edit] Tanacharison first appears in historical records in 1747, living in Logstown (near present Ambridge, Pennsylvania), a multi-ethnic village about 20 miles (30 kilometers) downstream from the forks of the Ohio River. Michael Cresap - Wikipedia. Captain Michael Cresap (April 17, 1742 – October 18, 1775) was a noted frontiersman born in Maryland.

Biography[edit] After Lord Dunmore's War, Cresap returned to Maryland and subsequently raised a company of riflemen for the Continental Army during the American Revolution. He died from illness in New York City while in the service of the army; he is interred there in Trinity Church Cemetery. Legacy[edit]   American Loyalists.