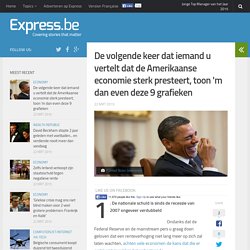 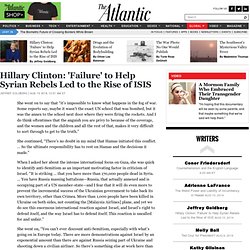 Some reports say, maybe it wasn’t the exact UN school that was bombed, but it was the annex to the school next door where they were firing the rockets. And I do think oftentimes that the anguish you are privy to because of the coverage, and the women and the children and all the rest of that, makes it very difficult to sort through to get to the truth.” She continued, “There’s no doubt in my mind that Hamas initiated this conflict. … So the ultimate responsibility has to rest on Hamas and the decisions it made.” When I asked her about the intense international focus on Gaza, she was quick to identify anti-Semitism as an important motivating factor in criticism of Israel. She went on, “You can’t ever discount anti-Semitism, especially with what’s going on in Europe today. She also struck a notably hard line on Iran’s nuclear demands. America's Overwhelming Contempt Toward Atheists and Muslims. July 17, 2014 | Religious tension is nothing new in America. 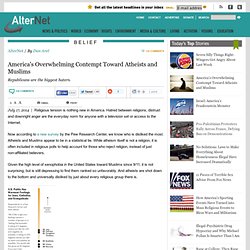 WATCH: Jon Stewart Takes Republicans To Task for Their Cruel Attitudes Toward Migrant Children. July 16, 2014 | Like this article? 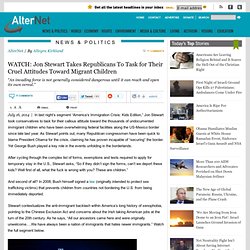 Join our email list: Stay up to date with the latest headlines via email. In last night’s segment “America’s Immigration Crisis: Kids Edition,” Jon Stewart took conservatives to task for their callous attitude toward the thousands of undocumented immigrant children who have been overwhelming federal facilities along the US-Mexico border since late last year. As Stewart points out, many Republican congressmen have been quick to blame President Obama for the crisis, claiming he has proven incapable of “securing” the border. Obama humiliates Muslims at Ramadan iftar. On Monday, President Barack Obama invited American Muslim leaders to an iftar (fast-breaking dinner) at the White House. 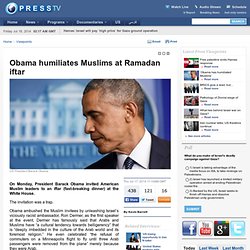 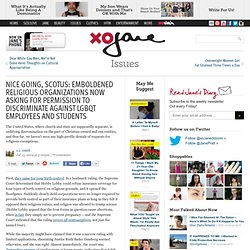 In a landmark ruling, the Supreme Court determined that Hobby Lobby could refuse insurance coverage for four types of birth control on religious grounds, and it opened the floodgates. Suddenly closely-held corporations were no longer required to provide birth control as part of their insurance plans as long as they felt it opposed their religious values, and religion was allowed to trump science (Hobby Lobby argued that the four forms in question cause abortions, when in fact they simply act to prevent pregnancy -- and the Supreme Court indicated that the ruling covers all contraceptives, not just the named four).

How we know the NSA had access to internal Google and Yahoo cloud data. The Washington Post reported last Wednesday that the National Security Agency has been tapping into the private links that connect Google and Yahoo data centers around the world. 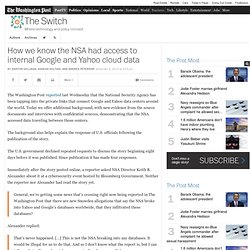 Today we offer additional background, with new evidence from the source documents and interviews with confidential sources, demonstrating that the NSA accessed data traveling between those centers. The background also helps explain the response of U.S. officials following the publication of the story. The U.S. government declined repeated requests to discuss the story beginning eight days before it was published. Since publication it has made four responses. Immediately after the story posted online, a reporter asked NSA Director Keith B. Noam Chomsky on the era of the drone. Ryan Firebee Noam Chomsky is the Institute Professor and Professor Emeritus in the Department of Linguistics and Philosophy at MIT. 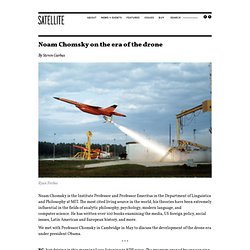 The most cited living source in the world, his theories have been extremely influential in the fields of analytic philosophy, psychology, modern language, and computer science. He has written over 100 books examining the media, US foreign policy, social issues, Latin American and European history, and more. We met with Professor Chomsky in Cambridge in May to discuss the development of the drone era under president Obama. 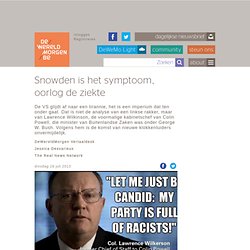 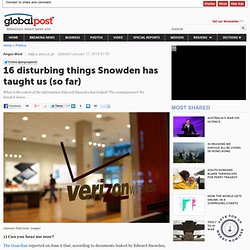 The Guardian reported on June 6 that, according to documents leaked by Edward Snowden, the Obama administration enabled the National Security Agency to collect caller information from Verizon through a “business records” provision of the Patriot Act, established under President George W. Bush. The government ordered Verizon to hand over call information on a daily basis, including the time, location and duration of calls. The Bush administration began collecting such information in October 2001 from AT&T, Verizon and BellSouth, which USA Today reported in 2006.