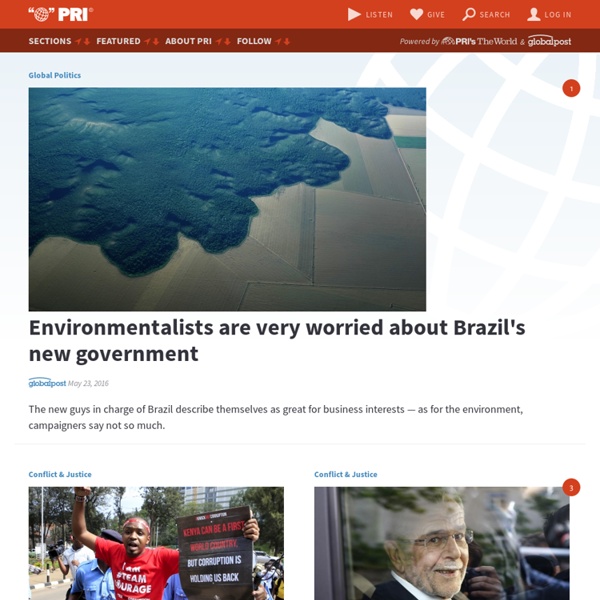 Deforestation Escalates in Brazilian Amazon Satellite imagery released earlier this week provided further evidence that deforestation in Brazil's Amazon region accelerated dramatically this year. Between August 2007 and July 2008, 8,147 square kilometers of the Brazilian Amazon were cleared, according to the country's National Institute for Space Research (INPE). This is an area more than twice the size of the U.S. state of Rhode Island. The expanse of deforested land is about 69 percent greater than last year, when 4,820 square kilometers were removed. "We're not content," Brazilian Environment Minister Carlos Minc told The Associated Press. "Deforestation has to fall more and the conditions for sustainable development have to improve."

Occupy’s next frontier: Foreclosed homes Occupy Wall Street is promising a “big day of action” Dec. 6 that will focus on the foreclosure crisis and protest “fraudulent lending practices,” “corrupt securitization,” and illegal evictions by banks. The day will mark the beginning of an Occupy Our Homes campaign that organizers hope will energize the movement as it moves indoors as well as bring the injustices of the economic crisis into sharp relief. Many of the details aren’t yet public, but protesters in 20 cities are expected to take part in the day of action next Tuesday. We’ve already seen eviction defenses at foreclosed properties around the country as well as takeovers of vacant properties for homeless families.

The bloody cost of Amazon deforestation José Cláudio Ribeiro da Silva had predicted his own murder six months before he was killed and received frequent death threats. Early in the morning on 24 May, in the northern Brazilian Amazon, José Cláudio Ribeiro da Silva and his wife Maria do Espírito Santo da Silva got on a motorcycle near the nature reserve they had worked on for over two decades. As the couple rode past the jungle they had dedicated their lives to protecting, gunmen hiding near a bridge opened fire, killing them both. Brazilian law enforcement officials said that the killing appeared to be the work of hired gunmen, due to the fact that an ear was cut off each of the victims. This is often done to prove to whoever paid for the killings that the job was carried out. The murder took place the same day the Brazilian congress passed a change to the forestry code that would allow agribusinesses and ranchers to clear even more land in the Amazon jungle.

'Occupy Our Homes' Campaign Brings Protests to Foreclosed Homes A subset of Occupy Wall Street protesters across the country are bringing their fight indoors with plans to stay in foreclosed homes for months. The group launched a national campaign on Tuesday called Occupy Our Homes -- literally living in the homes of foreclosed homeowners, giving temporary reprieve from the bitter cold. Nick Espinosa, one of the organizers of Occupy Minneapolis, which officially launched Oct. 7, said Minnesota's cold makes it difficult for people to spend the winter outdoors, where the temperature is forecasted to reach a low of two degrees on Thursday just as Hennepin County authorities removed unattended tarps and chairs at the plaza outside the Minneapolis government center, the Associated Press reported. The numbers at the plaza fluctuate, but they are "dwindling," Espinosa said.

Canada cuts environment spending The Canadian prime minister, Stephen Harper, has led cuts to green programmes. Photograph: Adrian Wyld/AP Canada's Stephen Harper government is spending more than 60 billion dollars on new military jets and warships while slashing more than 200 million dollars in funding for research and monitoring of the environment. Occupy Our Homes Faces Off With US Marshals in Washington Share Occupy Our Homes engaged in a dramatic faceoff this morning with US Marshals and local police in northeast Washington D.C., less than a mile from the US Capitol building. About thirty Occupiers arrived at the home of Dawn Butler around 8 am, in the 900 block of Maryland Ave NE, to block a looming eviction—and what followed left one Occupier and one US Marshal in the hospital.

S. Korea to Build World's Largest Offshore Wind Farm, Industry Clean Power Published on November 12th, 2011 | by Andrew Photo courtesy of Daewoo Shipbuilding & Marine Engineering; Recharge News “The Chief of Police Stepped On Me and Then He Charged Me With Rioting”: Activists Face Jail Time for Defending Homes Police Chief Dolan steps on protesters on his way into the Cruz home. (Peter Leeman)Photo Credit: Peter Leeman August 21, 2012 | Like this article?

The Future of Algae Fuels Is ... When? The Associated PressStrains of algae in the “strain room” at the algae-fuel maker Solazyme in California. A new study suggests that production of algae-based fuels won’t reach commercial scale anytime soon. As I write in Tuesday’s Times, a new study from the Rand Corporation, the global policy think tank based in Santa Monica, Calif., and formed more than 60 years ago to advise the American government on military issues, suggests that Department of Defense is wasting its time exploring alternative fuels. It raised particular questions about the near-term viability of algae-based fuels, which the study’s authors considered to be more or less laboratory-level stuff — and certainly not likely to scale up to any significant extent in the next 10 years. Given that the military has gone to great lengths to publicize its ongoing efforts to go green, and in particular, algae-green, the report did not sit well with with everyone.

Occupy our Homes Baltimore June 12, 2012|By Jessica Lewis, Alex Bennett and Saba Nazeer Those who rely on mainstream media to tell them what's happening can be forgiven for coming to the same opinion as ex-Gov. Robert L.