Trump Signs Executive Order Promoting Artificial Intelligence. President Trump signed an executive order Monday meant to spur the development and regulation of artificial intelligence, technology that many experts believe will define the future of everything from consumer products to health care to warfare. 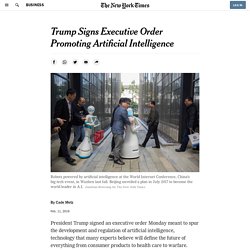 A.I. experts across industry, academia and government have long called on the Trump administration to make the development of artificial intelligence a major priority. Last spring, worried that the United States was not keeping pace with China and other countries, Jim Mattis, then the defense secretary, sent a memo to the White House imploring the president to create a national strategy on A.I. Now, Mr. Trump has taken that step, though this “American A.I. Initiative” might not be as bold as some had hoped.

The executive order aimed to better educate workers in the field, improve access to the cloud computing services and data needed to build A.I. systems, and promote cooperation with foreign powers. The future - Technological progress in China could still lead to fireworks. Technology QuarterlyJan 4th 2020 edition CHINA’S TECHNOLOGICAL rise, brought about by an authoritarian state actively guiding a market-oriented industrial base with access to global supply lines, is unlike anything in history. 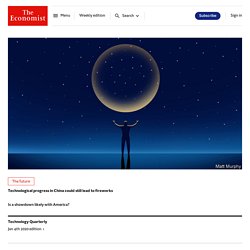 That does not necessarily make it unstoppable, or world-beating. But the possibility that it will provide a definitive edge in technologies vital to 21st-century success makes the West anxious. Enjoy more audio and podcasts on iOS or Android. Chinese technology - With the state’s help, Chinese technology is booming. FOR MOST of human history, China was the world’s most advanced technological power. 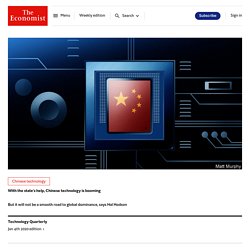 The blast furnace originated there, and thus so, too, did cast iron. Other breakthroughs included porcelain and paper. Chaguan - China’s ties with America could be tested by North Korea. Inside China's audacious global propaganda campaign. As they sifted through resumes, the team recruiting for the new London hub of China’s state-run broadcaster had an enviable problem: far, far too many candidates. 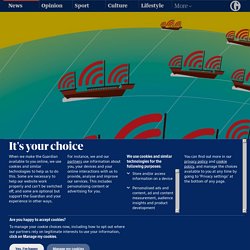 Almost 6,000 people were applying for just 90 jobs “reporting the news from a Chinese perspective”. Even the simple task of reading through the heap of applications would take almost two months. Huawei tested AI software that could recognize Uighur minorities and alert police, report says. Creative destruction - How America’s war on Huawei may boost Chinese technology. HUAWEI IS ON the ropes. 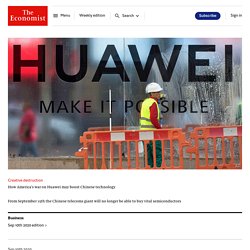 From midnight on September 14th the Chinese technology giant will be cut off from essential supplies of semiconductors. Without chips it cannot make the smartphones or mobile-network gear on which its business depends. America’s latest rules, finalised on August 17th, prohibit companies worldwide from selling chips to Huawei if they have been made with American chipmaking kit. American semiconductor companies, for which Huawei has been a lucrative customer, have implored their government to extend the deadline, as have their industry bodies. A full reprieve looks unlikely. Inside China's audacious global propaganda campaign. Why has China become such a big political issue? Formulating a strategy to deal with China will be an unavoidable responsibility of the next presidential administration, no matter who wins the election. 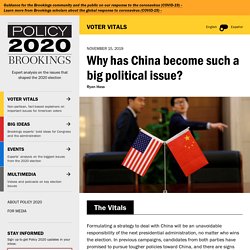 In previous campaigns, candidates from both parties have promised to pursue tougher policies toward China, and there are signs that aggressive approaches have bipartisan support in Congress, but the level of public support for an adversarial relationship casts doubt on the likelihood that strategies for responding to China’s rise will become a major issue in the 2020 election. The disillusionment within the American business community has arguably had the most impact on the politics of China in the United States. While the Trump administration has cast the US-China relationship as a multi-domain strategic competition, the president himself has been more narrowly focused on resetting trade relations and improving the trade balance.

China has grown from an underdeveloped country into America’s foremost economic competitor. Avoiding war: Containment, competition, and cooperation in U.S.-China relations. The most pivotal question in geopolitical affairs is whether and how the United States will exercise its military power to impose costs on China for seeking to assert military dominance in East and Southeast Asia. 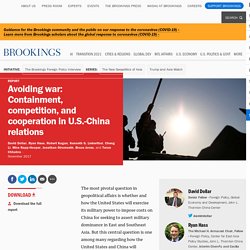 But this central question is one among many regarding how the United States and China will navigate each other’s changing roles in international affairs, particularly as Chinese President Xi Jinping gives greater expression to China’s ambitions to be a premier global power. On November 1, 2017, Brookings Vice President and Director of Foreign Policy Bruce Jones convened seven Brookings scholars and affiliates—David Dollar, Ryan Hass, Robert Kagan, Cheng Li, Kenneth Lieberthal, Mira Rapp-Hooper, and Jonathan Stromseth—to discuss the future of U.S. -China relations. The edited transcript below reflects their assessments of China’s current and future posture, and the American debate about how to respond. Assessing U.S.-China relations under the Obama administration. In weighing the state of U.S. 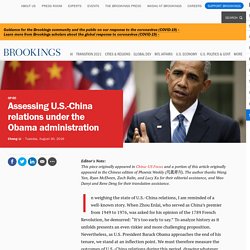 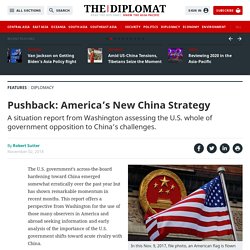 This report offers a perspective from Washington for the use of those many observers in America and abroad seeking information and early analysis of the importance of the U.S. government shifts toward acute rivalry with China. U.S. Timeline: U.S. Relations With China 1949–2020. Trump's Trade War (full film) The changing geopolitics of energy - America’s domination of oil and gas will not cow China. For more coverage of climate change, register for The Climate Issue, our fortnightly newsletter, or visit our climate-change hub “THE UNITED STATES OF AMERICA is now the number-one energy superpower anywhere in the world,” President Donald Trump told oilmen in Midland, Texas this summer, from a stage decorated with gleaming black barrels. 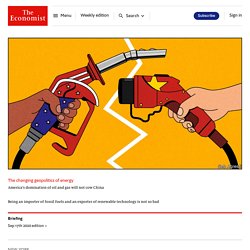 The sheer volume of hydrocarbons that such American oilmen have released from the shale beneath Midland and previously unforthcoming geology elsewhere gives substance to his boast (see chart 1). Over the past decade America’s oil output has more than doubled and its gas production increased by over 50%. America is now the world’s top producer of both fuels.

IN JANUARY 2019, when a Chinese spacecraft called Chang’e 4 visited the Moon, the mission broke new ground, figuratively speaking, by landing on the far side of that orb, which is perpetually invisible from Earth and thus also out of direct radio contact. This meant communications had to be relayed by a satellite which had been cunningly located for the purpose at a place where the interaction of the gravitational fields of Earth and Moon meant it could orbit a point in empty space. Compte-rendu et replay du webinaire : Etats-Unis, Chine, Europe : quelle remondialisation ? - Fondation Prospective et Innovation. Guerre commerciale entre les États-Unis et la Chine : quelles conséquences ? Depuis janvier 2018, nous assistons à une guerre commerciale d’ampleur croissante entre la Chine et les États-Unis, qui ne peut laisser l’économie mondiale indemne.

Trump's Trade War (full film) Great white hulls - A new law would unshackle China’s coastguard, far from its coast. THE ZHAOTOU-CLASS cutter may be a lowly coastguard ship. But it is no pushover. How Xi Jinping Blew It. Read: Joe Biden won’t fix America’s relationships Often, Chinese diplomats and state media hurl insults and threats at their critics. In August, when a Czech politician led a delegation to Taiwan, which Beijing still claims as a runaway province, Chinese Foreign Minister Wang Yi warned that his government “will make him pay a heavy price for his short-sighted behavior and political opportunism,” a threat that received a sharp rebuke from the Czechs, and even a protest from usually mild-mannered Germany.

A new foreign-policy team - Joe Biden will embrace allies—and enlist them to take on China. AS SOON AS Joe Biden takes over as president in January there will be a new tone in America’s foreign policy, and this week he is revealing the new team that will help set it. Its top trio, to be formally announced on November 24th, say a lot about the contrast he wishes to establish with the tumultuous President Donald Trump. His picks are predictable, solid and wedded to a belief in the rules-based international order. His nominee for secretary of state is expected to be Antony Blinken, who served as deputy secretary of state for the last two years of Barack Obama’s presidency. Choice page. Xinjiang and the world - The persecution of the Uyghurs is a crime against humanity. THE FIRST stories from Xinjiang were hard to believe. Surely the Chinese government was not running a gulag for Muslims? Surely Uyghurs were not being branded “extremists” and locked up simply for praying in public or growing long beards?

Beijing's bid for global power in the age of Trump, by Alfred W. McCoy (Le Monde diplomatique - English edition, August 2018) As the second year of Donald Trump’s presidency and sixth of Xi Jinping’s draws to a close, the world seems to be witnessing one of those epochal clashes that can change the contours of global power. Just as conflicts between American President Woodrow Wilson and British Prime Minister Lloyd George produced a failed peace after World War I, competition between Soviet dictator Joseph Stalin and American President Harry Truman sparked the Cold War, and the rivalry between Soviet leader Nikita Khrushchev and President John F. Kennedy brought the world to the brink of nuclear war, so the empowered presidents of the United States and China are now pursuing bold, intensely personal visions of new global orders that could potentially reshape the trajectory of the twenty-first century — or bring it all down.

Curbing China's rise, by Philip S Golub (Le Monde diplomatique - English edition, October 2019) Donald Trump outlined his intentions for international trade on 26 June 2016, when he sharply criticised US ‘politicians [who] have aggressively pursued a policy of globalization [that moved] our jobs, our wealth and our factories overseas’, leading to deindustrialisation and the destruction of the US middle class.