Resilient America. Lauren Alexander Augustine, director of the Resilient America Roundtable, spoke at an event on Monday, August 24, 2015 hosted by The Atlantic in New Orleans to mark the tenth anniversary of Hurricane Katrina. 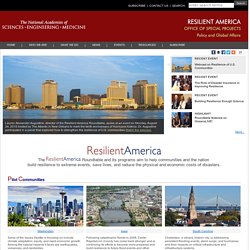 Dr. Augustine participated in a panel that explored how to strengthen the resilience of U.S. communities Watch the webcast. On June 23, 2015, Dr. Kathryn D. Sullivan (NOAA), The Honorable Samuel Adams (World Resources Institute), and Dr. Seattle - Pilot Project. Recent Disasters: Earthquake of 1965 Earthquakes are considered the most serious hazard that Seattle has and will continue to face in the future. 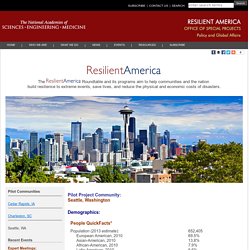 An earthquake with a magnitude of 6.5 occurred in April 1965. The effects were registered at 7 (Very Strong) to 8 (Destructive) on the Modified Mercalli Intensity (MMI) Scale. Six people were killed, mostly by falling debris. Seattle’s topography features many steep hills, and due to its regional climate – which includes very wet winters, the city is prone to landslides. Volcanoes The 1980 eruption of Mt.

Transportation Research Board (TRB) | National Academies. Puget Sound Regional Council (PSRC) WA State DOT (WSDOT) Seattle 2035. Creating Smarter Cities. Over the past six years, this Administration has pursued a place-based approach to working with communities as they tackle a wide range of challenges such as investing in infrastructure and creating jobs. 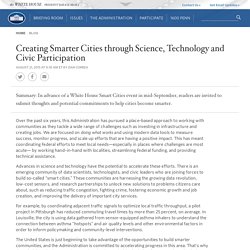 We are focused on doing what works and using modern data tools to measure success, monitor progress, and scale up efforts that are having a positive impact. This has meant coordinating Federal efforts to meet local needs—especially in places where challenges are most acute— by working hand–in-hand with localities, streamlining Federal funding, and providing technical assistance. Advances in science and technology have the potential to accelerate these efforts. There is an emerging community of data scientists, technologists, and civic leaders who are joining forces to build so-called “smart cities.” The United States is just beginning to take advantage of the opportunities to build smarter communities, and the Administration is committed to accelerating progress in this area. Hazard Identification & Vulnerability Analysis. Hazard Mitigation Planning Resources. Follow FEMA: Start of content. 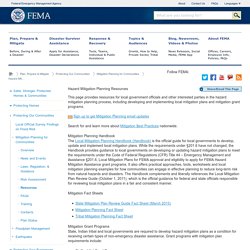 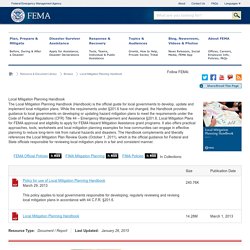 +Share/Email This Page. Best Practices in Local Mitigation Planning. Floods close I-5 for up to 3 days. Flooding on Interstate 5 has forced the state to close the freeway to all traffic from Grand Mound, south of Olympia, to Chehalis. 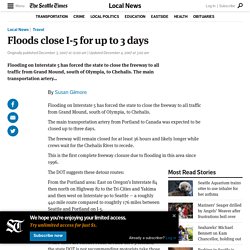 The main transportation artery... Flooding on Interstate 5 has forced the state to close the freeway to all traffic from Grand Mound, south of Olympia, to Chehalis. The main transportation artery from Portland to Canada was expected to be closed up to three days. The freeway will remain closed for at least 36 hours and likely longer while crews wait for the Chehalis River to recede. This is the first complete freeway closure due to flooding in this area since 1996.

The DOT suggests these detour routes: From the Portland area: East on Oregon’s Interstate 84 then north on Highway 82 to the Tri-Cities and Yakima and then west on Interstate 90 to Seattle — a roughly 440 mile route compared to roughtly 176 miles between Seattle and Portland on I-5. While there are surface roads around the I-5 closure, the state DOT is not recommending motorists take those routes.