Frank Merriwell at Yale by Burt L. Standish. Part 1 out of 6 Produced by Steven desJardins and Distributed Proofreaders [Illustration: "He finally found himself slugged under the ear and sentflying over a chair. 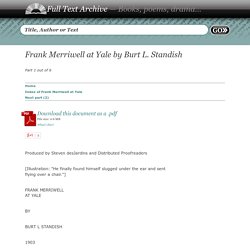 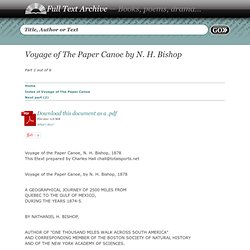 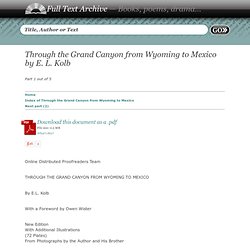 Kolb With a Foreword by Owen Wister New EditionWith Additional Illustrations(72 Plates)From Photographs by the Author and His Brother Dedication It is a dogged courage of which the author of this book is the serenepossessor--shared equally by his daring brother; and evidence of thisbravery is made plain throughout the following pages. Eight Hundred Leagues on the Amazon by Jules Verne. Part 1 out of 6 This etext was produced by Norman Wolcott. 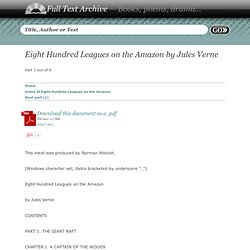 The Exploring Expedition to the Rocky Mountains, Oregon and California by Brevet Col. J.C. Fremont - Full Text Free Book (Part 1/9) Part 1 out of 9 Produced by Larry Mittell and PG Distributed Proofreaders No work has appeared from the American press within the past few yearsbetter calculated to interest the community at large than Colonel J.C.Fremont's Narrative of his Exploring Expedition to the Rocky Mountains,Oregon, and North California, undertaken by the orders of the UnitedStates government. 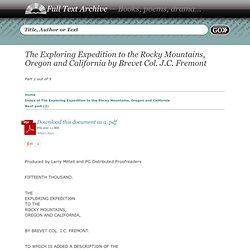 Eminently qualified for the task assigned him, Colonel Fremont enteredupon his duties with alacrity, and has embodied in the following pages theresults of his observations. The Young Engineers in Nevada by H. Irving Hancock. Part 1 out of 4 E-text prepared by Jim Ludwig or, Seeking Fortune on the Turn of a Pick By CHAPTERS I. 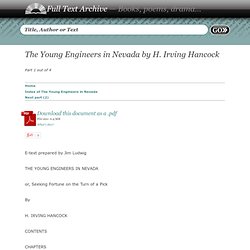 Alf and His "Makings of Manhood" II. Full text of "Reports of the Princeton University Expeditions to Patagonia, 1896-1899. J. B. Hatcher in charge" The Discovery of Yellowstone Park by Nathaniel Pitt Langford. Part 1 out of 3 Produced by Juliet Sutherland, Keren Vergon, Garrett Alley, DavidWidger and the Online Distributed Proofreading Team _Journal of the Washburn Expedition to the Yellowstone and FireholeRivers in the Year 1870_ by Nathaniel Pitt Langford Foreword (not included) 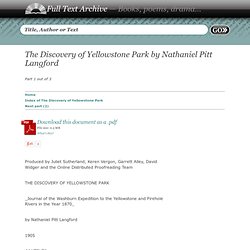 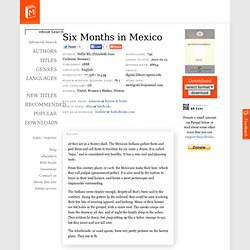 The Mexican Indians gather them and peel them and sell them to travelers for six cents a dozen. It is called "tuna," and is considered very healthy. It has a very cool and pleasing taste. From this century-plant, or cacti, the Mexicans make their beer, which they call pulque (pronounced polke). It is also used by the natives to fence in their mud houses, and forms a most picturesque and impassable surrounding. Cape Cod by Henry David Thoreau. Incidents of Travel in Yucatan, Vol. I. by John L. Stephens.

M of iron at the bottom; midway were miscellanies, among which were cotton, muskets, and two hundred barrels of turpentine; and on top, within reach of the hatches, were six hundred kegs of gunpowder. 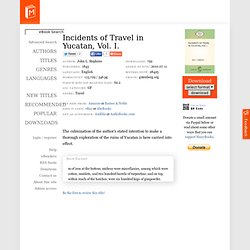 We had a valuable addition to our party in Dr. Cabot, of Boston, who accompanied us as an amateur, particularly as an ornithologist. Besides him, our only fellow-passenger was Mr. The Exploring Expedition to the Rocky Mountains, Oregon and California by J.C. Fremont. Rive him off. 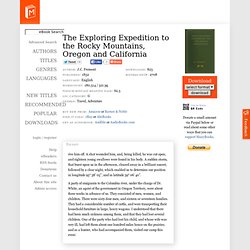 A shot wounded him, and, being killed, he was cut open, and eighteen young swallows were found in his body. A sudden storm, that burst upon us in the afternoon, cleared away in a brilliant sunset, followed by a clear night, which enabled us to determine our position in longitude 95° 38' 05", and in latitude 39° 06' 40". The Native Son by Inez Haynes Irwin. Was bored, I now bore. Ever since I first saw California, and became, inevitably, a Californiac, I have been talking about it, irritating and boring uncounted thousands. I begin placatingly enough, "Yes, I know you aren't going to believe this," I say. "Once I didn't believe it myself. I realize that it all sounds impossible. But after you've once been there - " Then I'm off. In another little volume devoted to the praise of California, Willie Britt is on record as saying that he'd rather be a busted lamp-post on Battery Street than the Waldorf-Astoria.

South Wind by Norman Douglas. Iling priest, soon outstripped both of them, in spite of a ten minutes' conversation on the quay with the pretty peasant girl of the steamer. He had engaged the fastest driver on the island, and was now tearing frantically up the road, determined to be the first to apprise the Duchess of the lunatic's arrival. The Duchess of San Martino, a kind-hearted and imposing lady of mature age who, under favourable atmospheric conditions (in winter-time, for instance, when the powder was not so likely to run down her face), might have passed, so far as profile was concerned, for a faded French beauty of bygone centuries--the Duchess was no exception to the rule. It was an old rule.

Nobody knew when it first came into vogue. Mr. The Adventures of the Chevalier De La Salle and His Companions by John S.C. Abbott. Introduce a brief account of his adventures. There is something in blood. The Marquette family had been illustrious in France from time immemorial. Generation after generation, many of its members had obtained renown, not only for chivalric courage, but for every virtue which can adorn humanity. Their ancestral home was a massive feudal castle on an eminence near the stately city of Leon. To Cuba and Back by Richard H. Dana. Ng the men, no Spanish hats, or Spanish cloaks, or bright jackets, or waistcoats, or open, slashed trousers, that are so picturesque in other Spanish countries. The men wear black dress coats, long pantaloons, black cravats, and many of them even submit, in this hot sun, to black French hats. The tyranny of systematic, scientific, capable, unpicturesque, unimaginative France, evidently rules over the realm of man's dress.

The houses, the vehicles, the vegetation, the animals, are picturesque; to the eye of taste "Every prospect pleases, and only man is vile. " The Bird-Woman of the Lewis and Clark Expedition by Katherine Chandler. The meat. They dried the skins to make blankets and houses. June won der ful draw pic ture spray write cache One June day Captain Lewis was walking ahead of the boats. He heard a great noise up the River. A Journey to America in 1834 by Robert Heywood. R Moselle per bottle 1.50 Brandy, Gin, Rum, or Whisky } per bottle 1 Punch, Cherry Brandy or Rum Cordial } Porter per bottle 0.37-1/2 Cider " .25 Soda Water " .12-1/4 Saratoga " .25.