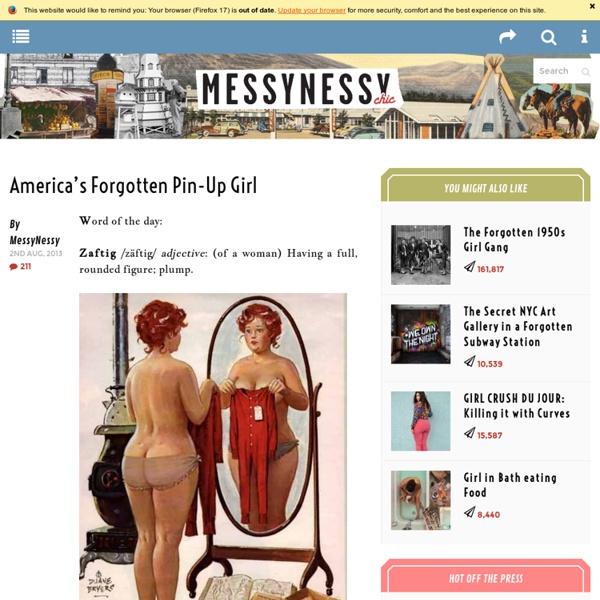 Word of the day: Zaftig /zäftig/ adjective: (of a woman) Having a full, rounded figure; plump. Meet Hilda, the creation of illustrator Duane Bryers and pin-up art’s best kept secret. Voluptuous in all the right places, a little clumsy but not at all shy about her figure, Hilda was one of the only atypical plus-sized pin-up queens to grace the pages of American calendars from the 1950s up until the early 1980s, and achieved moderate notoriety in the 1960s. “She’s a creation out of my head. Despite being one of history’s longest running calendar queens alongside the likes of Marilyn Monroe, even the most dedicated vintage enthusiasts probably won’t have come across Hilda before. “[Duane Bryers] had the chops to have been one of the greatest pin-up artists in America, but possibly his lust for ample-sized women prevented that,” admits the online gallery curator and Hilda collector, Les Toil. Of the moment he first discovered the lost Hilda watercolour illustrations, Les recalls: Related:  History of United States of America - in Depth - Continued

Photoshop? NO. These Are Real Animals Katerina Plotnikova did something extremely amazing! She used no photoshop! All poses and animals are real! 10 Freaking Creepy Japanese Urban Legends Japan, believe it or not, is a very, very dark and scary place… A lot of Japanese urban legends basically say this: Don’t ever freakin’ travel alone. They also have a fascination with the bathroom. Is it because we let loose in it? 1. Kuchisake-onna (Slit-mouthed woman) is a woman that walks around alone at night wearing a surgical mask. WRONG. This is from Wikipedia: The woman will stop the child and ask, “Am I pretty?” Honestly though, who lets their kid walk around at night? 2. According to some old story, a young schoolgirl was cut in half by an oncoming train after she had fallen in the tracks. There’s a version of this story that I heard a long time ago: There was this boy who was walking home alone, it was getting dark, and he was in an unfamiliar part of the town, so he started to pick up his pace. 3. If you’ve never been to a Japanese school bathroom or a Korean school bathroom, feel lucky. Aka Manto is a ghost that haunts the last stall in the bathroom. 4. 5. 6. Weird. 7. 8. 9.

101 Interesting Facts about the Civil War The Civil War was the bloodiest war ever fought on American soil. During an average day during the war, approximately 600 people were killed. By the end of the war, over 618,000 people had died. This is more Americans than WWI, WWII, the Korean War, and the Vietnam War combined.b If the names of the Civil War dead were organized similar to the names on the Vietnam Memorial wall, the Civil War memorial would be over 10 times longer.J During the Civil War, 2% of the U.S. population died. This is equivalent to 6 million men today. While rifles were the deadliest weapons during the war, disease killed more men. The Civil War is also known as "The Boy's War" The youngest soldier in the Civil War was a 9-year-old boy from Mississippi. Lincoln imposed the first federal income tax After the Southern states seceded, both the United States and the Confederacy instituted the first ever national income tax. Dr.

The Most Alien-Looking Place on Earth | awesome-elephant.com Socotra Island: you have to see it to believe it We covered some otherwordly places before, but this island simply blows away any notion about what is considered “normal” for a landscape on Earth. (images credit: Jan Vandorpe , socotra ) Imagine waking up on the Socotra Island and taking a good look around you (let’s say your buddies pulled a prank on you and delivered you there, and lets also assume that you don’t have any hangover from abuse of any substances). The second would be closer to the truth for this island, which is part of a group of 4 islands, has been geographically isolated from mainland Africa for the last 6 or 7 million years. (images credit: dianadrz , Irina Travina) (image credit: socotra ) The climate is harsh, hot and dry, and yet – the most amazing plant life thrives there. (image credit: Marco Pavan ) The name Socotra is derived from a Sanscrit name, meaning “The Island of Bliss”… Is it the beaches? Alien-looking plants: H. (image credit: Christian Besnier ) Dune?

The Marilyn Meme Originally posted at Shameless. Marilyn Monroe is often held up as the antidote to the idea that only thin can be beautiful. “Marilyn was a size 10/12/14,” goes a common refrain (though sizing basically means nothing these days, so what does that even prove?). There have been a couple Marilyn Monroe memes floating around Facebook in the past couple months, and both are troubling. The focus is on Marilyn’s curves, and how her swimsuit clad body is different from what movie stars look like today (oh, the tyranny of the “Best Beach Bodies!” In the first photo, Marilyn is compared to another woman in a bikini, who is much thinner. The second is the same photo of Marilyn, this time alone in the Motivational Poster style. I want very much for us to stop thinking that there is only one body type that is acceptable.

Disturbing (But Amazing) Pictures Expose The Absurdities Of Modern Culture *Warning: Graphic Images* One of my first thoughts after coming across these illustrations was, “How have I never seen this artist’s work before?”, because they are freaking amazing. Too few artists today have the courage to tackle important social commentaries with their art. But Spanish artist Luis Quiles has undoubtedly broken this mold with his series of illustrations that depict some relevant and unfortunate realities of our world today. Through his art, Quiles challenges a wide range of controversial issues ranging from over-the-counter drug addiction, censorship, and corruption, to sexism, violence, child abuse, and most pertinent of all, our cultural social-media-crazed obsession. There is something raw and hauntingly telling about the commentaries being expressed through each illustration, perhaps in part due to the apparent truth that exists in the messages. Take your time with this one to enjoy these fantastic pieces of art! The force-feeding of cheap food to the docile and lethargic public. Enough said.

22 Websites that are Beautiful and Useful Here at WDL, we like to keep you inspired by showing you beautifully designed websites every week with our web design inspirational lists. Today we decided to go a different route, and instead of picking a single “theme” of examples, we gathered examples of websites that are inspiring and useful for web designers. We gathered different tools and skill sharing websites to show you so you can be inspired and also discover a nice tool/service. From free lessons to learn how to code to monthly memberships to help you to learn more about design, in this post you will find here 22 examples of inspiring and useful websites. Make sure to visit all of them, enjoy! responsify Responsify is a browser based tool, which allows you to create your own responsive template. iconmonstr Free simple icons for your next project. Lore Instructors, extend your classroom online with discussions, gradebook, and more. Codeacademy Codecademy is the easiest way to learn how to code. Skillshare Pokki Work & Turn Symbolset