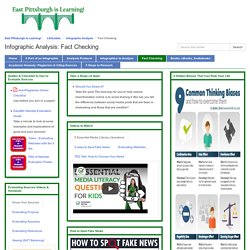 Lookfor these two simple criteria when hunting for the facts. Media Bias Fact Check strictly relies on signatories of the International Fact Checking Network (IFCN) for fact checking the sources we review. The IFCN sets a code of principles that must be followed in order to remain a part of the network. You can view their code of principles here. Politifact– is a fact-checking website that rates the accuracy of claims by elected officials and others who speak up in American politics. FactCheck.org– is a project of the Annenberg Public Policy Center of the University of Pennsylvania. Ad Fontes Media Provides a good illustration of ratings. AP Fact Check- is an IFCN fact checker from the Associated Press. AFP Fact Check– is an IFCN fact checker from Agence France-Presse (AFP) based in France. Historic Tale Construction Kit - Bayeux. The world's most misunderstood novel - BBC Culture. Evidence of an impending breakup may exist in everyday conversation – months before either partner realizes their relationship is tanking.

When doubts about a relationship start to creep in, people don’t just blurt them out. 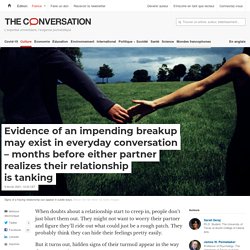 They might not want to worry their partner and figure they’ll ride out what could just be a rough patch. They probably think they can hide their feelings pretty easily. Film anvendt som tekst i emner i engelsk. The Language of film analysis. Advertising Archives - Vintage illustrations Adverts Posters Magazine Covers. BBC Learning English - Course: The Grammar Gameshow / Unit 1 / Session 12 / Activity 1. - The Washington Post. She Explains ‘Mansplaining’ With Help From 17th-Century Art. This story begins, as so many do these days, on Twitter. 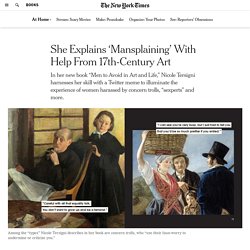 It's Rue's World — We're Just Living In It. Major spoilers for Euphoria season one up ahead. 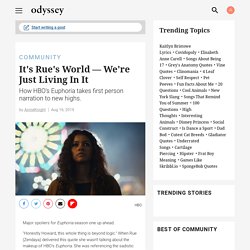 "Honestly Howard, this whole thing is beyond logic. " 11 of the Best Love Letters in Literature, Both Fictional and Not. Electric Lit relies on contributions from our readers to help make literature more exciting, relevant, and inclusive. 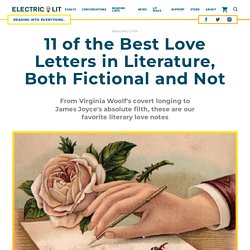 Seriously… - Mapping the Future - BBC Sounds. BBC Three - BBC Bitesize: Decolonising the curriculum. BBC News - Illegal coronavirus raves come with the very... Police still play a role in removing... - The Conversation. Mashable - If you’ve never heard of lawnmower parents,... Joan Didion: The Center Will Not Hold. A list of resources for supporting the Black Lives Matter movement. A week on from the brutal killing of George Floyd by white police officers in Minneapolis, it’s almost impossible for many of us to even comprehend the pain and anger that many in the Black community are feeling right now, both in the US and around the world. 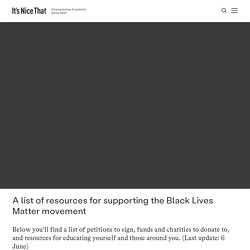 The fact that, for many, this doesn’t represent a watershed moment, but instead is something that’s dealt with on a daily basis, only serves to deepen the anguish. There’s nothing we can say that hasn’t already been said far more poignantly by countless others. So instead of rehearsing those thoughts and sentiments, we want to use our small corner of the internet to share resources; to amplify Black voices; and to support the demonstrations currently going on in any other ways we can.

Below you’ll find a list of links, divided up into charities, funds and initiatives to donate to; people and organisations to follow; books and articles to read; and petitions to sign. Charities and funds Black Lives Matter. Social Distance: a graphic short story for the coronavirus age by Mark Haddon. Yuval Noah Harari: the world after coronavirus. 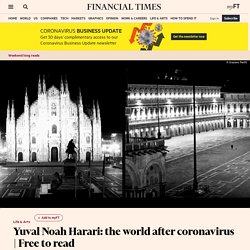 Perhaps the biggest crisis of our generation. The decisions people and governments take in the next few weeks will probably shape the world for years to come. They will shape not just our healthcare systems but also our economy, politics and culture. We must act quickly and decisively. Canterbury Tales is first major literary work developed as an app. A University of Saskatchewan-led international team has produced the first web and mobile phone app of Geoffrey Chaucer's The Canterbury Tales—the first major literary work augmented by new scholarship, in any language, presented in an app. 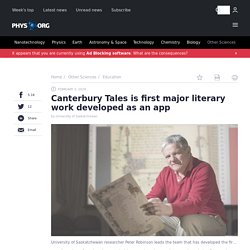 "We want the public, not just academics, to see the manuscript as Chaucer would have likely thought of it—as a performance that mixed drama and humor," said University of Saskatchewan (USask) English professor Peter Robinson, leader of the project. "We have become convinced, over many years, that the best way to read the Tales is to hear it performed—just as we imagine that Chaucer himself might have performed it at the court of Richard II. " The free app is the first edition in a planned series. The app features a 45-minute audio performance of the General Prologue of the Tales—the masterpiece work by the most important English writer before Shakespeare—along with the digitized original manuscript. This document is subject to copyright. Explainer: what is systemic racism and institutional racism? At the 2020 BAFTA awards, Joaquin Phoenix called out systemic racism in the film industry in his acceptance speech for leading actor. 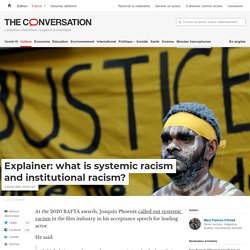 He said: I think that we send a very clear message to people of colour that you’re not welcome here. I think that’s the message that we’re sending to people that have contributed so much to our medium and our industry and in ways that we benefit from. […] I think it’s more than just having sets that are multicultural.

We have to do really the hard work to truly understand systemic racism. “Systemic racism”, or “institutional racism”, refers to how ideas of white superiority are captured in everyday thinking at a systems level: taking in the big picture of how society operates, rather than looking at one-on-one interactions. These systems can include laws and regulations, but also unquestioned social systems. Kvinder i tegneserier – Fra det totale fravær til #metoo og ikke-binære helte. Direct and Indirect Speech With Examples and Explanations. 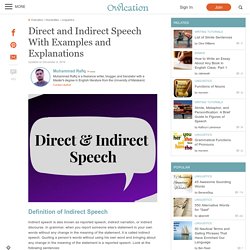 The Impeachment Process and President Trump - The Choices Program. Objectives Students will: Understand the Constitutional basis and historical precedents for impeachment.Develop media source analysis skills.Distinguish between opinion and fact.Consider evidence, bias, audience, and author expertise to assess source reliability.Compare and contrast opinions about the potential impeachment of President Trump. Note to Teachers In the current political climate, discussing the impeachment inquiry into President Trump is likely to elicit strong responses from students who hold differing opinions. Before you begin this lesson, you may want to review our resource guide, Teaching about Controversial Issues: A Resource Guide. We broke down the last decade of climate change in 7 charts.

As this hottest-on-record, godforsaken decade draws to a close, it’s clear that global warming is no longer a problem for future generations but one that’s already displacing communities, costing billions, and driving mass extinctions. And it’s worth asking: Where did the past 10 years get us? The seven charts below begin to hint at an answer to that question. 40 hilarious translation fails from different languages. – The Language Nerds. Translation is a hard-to-get skill that is not given to everyone. The fact that you speak two languages doesn’t make you a translator. If you haven’t taken any translation courses and attempt to translate, your translations will contain a lot of meaningless words such as “umm”, “err”, “that thing..you know”.

Sometimes, translations (mostly literal) turn into the funniest thing when they go horribly wrong. In this article, we compiled some of the funniest examples of translation gone wrong to make you appreciate the job translator are doing. Bushfires, bots and arson claims: Australia flung in the global disinformation spotlight. In the first week of 2020, hashtag #ArsonEmergency became the focal point of a new online narrative surrounding the bushfire crisis.

The message: the cause is arson, not climate change. Police and bushfire services (and some journalists) have contradicted this claim. We studied about 300 Twitter accounts driving the #ArsonEmergency hashtag to identify inauthentic behaviour. Patient Zero. September 19 The picture came! Emerald. West Africa's oral history griots tell a more complete story — Quartz Africa. The last few years have witnessed a growing recognition of oral histories in Western academies. With more authors, filmmakers and artists from around the world highlighting the rich oral histories of West Africa, the tradition of passing knowledge through generations has invited a moment of change within wider Western establishments. Oral histories are rich, complex tools of storytelling, which contain fine details of ancestry and ancestral experiences. 'Johnson unleashed': what the papers say about the Conservative election 'landslide'

Brexit-ordbogen: Fra Artikel 50 til toldunionen. Brexit-ordbogen: Fra Artikel 50 til toldunionen. Our election endorsement - Britain’s nightmare before Christmas. The Nature of Writing. Advice from a Passionate Currator of Commencement Addresses. What Aristotle and Joshua Bell can teach us about persuasion - Conor Neill. A local's guide to Copenhagen, Denmark. No-deal Brexit: 10 ways it could affect you. Image copyright Getty Images. Occasions. How Parliament works in nearly 60 seconds. Politics Unboringed - How does British democracy work?