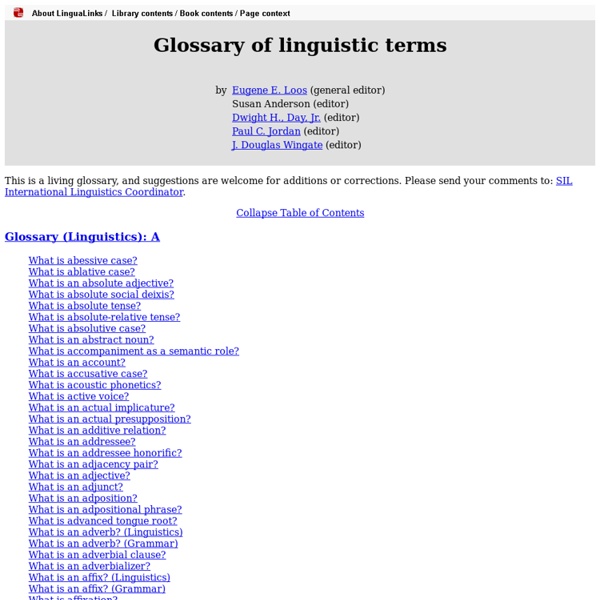 The Greek Alphabet Phonology and Orthography Oops! Twenty-four letters only? Surely some sounds must be missing? That’s correct. There are sounds common in other languages that do not exist in Greek. 100 Open Courses to Learn Any New Language Learning a new language can be a great way to challenge your mind, meet people from different cultures and even add a valuable asset to your resume and hireability. While traditional courses can be great, there are a number of free courses on the web that can help teach you the basics of language learning and get you on the path to fluency without having to spend a fortune. Here are 100 resources we’ve found that will help you become multilingual in your choice of languages. French French is one of the most widely spoken languages in the world and an official language in countries on nearly every continent. These courses will help you learn the famously romantic language for personal advancement or pleasure.

For Better for Verse accent: emphasis given a syllable in ordinary usage, as provided by a pronouncing dictionary. See also stress. accentual-syllabic: the prosodic mode that dominated English-language poetry 1400-1900, and that this tutorial exclusively addresses. Alike distinct from verse that is quantitative (measuring duration, as in classical Greek and Latin), accentual (counting only beats, as in Old English), and syllabic (counting only syllables, as in certain: 20th-cy. experiments), accentual-syllabic verse is based on recurrent units (feet) that combine slacks and stresses in fixed sequence.

Unusual Words Unusual Words A by no means exhaustive list of rare, obscure, strange and sometimes funny words and their meanings that only seem to crop up in crosswords and dictionaries. Words that are used so seldom, you wonder who invented them and why. Home ~ The Stories ~ Diversions ~ Links ~ Contact Language Page Languages are grouped together into families. Languages belonging to the same family share common ancestors. This essay looks at some of the more common and important language families. These are described in general terms with unusual or interesting grammars indicated for selected languages. There are descriptions of several language families in detail:

Linguistic Geography of the United States Traditionally, dialectologists have listed three dialect groups in the United States: Northern, Midland, and Southern--although some scholars prefer a two-way classification of simply Northern and Southern, and one may also find significant difference on the boundaries of each area. The map shown above represents a synthesis of various independent field studies this century. These are in chronological order: the Linguistic Atlas fieldwork begun under the direction of Hans Kurath in the 1930's; the informal but extensive personal observations of Charles Thomas in the 1940's; the DARE fieldwork of the 1960's under Frederic Cassidy; and the Phonological Atlas fieldwork of William Labov during the 1990's. Although it may seem that a great amount of data has been collected over a short time span, the shifts in American dialects this century have been rapid enough to outpace the data collection.

language pet peeves « brainsnorts inc >.< there are a few phrases that people are constantly saying that are just plain wrong, and apparently the people themselves just refuse to listen when i try to explain the errors. 1. “it was all downhill (or uphill) from there.” the reason people get this phrase wrong is because they are mixing up what it is referring to. people are under the false impression that this has to do with a growth chart or line graph, in which a line going “up” is a good thing, line going “down” is a bad thing. however, what it really refers to is riding a bicycle either “uphill” or “downhill.” on a growth chart, down is bad. but on a bicycle, down is good. so when we believe that things are progressing smoothly and easily, we are supposed to be saying that “it was all DOWNhill.” and when things are difficult, we should be saying that the conditions were “UPhill.” please get it right.

Words in English A Brief History of English, with Chronologyby Suzanne Kemmer © 2001-2005 Pre-English | Old English | Middle English | Modern English The language we call English was first brought to the north sea coasts of England in the 5th and 6th centuries A.D., by seafaring people from Denmark and the northwestern coasts of present-day Germany and the Netherlands. These immigrants spoke a cluster of related dialects falling within the Germanic branch of the Indo-European language family. Artificial Grammar Reveals Inborn Language Sense, JHU Study Shows « News from The Johns Hopkins University May 12, 2011 FOR IMMEDIATE RELEASE MEDIA CONTACT: Lisa De Nike 443-287-9960Lde@jhu.edu Parents know the unparalleled joy and wonder of hearing a beloved child’s first words turn quickly into whole sentences and then babbling paragraphs. But how human children acquire language-which is so complex and has so many variations-remains largely a mystery. Fifty years ago, linguist and philosopher Noam Chomsky proposed an answer: Humans are able to learn language so quickly because some knowledge of grammar is hardwired into our brains. In other words, we know some of the most fundamental things about human language unconsciously at birth, without ever being taught. Now, in a groundbreaking study, cognitive scientists at The Johns Hopkins University have confirmed a striking prediction of the controversial hypothesis that human beings are born with knowledge of certain syntactical rules that make learning human languages easier.