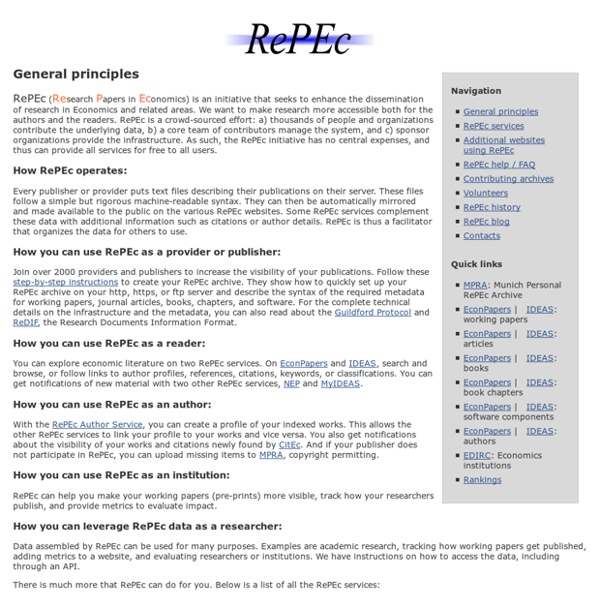 General principles RePEc (Research Papers in Economics) is a collaborative effort of hundreds of volunteers in 82 countries to enhance the dissemination of research in Economics and related sciences. The heart of the project is a decentralized bibliographic database of working papers, journal articles, books, books chapters and software components, all maintained by volunteers. The collected data is then used in various services as described below. So far, over 1,600 archives from 81 countries have contributed about 1.4 million research pieces from 1,800 journals and 3,800 working paper series. Over 35,000 authors have registered and 70,000 email subscriptions are served every week.

En Marche aiming to take out the EPP Guy Verhofstadt, the leader of the liberal ALDE group and Belgium’s former prime minister, took part in the launch of the Grand March for Europe in Brussels, whose aim is to listen to citizens but also to challenge traditional European political groups. EURACTIV.fr reports. “To listen without making judgements, in order to obtain as full a picture as possible and come up with proposals for the European elections,” Arthur Corbin, LREM (La République En Marche) organiser in Brussels said of the movement’s aims. Springer Open Choice You can decide to publish your article with open access during the MyPublication process. Once your article has been accepted for publication, you will receive an email from Springer with a link to your MyPublication pages. In these pages you can choose for your article to be published with open access. Publication fee

Service Catalog Deutsch Wissen öffnen Can I publish Open Access? Wissen sprießt Our resources – freshly licensed for you! Wissen ableiten Africa Governance Initiative This year AGI celebrates five years since starting in Sierra Leone and Rwanda. Today the organisation is working in 7 countries across Africa and continuing to grow. In April Tony Blair and AGI Director Andy Ratcliffe joined World Bank President Jim Kim, Michael Barber and others for a day of discussions on how governments can best deliver change for their people. BASE - Bielefeld Academic Search Engine BASE is one of the world's most voluminous search engines especially for academic open access web resources. BASE is operated by Bielefeld University Library. As the open access movement grows and prospers, more and more repository servers come into being which use the "Open Archives Initiative Protocol for Metadata Harvesting" (OAI-PMH) for providing their contents. BASE collects, normalises, and indexes these data. BASE provides more than 80 million documents from more than 4,000 sources. You can access the full texts of about 60-70% of the indexed documents.

Home In April 2018, over three days, 20 participants from EU Members States and candidate countries came together with Eurostat colleagues to learn about Open PM2 and how it is used in the ESS Vision 2020 projects. PM2 is the EU institutions’ project management methodology. Following the launch of its Open Edition in November 2016, it is now being translated into several languages and made available for free to interested parties. The three-day course, targeting budding project managers, just gave a taste of how working together can be improved by having a common understanding, a common vocabulary, a common methodology and common tools. What were the learning outcomes for the participants?