Kerry Reopens US Embassy in Havana: Pictures. U.S., Cuba re-establish diplomatic relations - CNNPolitics.com. Cuban Foreign Minister Bruno Rodriguez Parrilla was to travel to the Cuban Embassy in Washington to raise his country's flag, an event that Cuban government officials said would be broadcast live on the island's state-run TV. 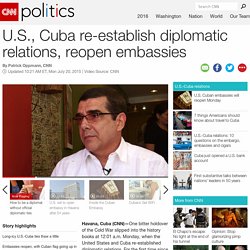 A Cuban delegation of diplomats, artists and veterans of the revolution were to commemorate the breakthrough with about 500 guests and more than likely down a few celebratory mojitos and shots of Havana Club rum. U.S. diplomats in Havana have readied everything from new business cards to the embassy sign. But the festivities and flag-raising will have to wait for Secretary of State John Kerry's visit -- the highest-level trip by a U.S. official to Cuba since the 1959 revolution -- for the embassy reopening ceremony in August. 7 things Americans should know about travel to Cuba The Cuban and American heads of their respective Interest Sections will became charges d'affaires until ambassadors are named.

Plenty of longtime enmity to overcome. Chattanooga shooting: 4 Marine killed in Tennessee. Mohammad Youssuf Abdulazeez was carrying 30-round magazines when he opened fire, according to a source briefed by law enforcement. 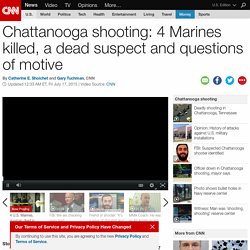 Abdulazeez kept police at bay for some time with the amount of ammunition he had, according to the source. The shooting suspect was armed with an AK-47 style weapon‎ at the time of the attack according to two law enforcement officials briefed on the investigation. [Previous story, posted at 10:30 p.m. ET Thursday] (CNN) -- Who was the gunman accused of killing four Marines in a shooting rampage Thursday at two military centers in Chattanooga, Tennessee, and why did he open fire? Suspected shooter Mohammad Youssuf Abdulazeez, 24, is dead, the FBI said.

Witnesses saw Abdulazeez spray a hail of bullets at the glass doors of a military recruiting center in a strip mall. Now, with the FBI in the lead, a terrorism task force is investigating, a law enforcement source said. A key detail will help them make that determination: finding out the suspect's motive.

Flag's removal doesn't erase racism, provide justice. He knows well the pain that helped prompt the flag's removal; after all, his spiritual home is the historic "Mother Emanuel" AME Church, where nine people were gunned down by a white racist last month. 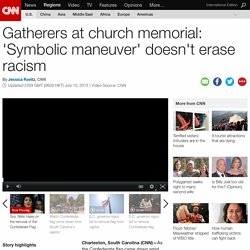 Their deaths and the gunman's glorification of the flag finally spurred its demise after decades of contentious debate. But ask him how significant this moment is, and he doesn't mince words. "It's great symbolically, but it shouldn't have been there in the first place," he says. "It doesn't mean a damn thing, really. " It's a ceremony to make politicians feel good, he says. "The problem in America is we fail to educate our children, all of them, white and black," he says. Around him, visitors flock to the memorial that's grown outside the church. A woman stands before the memorial, her closed eyes not stopping the tears that fall. "When it happened, it sounded like an impossible thing, a recounting of something out of a horror story," she says. 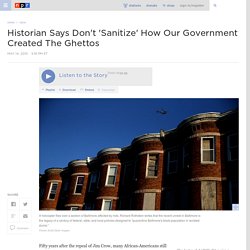 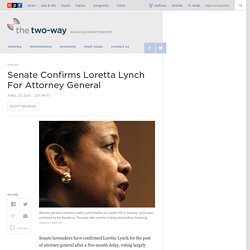 Lynch was confirmed by the Senate on Thursday after months of delay and partisan bickering. Jacquelyn Martin/AP hide caption itoggle caption Jacquelyn Martin/AP Senate lawmakers have confirmed Loretta Lynch for the post of attorney general after a five-month delay, voting largely along party lines, with Democrats in the chamber joined by 10 Republicans supporting her nomination. A simple majority is all that was required to confirm Lynch and the 56-43 vote means she will replace Eric Holder in the top post at the Justice Department.

In an unexpected twist, Senate Majority Leader Mitch McConnell, who had kept her nomination from a vote for so many weeks, voted with the majority. In February, the Senate Judiciary Committee sent her nomination to the full Senate, but Republican leaders delayed the vote for a variety of reasons. Update at 3:20 p.m.