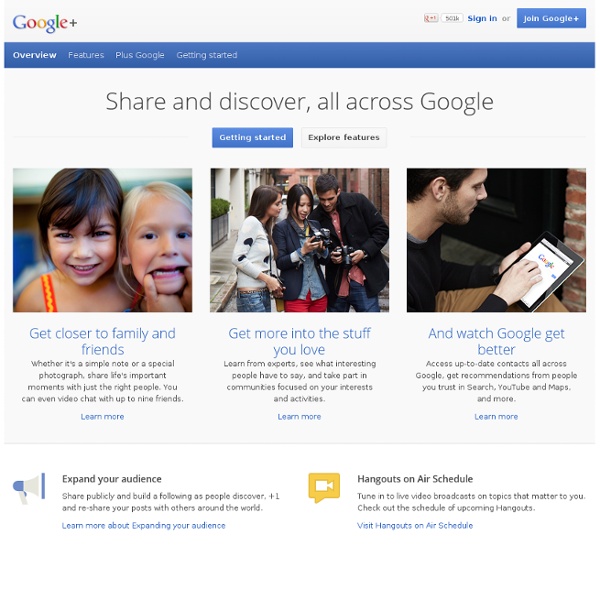 Make your own Google+ Feed Widget The awesome Google+ Widget Show off your Google+ public stream on your Blog or Website with our exclusive Widget! Make your own Google+ Feed Widget. The look and style of this sleek widget is fully customizable. Solutions de communication et de collaboration hébergées dans le cloud - Office 365 - Microsoft ProductsTemplatesSupport My accountSign in Collaborate with Office Online Save documents, spreadsheets, and presentations online, in OneDrive.

How Famous Companies Got Their Names? You see these big company names each and every day, but do you know what they actually mean? In order to help you fill this gap of knowledge, we made a visual list of famous company name etymologies. It is heavily based on this Wikipedia’s list, where you can also find the complete listing of companies and their name origins not mentioned in this post. So, scroll down the list and then tell us how many did you already know? Skype

How to Send RSS Feeds to Twitter and Facebook TwitterFeed is a service that enables you to send RSS feeds to your Twitter, Facebook and many other accounts. You can either use your own website or blog’s RSS feed.. or any other RSS feed.. or both for that matter! So any new content that you (or others) publish will automatically be pushed out to your Twitter or Facebook streams, via an RSS feed.

Mary Meeker: Economy Is Recovering, Mobile Is Exploding, And The Today at the Web 2.0 Summit in San Francisco, Morgan Stanley Managing Director, Mary Meeker, gave her usual quick presentation with a ton of information. Rather than trying to squeeze it all in (which not even she can in her 15 minute presentation), I will embed the slides below when they are up and hit on her major points. Overall, she notes that Morgan Stanley sees many good signs that the economy is recovering. She notes that stock markets usually are a leading indicator of recovery, and certainly we’ve been seeing that recovery in the tech sector (see: Apple). That’s good news because the tech industry is now the most highest capitalized market, it’s no longer the financial industry. Meeker thinks we’re in a new computing cycle with the mobile web.

Introducing the Google+ project: Real-life sharing, rethought for the web Update: For our international readers, this post is also available in French, German, Italian, Japanese, Portuguese, Russian and Spanish. - Ed. Among the most basic of human needs is the need to connect with others. With a smile, a laugh, a whisper or a cheer, we connect with others every single day. Today, the connections between people increasingly happen online. Yet the subtlety and substance of real-world interactions are lost in the rigidness of our online tools.

Yogile: Easy Group Photo Sharing These days we’re all photographers, whether via cell phone, point & shoot, a more serious DSLR or some other gadget with photo snapping capabilities. We’re a digitally social and sharing society these days, yet it’s still surprisingly difficult to share group photos outside social networks like Facebook. Yogile brings a simple and very usable solution to the table for easy photo sharing for groups. Google gave original Mac designer free rein on new Google+ UI By Josh Ong Google's new Google+ social networking project departs from the company's usually spartan interfaces with an animated UI designed by original Apple Macintosh team member Andy Hertzfeld.Update: Hertzfeld has written a Google+ post giving credit to his colleagues who also contributed to the service's user interface. While he admits to having "almost single-handedly" designed the Circles editor, he also notes that he wasn't responsible for the design of the entire product. "Now some people are saying that I'm responsible for the broad visual refresh now rolling out across Google, which couldn't be further from the truth - in fact, I'm not even sure I like it," he wrote. The search giant announced its Google+ endeavor on Tuesday. After the design of the service quickly drew praise, it was discovered that Hertzfeld played a significant role in developing it.

Nym Wars I hadn't been paying much attention to the Google "Real Names" clusterfuck, because it was so obvious to me that they were going to lose this one in the press that it would all be over soon. But it's still not over, and the Google brass appear to be digging in their heels, despite the universally bad press they're getting over it. And then the other night I had dinner with a friend which turned into an hour long argument over it, because he thought that forcing everyone to use their real names was just fine. This is someone I've known for decades, so to say that I was shocked and horrified by his attitude is an understatement. It was as if my friend had suddenly started beginning sentences with, "I'm not a racist, but..." EFF: A Case for Pseudonyms