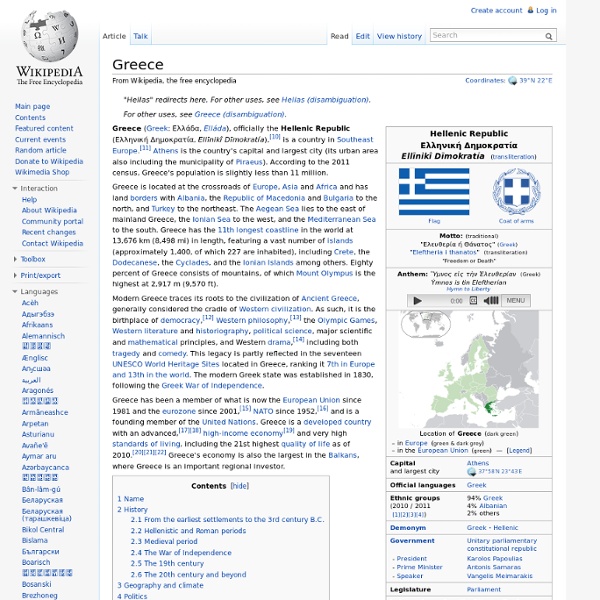 Greece (Greek: Ελλάδα, Elláda, pronounced [eˈlaða] ( )), officially the Hellenic Republic (Ελληνική Δημοκρατία [eliniˈci ðimokraˈti.a] Ellīnikī́ Dīmokratía)[11] and known since ancient times as Hellas (Greek: Ἑλλάς), is a country in Southern Europe.[12] According to the 2011 census, Greece's population is around 11 million. Athens is the nation's capital and largest city. Modern Greece traces its roots to the civilization of Mycenaean Greece and is considered the cradle of all Western civilization. As such, it is the birthplace of democracy,[16] Western philosophy,[17] the Olympic Games, Western literature and historiography, political science, major scientific and mathematical principles,[18] and Western drama,[19] including both tragedy and comedy. The cultural and technological achievements of Greece greatly influenced the world, with many aspects of Greek civilization being imparted to the East through Alexander the Great's campaigns, and to the West through the Roman Empire. History

LM4X LM2- LM4- Denmark Denmark ( i/ˈdɛnmɑrk/; Danish: Danmark)[N 10] is a Scandinavian country in Northern Europe. The southernmost of the Nordic countries, it is located southwest of Sweden and south of Norway, and bordered to the south by Germany. The Kingdom of Denmark[N 11] is a sovereign state that comprises Denmark and two autonomous constituent countries in the North Atlantic Ocean: the Faroe Islands and Greenland. Denmark proper has an area of 43,094 square kilometres (16,639 sq mi),[9] and a population of 5,659,715 (January 2015).[3] The country consists of a peninsula, Jutland, and the Danish archipelago of 443 named islands,[10] of which around 70 are inhabited. The islands are characterised by flat, arable land and sandy coasts, low elevation and a temperate climate. The Constitution of Denmark was signed on 5 June 1849, ending the absolute monarchy which had begun in 1660. Etymology[edit] History[edit] Prehistory[edit] Viking and Middle Ages[edit] Early modern history (1536–1849)[edit] Geography[edit]