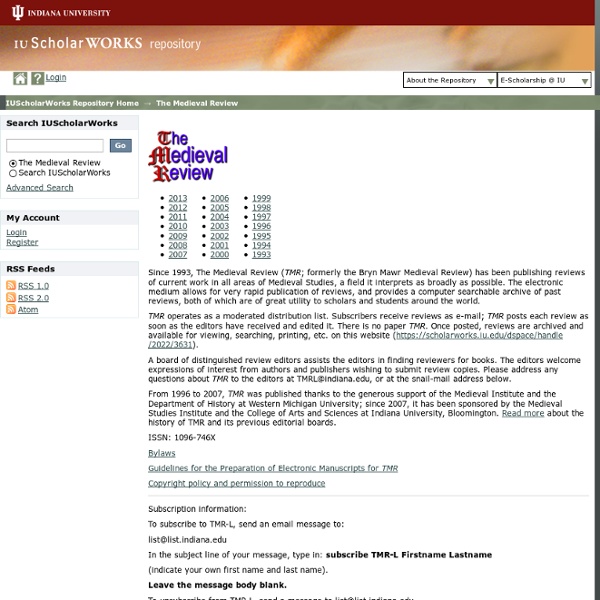 A Medieval Mirror "d0e4325" At the head of each page of the Speculum is a woodcut containing two scenes with captions below, in Latin, often heavily contracted. In the following descriptions these have been spelled out and a translation given. The biblical or other source reference for the text appears usually at the foot of the column and is occasionally erroneous or sometimes missing altogether.

Digitized Medieval Manuscripts Maps - Standard The “standard” Digitized Medieval Manuscripts Map is the simplest of the maps we have designed: It’s an easy to navigate map and it is constantly updated. It is based on our crowd-sourced data, to which you can contribute too! How is the Standard Map Made? This map uses Google Maps JavaScript API v3 in combination with Google Fusion Tables and the Sexy Codicology Data. This solution helps us update the map quickly, once we get a new link to a library that contains digitized medieval manuscripts.

Illuminated Manuscripts Manuscripts from the 8th to the 15th century Before the introduction of printing to Western Europe during the mid-15th century, all books were written by hand. The Latin for hand, ’manus’, and for writing, ’scriptum’, give us the word manuscript. Medieval manuscripts blog As the British Library's major exhibition Magna Carta: Law, Liberty, Legacy draws to a close — it's been an amazing 5 months — we'd like to take this opportunity to showcase some of the key British Museum loans in the display. The Library and the Museum have a long, shared history and a very close working relationship; and so we were absolutely delighted when the British Museum so kindly agreed to lend us some amazing objects for our exhibition. We're very grateful to our counterparts in the Departments of Coins and Medals, Prehistory and Europe and Prints and Drawing for making this possible.

EyeWitness To The Middle Ages and Renaissance Life in a Christian Monastery, ca. 585"When he was dead his body was not placed with the bodies of the brethren, but a grave was dug in the dung pit, and his body was flung down into it. . . " Crime and punishment in a medieval monastery: the monastery's Abbott provides insight into the monastic life. The Vikings Discover America, ca. 1000"There was no want of salmon either in the river or in the lake." Five hundred years before Columbus, the Vikings discover a New World. Invasion of England, 1066The Norman conquest of Anglo-Saxon England described through the images of the 900 year-old Bayeux Tapestry.

Internet History Sourcebooks Full Text Sources Links to full texts of books available at this and other sites will be listed here. The texts are also integrated within the overall structure of the Sourcebook. This listing is to aid compilers of web guides to online books, etc. The books that tend to have been put online here, or those that have been linked, tend to be those entire books that are often assigned to students in college classes to be read along with the more usual excerpted texts. Medievalist, Book Historian, Broadcaster. Lost in the Fifteenth Century. On 26 October 2013 I had the honour of presenting a paper at BBC Radio 3′s Free Thinking Festival. The theme of the festival was ‘Who’s in Control?’. Below is a transcript of the paper that I gave. It can be listened to, or downloaded as podcast, here.

A Glossary of European Noble, Princely, Royal and Imperial Titles Outline. 1. Introduction. 2. Sovereigns and Sovereignty. 3. Nobles and Nobility. 4. Resources, Programs, Research Episode Two: Among Believers The Story of the Jews PBS Simon Schama’s epic series continues with the story of medieval Jews struggling to preserve their identity — and sometimes their lives — under the rule of Christianity and Islam. Whether labeled “Christ-killers” by the Christians or “dhimmi” (non-Muslim citizens of an Islamic community) by the Muslims, diaspora Jews built new lives and invented new ways of being Jewish in exile. Continue Full Program