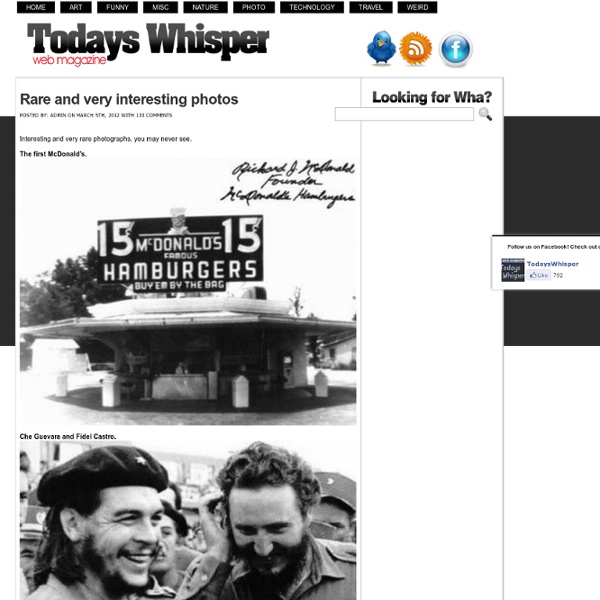 Interesting and very rare photographs, you may never see. The first McDonald’s. Che Guevara and Fidel Castro. Capital of Brazil, on the beginning. Pius XII and Hitler. The King. Rare Beatles photos. Osama bin Laden and his family. Titanic. Fall of the Berlin Wall All forms of Coca-Cola bottles. John Lennon shortly before his death. Principles. Statue of Jesus Christ in Rio de Janeiro, Brazil. Albert Einstein. Charlie Chaplin and Gandhi. First computer. Albert Einstein’s diploma. The early Beatles. The first team of Google. Pope John Paul and the man who tried to kill him. Moment when Bush heard about the attacks 11th September.

photography by Angus R Shamal A self portrait of Stanley Kubrick with his daughter, Jack Nicholson and the crew @ the set of The Shining. A selection of some of the most awesome Behind-the-scenes shots I’ve seen from some famous movies found at aintitcool.com. Back when set designs were huge and hand made, when special effects where mechanic and photographic and film stars were risking their lives on the set. on the set of Fritz Lang’s Metropolis — the actress inside the Maria robot taking a breather.

Petra: Lost City of Stone Deep within the deserts of Jordan lies the ancient city of Petra. Through a narrow gorge it emerges into view, revealing awe-inspiring monuments cut into the surrounding cliffs. What is this astonishing city? Who built it, and why? Two thousand years ago, Petra stood at a crossroads of the ancient Near East. Camel caravans passed through, loaded with spices, textiles and incense from distant regions--and through such commerce, the city flourished.

How Kentridge draws you in It was a dense, hour-long almost-performance, dancing between apparently unrelated thoughts using Plato's allegory of the cave, and its shadows, as a metaphor. Yes, he used a metaphor on a Thursday evening to explain how the rational philosopher feels he has the moral right and obligation to lead people from ignorance into knowledge. Or something like that. I know my Plato. Or so I thought.

Amazing Right Moment Captured of Zoo World The Wall of “I Love You”s in Paris How Olympic Athletes Party in London ???? Photo mania of Cutest Cat on The Internet by Ben Terode Lisa Kelly – A Cutest Truck Driver Amazing Right Moment Captured of Zoo World Top 10 Pictures That Shocked The World It has often been said throughout time that a picture is worth a thousand words. Any picture may be worth a thousand words, but only a few rare photos tell more than a thousand words. They tell a powerful story, a story poignant enough to change the world and galvanize each of us. Over and over again… maps home page Down to: 6th to 15th Centuries | 16th and 19th Centuries | 1901 to World War Two | 1946 to 21st Century The Ancient World ... index of places Aegean Region, to 300 BCE Aegean Region, 185 BCE

The Changing Shape of Cinema: The History of Aspect Ratio Aspect Ratio is a fundamentally simple concept with a deep and important history. Simply put, the aspect ratio is the ratio of the width of the image to the height. This can be expressed as two numbers like 4×3 or 16×9 or as a decimal such as 1.85 and 2.35 – though these can be written as a ratio as in 2.35:1. But how did it all begin? Animals Illuminated by the Sun The time of sunset is defined in astronomy as the moment when the trailing edge of the Sun’s disk disappears below the horizon in the west. There are few things in nature as photogenic as the sky at sunset, especially animals. The rich bright gold, pink and orange colors make unusually beautiful pictures of animals illuminated by the sun. Source Source Source

Photos by Henri Cartier-Bresson [1920's-1970's] Albert Camus, Paris, 1944. Coney Island, New York, 1946. Romania, 1975. Naples, Italy, 1960. A football game, Michigan vs. Northwestern, 1960. photos by Phil Stern James Dean Frank Sinatra Anita Ekberg Marlon Brando Family tree of the Greek gods Key: The essential Olympians' names are given in bold font. See also List of Greek mythological figures Notes AnimeBackgrounds aymrc: A selection of Backgrounds made for Space Dandy #9, episode imagined and directed by Eunyoung Choi. I had the chance to paint every backgrounds which took 4 and ½ month for 340 cuts. If you like those I can make an other selection :) Anyway I encourage you to watch the show!

Fairy Tale Cottages Okay here is something different. Cottages houses like what we feature today have been romanticized since the early fairy tales of Little Red Riding Hood and Hansel and Gretel and have a way of infinitely reminding us of gingerbread houses, and cookies, and sugar! What makes a cottage so distinctive from other small homes is its dark thatched roof, and the way it envelops the cottage like melted cheese. (funny how cottage cheese looks nothing like this) These homes were traditionally built by a waterfront and made out of logs or other natural materials. Also known as a cabin, they were used as a way of modest country living, but are now more popular as weekend and summer homes for city dwellers who are looking to get away.

CRACKED: 15 Mind-Blowing Old-Timey Photos As we've reminded you before, people in the past just didn't give a shit. They were too busy being crazy and taking pictures of it to be bothered with how those pictures would make them look in 80 or 90 years. It's like they're daring us to make sense of them, and once again, we've risen boldly to the challenge. #15. "That's Two People Sharing a Costume, Right?"