Year 10 outline for students. Reading log doc. Year 10 Term 3 Unit Reading and Comparing Texts. Do the groundwork. 4 IntroductIon to Wiesel. Night Study Guide. Life After the Holocaust. Ghettos. The term "ghetto" originated from the name of the Jewish quarter in Venice, established in 1516, in which the Venetian authorities compelled the city's Jews to live. 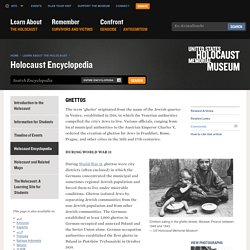 Various officials, ranging from local municipal authorities to the Austrian Emperor Charles V, ordered the creation of ghettos for Jews in Frankfurt, Rome, Prague, and other cities in the 16th and 17th centuries. DURING WORLD WAR II During World War II, ghettos were city districts (often enclosed) in which the Germans concentrated the municipal and sometimes regional Jewish population and forced them to live under miserable conditions.

Ghettos isolated Jews by separating Jewish communities from the non-Jewish population and from other Jewish communities. The Germans established at least 1,000 ghettos in German-occupied and annexed Poland and the Soviet Union alone. German occupation authorities established the first ghetto in Poland in Piotrków Trybunalski in October 1939. Resources Corni, Gustavo. Kermish, Joseph, editor. European Antisemitism from Its Origins to the Holocaust — Media. [Narrator] Between 1939 and 1945, the Nazis killed about six million Jews and millions of other civilians throughout Europe. 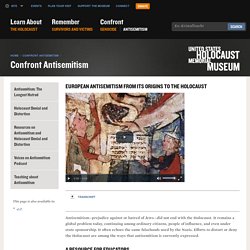 These are some who were slaughtered in the Holocaust—a generation lost forever. This case study examines the process of ghettoization of the Budapest Jewish population as it unfolded between May 1944 and January 1945 and from the perspectives of the victim, the perpetrator, and the bystander. 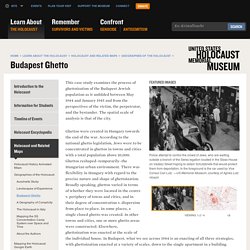 The spatial scale of analysis is that of the city. Ghettos were created in Hungary towards the end of the war. According to the national ghetto legislation, Jews were to be concentrated in ghettos in towns and cities with a total population above 10,000. Ghettos reshaped–temporarily–the Hungarian urban environment. There was flexibility in Hungary with regard to the precise nature and shape of ghettoization. A broad range of analytical frameworks are important in trying to understand the evolving shape of ghettoization in Budapest in 1944. Metacategories Scale: Urban, Neighborhoods Time: May 1944 to January 1945 Place: Budapest Experience: Authors Tim Cole and Alberto Giordano. Holocaust Encyclopedia. Behind Every Name a Story. Timeline of Events - Before 1933. The Secret Annex Online. Anne Frank House - Teachers' Portal. "Fragments of Memory": The Faces Behind the Documents, Artifacts, and Photographs Lesson Plan Based on the National Poster Competition for Holocaust Martyrs' and Heroes' Remembrance Day 751/2011 Grades: Middle and High SchoolDuration: 1.5 hours Contents: Opening First Prize Winner This lesson plan focuses on the winning design of this year's national competition to create a poster to mark Israel's Holocaust Martyrs' and Heroes' Remembrance Day held by Yad Vashem and the Israel Ministry of Public Diplomacy and Diaspora Affairs (5751/2011). 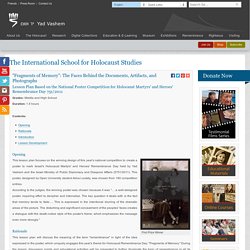 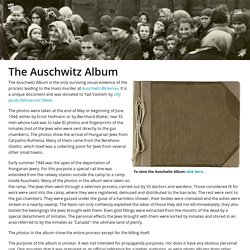 The Auschwitz Album is the only surviving visual evidence of the process leading to the mass murder at Auschwitz-Birkenau. It is a unique document and was donated to Yad Vashem by Lilly Jacob-Zelmanovic Meier. This special on-line exhibition, based on the Yad Vashem Art Collection, features works created between 1945 and 1947 and attempts to investigate how survivors reacted to the liberation through art. 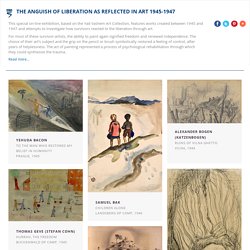 For most of these survivor-artists, the ability to paint again signified freedom and renewed independence. The choice of their art's subject and the grip on the pencil or brush symbolically restored a feeling of control, after years of helplessness. The act of painting represented a process of psychological rehabilitation through which they could synthesize the trauma. Some artists, like Thomas Geve or Alfred Glück document the very moment of liberation, only several weeks thereafter, while others give expression to the renewed feeling of freedom (Neumann, Zim). In contrast, a group of artists express anguish, solitude and distress via the self-portrait (Bak, Gedő) or by depicting the wasteland that greeted the survivors upon their return home (Bogen, Hechtkopf). History, the Holocaust. Graphic Biography. The Anne Frank House is interested in making Anne Frank’s story accessible to the widest possible audience. 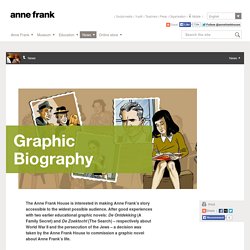 After good experiences with two earlier educational graphic novels: De Ontdekking (A Family Secret) and De Zoektocht (The Search) – respectively about World War II and the persecution of the Jews – a decision was taken by the Anne Frank House to commission a graphic novel about Anne Frank’s life. The style selected, referred to as graphic non-fiction – a standard comic book format with a long tradition in the United States – is gaining popularity as a genre in Europe.

Together with New York publishing company Hill & Wang, the Anne Frank House approached Sid Jacobson (writer) and Ernest Colón. This experienced creative team wholeheartedly dedicated themselves to the biography about Anne Frank, supported by experts from the Anne Frank House. ‘A crown on our careers,’ according to the duo. What a wonderful book. . , Pen name Lies, Anne’s classmate & friend. Exhibitions. "Fighting for Freedom"Special Exhibition Marking 70 Years since VE Day The Death Marchto Volary 1300 women. 500 miles. 106 days. 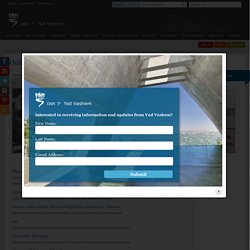 History, the Holocaust. A God Who Remembers.