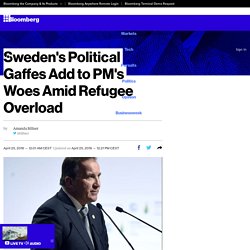 You’d be wrong. QuickTake Europe’s Refugee Crisis Missteps by the group are adding to the woes Social Democratic Prime Minister Stefan Loefven, whose government is buckling under record low poll numbers amid the biggest inflow of refugees in history. The Greens haven’t had it easy since joining the government in 2014 but last week was especially bad.

One of its ministers resigned amid links to Turkish nationalists and revelations he had compared Israel’s policies to Nazism. At week’s end, an exasperated premier said he couldn’t exclude a broader cabinet reshuffle and that a decision would come soon. Sweden sees costs of migration crisis almost quadruple – EurActiv.com. The costs of the wave of asylum seekers arriving in Sweden due to the refugee crisis will be much greater than previously expected, forcing the government to earmark more money in the coming years. 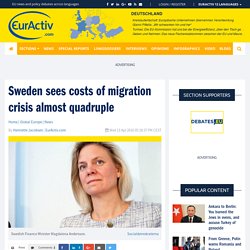 Sweden’s Finance Minister Magdalena Andersson on Wednesday (13 April) presented the centre-left government’s 2016 spring budget, which revealed that the Scandinavian country expects costs related to migration, such as providing accommodation and offering job training, will be close to 56 billion Swedish crowns (€6.1 billion) per year until 2020. The government had previously forecast 15 billion Swedish crowns (€1.6 billion) annually. Sweden migrant crisis pushing country to breaking point. Sweden is absorbing the vast majority of the migrants coming to Europe to seek asylum and the country is now in turmoil. 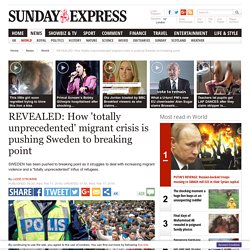 Violence and crime has swept the nation with police declaring they now have entire areas which are ‘no-go’ zones. In 2015 alone Sweden, with a population of 9.5million, received over 160 000 asylum applications and the country is expected to take as many as 190,000 refugees, or two per cent of the population, in 2016. Since the Second World War Sweden has prided itself on helping migrants who cross their borders despite some moves to the political right in recent years. But now the once welcoming country has turned into a battle ground where Swedes are afraid to go outside and police are openly attacked by migrants.

In a secret report by Sweden's National Criminal Investigation Service attacks on officers are detailed including police cars being stoned by masked groups. On February 6 Express.co.uk revealed a map with nearly 20 sex attacks that happened in January alone. Sweden is a perfect example of how not to handle the Great Migration. Perhaps the hardest problem facing Sweden, though, is the same one confronting David Cameron: what to do about unaccompanied children? 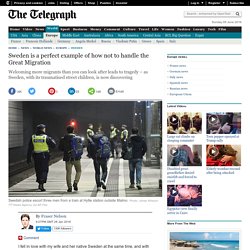 They are an increasing part of the Great Migration, some separated from their parents under awful circumstances, some orphaned by war. The argument for accepting them is as powerful as it is simple: adults might be asked to fend for themselves elsewhere, but what kind of government would turn back a child? Swedish government struggling over migrant crisis. Image copyright Reuters Sweden has found itself in the unusual position of being in the international spotlight in recent months. 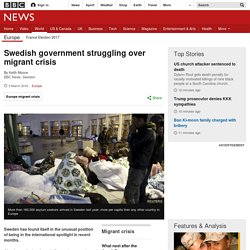 Checks on the border with Denmark, accusations of migrant sex assaults being covered up, a killing in an asylum centre and an anti-corruption investigation into a senior politician are just some of the stories that have made headlines. Can Sweden teach our schools a lesson? By September the pupils will have designed their new uniform. 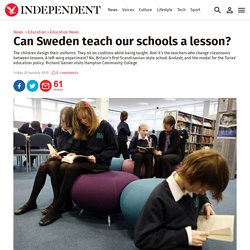 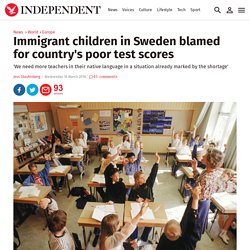 A report by the government-run Swedish Education Agency said more resources were needed for schools with large numbers of pupils who are immigrants or who have two immigrant parents. It said immigrant children were 85 per cent accountable for a four-per-cent increase in the number of children failing to get good enough grades in the final years of school, according to AFP. 'It's a political failure': how Sweden's celebrated schools system fell into crisis. Gustav Fridolin, Sweden’s rather youthful education minister, emerges from behind his desk in a pleasant office in central Stockholm wearing what looks like a pair of Vans and the open, fresh-faced smile of a newly qualified teacher. 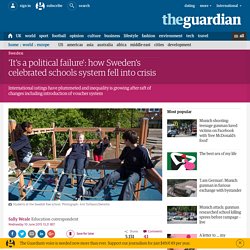 The smile falters when he begins to describe the plight of Sweden’s schools and the scale of the challenge that lies ahead. Fridolin, it turns out, is the man in charge of rescuing a school system in crisis. Sweden, once regarded as a byword for high-quality education – free preschool, formal school at seven, no fee-paying private schools, no selection – has seen its scores in Programme for International Student Assessment (Pisa) assessments plummet in recent years. Swedish education: Fixing Sweden’s schools. A NEW study from the Programme for International Student Assessment (PISA) will land on the desks of policymakers around the world next month. 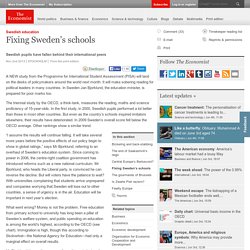 It will make sobering reading for political leaders in many countries. In Sweden Jan Bjorklund, the education minister, is prepared for poor marks too. The triennial study by the OECD, a think-tank, measures the reading, maths and science proficiency of 15-year-olds. In the first study, in 2000, Swedish pupils performed a lot better than those in most other countries. But even as the country’s schools inspired imitators elsewhere, their results have deteriorated. “I assume the results will continue falling. What went wrong? Sweden's housing minister resigns amid 'extremist links' row. Sweden’s housing minister has resigned following a week of mounting controversy over his contacts with Islamic organisations and Turkish ultranationalists, piling further pressure on the country’s already unpopular minority coalition government. 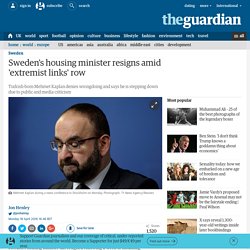 The Social Democrat prime minister, Stefan Lofven, said Turkish-born Mehmet Kaplan, a member of the junior coalition partner Green party and former spokesman for Sweden’s Muslim Council, had submitted his resignation and that he had accepted it. Sweden’s centre-left coalition of Social Democrats and Greens has been severely strained by Europe’s migration crisis, with the arrival of about 160,000 asylum seekers in the country last year forcing Stockholm to impose border controls and tighter rules in a U-turn on decades of generous refugee policies.

Kaplan, 44, denied any wrongdoing and said he was stepping down because public and media criticism was making it impossible for him to do his job. Woman who defied 300 neo-Nazis at Swedish rally speaks of anger. Sweden leads the race to become cashless society. In 1661, Stockholms Banco, the precursor to the Swedish central bank, issued Europe’s first banknotes, on thick watermarked paper bearing the bank’s seal and eight handwritten signatures. Last year – as Britain did last week – Sweden launched a new series of notes, cheery affairs featuring 20th-century Swedish cultural giants such as Astrid Lindgren, the creator of Pippi Longstocking, Greta Garbo and filmmaker Ingmar Bergman. But like its Nordic neighbours Norway, Denmark and Finland, Sweden is fast becoming an almost entirely cashless society.

“I don’t use cash any more, for anything,” said Louise Henriksson, 26, a teaching assistant. “You just don’t need it. Shops don’t want it; lots of banks don’t even have it. Swedish buses have not taken cash for years, it is impossible to buy a ticket on the Stockholm metro with cash, retailers are legally entitled to refuse coins and notes, and street vendors – and even churches – increasingly prefer card or phone payments.