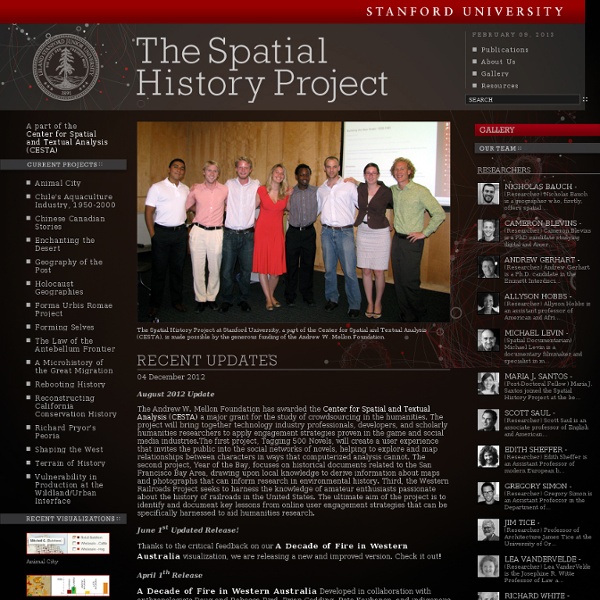 Mapping the Republic of Letters Historical GIS Research Network This list is not exhaustive but we aim to include all of the major historical GIS websites plus additional relevant websites. Other portals are also available such as those from: the GeoHumanities Special Interest Group of the Alliance of Digital Humanities Organizations, the Humanities GIS Zotero Library, and the University of Saskatchewan's HGIS Lab. Resources are classed under: National Historical GISs Other online Historical GIS projects Historical map servers and other data sources Organisations Software Other useful sites National Historical GISs: Other online Historical GIS projects: European Communications and Transport Infrasturctures: Performance and potentials, 1825-2000: Digital Atlas of the History of Europe since 1500: Mapping Decline: St. Virtual Kyoto: Euratlas: Imagining London: Back to top Organisations:

Ocupar Archivo Locating London's past: a geo-referencing tool for mapping historical and archaeological evidence, 1660-1800 Locating London´s Past has created an intuitive GIS interface that enables researchers to map and visualize textual and artefactual data relating to seventeenth and eighteenth-century London against a fully rasterised version of John Rocque´s 1746 map of London and the first accurate modern OS map (1869-80). More than this, it makes these data and maps available within a Google Maps container, allowing for the analysis of the data with open source visualization tools. The interface is readily expandable to include additional data sets and maps (both modern and historic). Building on the partnerships created through the JISC funded Connected Histories project, and through a new collaboration with the Museum of London Archaeological Service (MOLA), Locating London´s Past has produced a working GIS-enabled public web environment that allows existing electronic historical data about London to be repackaged and organised around space. The project incorporates four elements.

Froide - Freedom Of Information Software Open Source! Froide is free software and actively developed on GitHub. It's licensed under the permissive MIT license. Froide on GitHub » Maintained! Froide 3.0 uses the popular Python Web framework Django and its ecosystem in the most up-to-date version 1.5. Read more about Django » High test coverage! Froide on Travis CI » Powered by German Engineering. Froide has been in active deployment for over two years and powers FragDenStaat.de and FragDenStaat.at - the German and Austrian FOI site. Because it is built with latest Bootstrap it comes with a responsive design and is easily themeable. Many laws, jurisdictions, entities. You can start small and scale up to many jurisdiction and laws. All the features you need. You need your users to send their name and keep it private? Integrate your community. With the Django admin interface you control every single piece of data.

Welkom op de HisGIS site! — HisGIS Anunciando CKAN 2.0 | Conocimiento Abierto Fundación Blog CKAN is a powerful, open source, open data management platform, used by governments and organizations around the world to make large collections of data accessible, including the UK and US government open data portals. Today we are very happy and excited to announce the final release of CKAN 2.0. This is the most significant piece of CKAN news since the project began, and represents months of hectic work by the team and other contributors since before the release of version 1.8 last October, and of the 2.0 beta in February. Thank you to the many CKAN users for your patience – we think you’ll agree it’s been worth the wait. CKAN 2.0 is a significant improvement on 1.x versions for data users, programmers, and publishers. Summary CKAN 2.0 introduces a new sleek default design, and easier theming to build custom sites. Design and theming The first thing that previous CKAN users notice will be the greatly improved page design. Authorisation and workflow: introducing CKAN ‘Organizations’

Humanities & GIS Tutorials A Place in History: A Guide to Using GIS in Historical Research Data Archives AHDS: Arts and Humanities Data Service Includes training materials and a large number of case studies in a wide variety of subjects. Other Resources Census Data at Stanford Information on how to find and use Census data from 1790 to the present. Last modified: October 7, 2008 Textus Home | LOCATING LONDON'S PAST AnnotationStudio