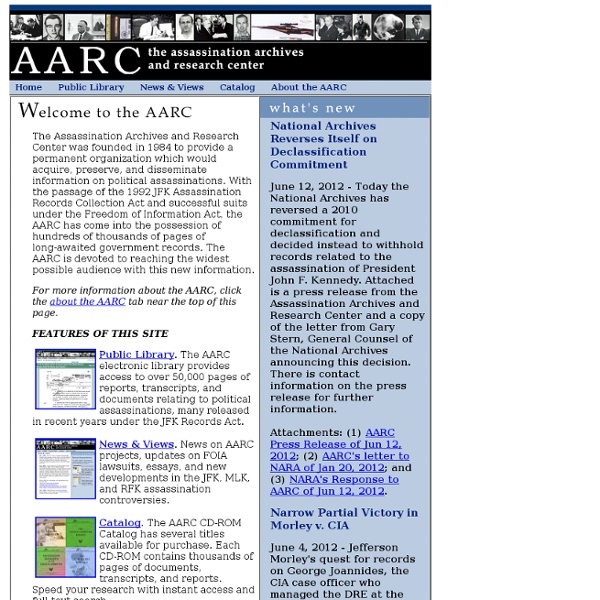 BAR ASSOCIATION HISTORY & WHO OWNS THE U.S. {THE REAL AMERICAN HISTORY NOT TAUGHT IN SCHOOLS ON THE 227th ANNIVERSARY OF THE FIRST 4th Of July 1776} History of “BAR ASSOCIATIONS” The Crown Temple Secret Society of theThird Way Order by Rule of Mystery Babylon. The Templars of the Crown. The governmental and judicial systems within the United States of America, at both federal and local state levels, is owned by the “Crown,” which is a private foreign power. Presidential Assassinations Books about Presidential Assassinations and related matters The President Has Been Shot : True Stories of the Attacks on Ten U.S. Presidents In the President's Secret Service: Behind the Scenes with Agents in the Line of Fire and the Presidents They Protect

Diary of Soviet ambassador to London rewrites history of World War II Stalin’s terror and purges of the 1930s discouraged any Soviet official from putting a pen to paper, let alone keep a personal diary. The sole exception is the extraordinarily rich journal kept by Ivan Maisky, the Soviet ambassador to London between 1932 and 1943, which I unearthed in the archives of the Russian Foreign Ministry in Moscow. No personal document of such breadth, value and size has ever emerged from the Soviet archives. For the last decade I have scrupulously edited and checked the diary against a vast range of Russian and Western archival material as well as personal papers to allow the wider public access to this remarkable relic.

Why doesn't Russia make a big deal about its role in liberating Nazi Holocaust death camps? The documentary Night will Fall tells the story of German Concentration Camps Factual Survey, a film made by the Allied forces who filmed the scenes of the Nazi concentration camps as they liberated them. The film was intended to be shown to the German public immediately after World War II, but could not be finished. The part that was not completed depicted the camps of Majdanek and Auschwitz, liberated by the Soviet Red Army and filmed by Soviet camera crews. The Soviets' role in liberating those camps, and the newsreels they made about them, became problematic for the British team making the documentary as the Soviet Union moved from being seen as a wartime ally to a Cold War adversary. Only now has the film been restored.

Secret World War II Chemical Experiments Tested Troops By Race These historical photographs depict the forearms of human test subjects after being exposed to nitrogen mustard and lewisite agents in World War II experiments conducted at the Naval Research Laboratory in Washington, D.C. Courtesy of the Naval Research Laboratory hide caption itoggle caption Courtesy of the Naval Research Laboratory As a young U.S. Lincoln Papers: Lincoln Assassination: Introduction Abraham Lincoln Papers On the evening of April 14, 1865, while attending a special performance of the comedy, "Our American Cousin," President Abraham Lincoln was shot. Accompanying him at Ford's Theater that night were his wife, Mary Todd Lincoln, a twenty-eight year-old officer named Major Henry R. Commemoration of WWII casualties in Belarus On 22 June 2015, the President of Belarus, Alexander Lukashenko opened a new memorial complex at the site of the former extermination camp Maly Trostenets near Minsk. Between 1941 and 1944, German occupants and their helpers interned and killed up to 206,500 people in this camp and in the nearby forest of Blagovshchina. The memorial complex marks the site of the largest extermination camp in German-occupied Soviet territories, but also commemorates victims throughout Belarus and its six oblasty (regions). The opening ceremony marked a milestone for Belarus’ memory of the Nazi genocide.

Lobotomy For World War II Veterans: Psychiatric Care by U.S. Government Documentary In His Own Voice Roman Tritz talks about his lobotomy, and his life. By September 1953, though, he had brightened, working jigsaw puzzles and playing checkers with other patients. Studio Musicians and 1960s Popular Music Industry The popular music industries of the 1960s produced thousands of recordings with each studio relying on an infrastructure of producers, engineers, music directors, songwriters, and, of course, musicians. In recent years, documentaries have introduced us to instrumentalists and singers who formed the artistic backbones of America’s major studios. In Detroit, The Funk Brothers kept Motown’s assembly line of hits purring for The Supremes, The Four Tops, The Temptations, and many others. In Los Angeles, the so-called Wrecking Crew gave us the instrumental backing for The Beach Boys, The Byrds, and The Mamas and the Papas, to name only a few. Indeed, every major studio relied on such professionals, whether in Muscle Shoals, Memphis, Chicago, or New Orleans.

Papal Bull Background A Papal Bull is a formal document issued by a Roman Death Cult Pontiff upon a major act of law, curse or claim to extend the power of the Cult over its claimed domination of the world, all nations, all people, all law and all religions. All legitimate Papal Bulls were issued on human skin, usually the skin of a sacrificed child, or some famous heretic. Forgeries are on calf skin or some other lesser medium. Heldt090300 September 3, 2000 Nearly two hundred manila wrapped pages of George Walker Bush's service records came to me like some sort of giant banana flip stuffed into my mailbox. I had been seeking more information on just what may have happened to him to account for the fact that his discharge papers show no record that he performed any duty or drills for the last 18 months of his service as had been reported by the Boston Globe. [1] So it was natural that one of the first pages I examined was a chronological listing of Bush's service. [Document 10]

The Polio Vaccine Cancer Cover-up The polio vaccines developed in the 1950s by Jonas Salk and Albert Sabin allegedly eradicated one of the most feared diseases of the 20th century. The media hailed the success of these vaccines as a modern day miracle. However, the polio story has a much darker side that has mostly been kept a secret.