Students, get citable references for your research with The Full Wiki 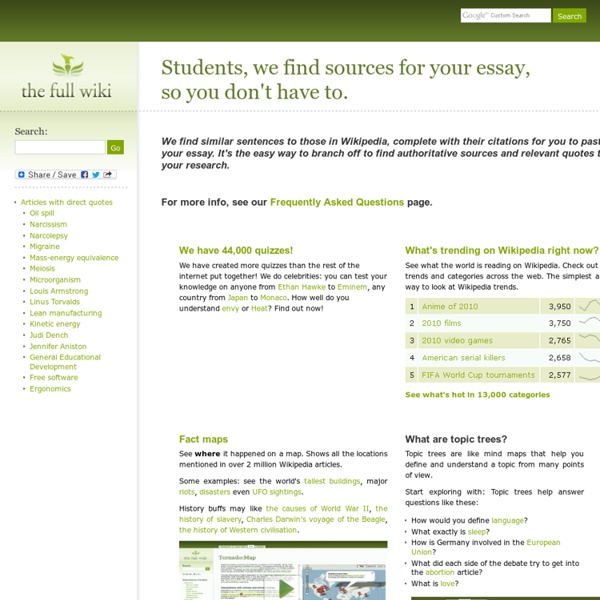 WikiGalaxy: Explore Wikipedia in 3D Fuel your fascination Main Page - KeyWiki AcaWiki academic papers Wikipedia Editors Uncover Extortion Scam And Extensive Cybercrime Syndicate Wikipedia, the world’s online trove of collective knowledge, is in the midst of a international extortion scandal, where editors secretly charged businesses and artists a fee to create and “protect” articles. The Wikimedia Foundation, the non-profit organization that sponsors but does not operate Wikipedia, announced Monday that at least 381 accounts have been suspended for “black hat” editing, in which editors charge and accept money for “to promote external interests.” The scam affects English Wikipedia, which boasts 4.9 million articles, has over 26 million users, and 1,343 administrators, according site statistics. “This, for better or worse, is pure greed,” said Andrew Lih, a longtime Wikipedian and journalism professor at American University in Washington, D.C. Wikipedia is community-run by a slew of dedicated anonymous or pseudonymous volunteer editors. Orangemoody isn’t the first Wikipedia editing-for-money scandal. “Their job is to support the community.

GazoPa similar image search Wikispecies, free species directory Main Page Ancient whistle language uses whole brain for long-distance chat Alexander Christie-Miller You could say they sent the first tweets. An ancient whistling language that sounds a little like birdsong has been found to use both sides of the brain – challenging the idea that the left side is all important for communicating. The whistling language is still used by around 10,000 people in the mountains of north-east Turkey, and can carry messages as far as 5 kilometres. Researchers have now shown that this language involves the brain’s right hemisphere, which was already known to be important for understanding music. Until recently, it was thought that the task of interpreting language fell largely to the brain’s left hemisphere. His team tested 31 fluent whistlers by playing slightly different spoken or whistled syllables into their left and right ears at the same time, and asking them to say what they heard. As expected, when the syllables were spoken, the right ear and left hemisphere were dominant 75 per cent of the time. Canary island tweets

Waking from the Middle East Nightmare by Javier Solana Exit from comment view mode. Click to hide this space MADRID – The Middle East is caught in a seemingly endless spiral of instability. The possibility of military intervention in Syria, together with the deteriorating situation in Egypt since the army’s coup, has placed the region on a razor’s edge. Paradoxes abound, as the United States’s traditional Middle East allies (Saudi Arabia, Israel, Turkey, Egypt, and the Gulf states) have taken opposing – and sometimes seemingly contradictory – positions on the region’s key conflicts. Saudi Arabia, fearing severe domestic consequences from the Muslim Brotherhood’s empowerment in Egypt, does not want to see an Islamist movement legitimized democratically. Israel, for its part, is exerting pressure in two ways. The civil war in Syria, meanwhile, has inflamed the Sunni-Shia fault line that traverses the entire region, and that defines, for example, the rivalry between Saudi Arabia and Iran.

The Geography of Profanity - Pacific Standard “Asshole is a wonderful word,” said Mike Pesca in his podcast, the Gist. His former colleagues at NPR had wanted to call someone an asshole, and even though it was for a podcast, not broadcast, and even though the person in question was a certified asshole, the NPR censor said no. Pesca disagreed. Pesca is from Long Island and, except for his college years in Atlanta, he has spent most of his time in the Northeast. Linguist Jack Grieve has been analyzing tweets—billions of words—and recently he posted maps showing the relative popularity of different expletives. To my knowledge, Grieve has offered no explanation for this distribution, and I don’t have much to add. Less surprising are the maps of toned-down expletives. Mr. Aside from the insight about Trump’s religious views, Kruse reflects the linguistic preferences of her region, where “damn” gets softened to “darn.” Unfortunately, Grieves did not post a map for “heck.” Advertisement — Continue reading below

List of wikis This page contains a list of notable websites that use a wiki model. These websites will sometimes use different software in order to provide the best content management system for their users' needs, but they all share the same basic editing and viewing website model. §Table[edit] §See also[edit] §References[edit] §External links[edit]