The Jim Joseph Foundation, The Jewish Communal Fund & Others Must Stand With Israel Against Enemies. Printed from: Scan this QR code to visit this page online: 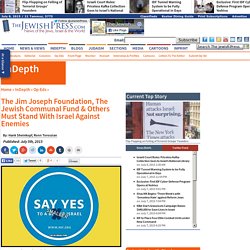 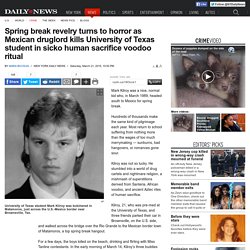 -Mexico border near Brownsville, Tex. Mark Kilroy was a nice, normal kid who, in March 1989, headed south to Mexico for spring break. Hundreds of thousands make the same kind of pilgrimage each year. Most return to school suffering from nothing more than the wages of too much merrymaking — sunburns, bad hangovers, or romances gone sour. Kilroy was not so lucky. Kilroy, 21, who was pre-med at the University of Texas, and three friends parked their car in Brownsville, on the U.S. side, and walked across the bridge over the Rio Grande to the Mexican border town of Matamoros, a top spring break hangout. For a few days, the boys lolled on the beach, drinking and flirting with Miss Tanline contestants. Crowds of young revelers had the same idea, so the streets were packed.

Police at the time did not suspect that Little Serafin had anything to do with Kilroy’s disappearance. Delcia Lopez/ASSOCIATED PRESS. John Blanke, the Tudors ‘blacke trumpeter’ When one considers the people of Tudor England, one aspect often not given much thought is the presence of a non-white community. 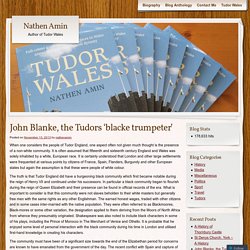 It is often assumed that fifteenth and sixteenth century England and Wales was solely inhabited by a white, European race. It is certainly understood that London and other large settlements were frequented at various points by citizens of France, Spain, Flanders, Burgundy and other European states but again the assumption is that these were people of white colour.

The truth is that Tudor England did have a burgeoning black community which first became notable during the reign of Henry VII and continued under his successors. In particular a black community began to flourish during the reign of Queen Elizabeth and their presence can be found in official records of the era. What is important to consider is that this community were not slaves beholden to their white masters but generally free men with the same rights as any other Englishman. Like this: Lenstra.pdf. Did Israel Put Money Over Justice? ON April 17, 2006, a Palestinian suicide bomber killed 11 people near the old Tel Aviv bus station. 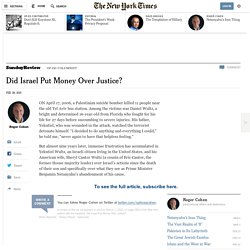 Among the victims was Daniel Wultz, a bright and determined 16-year-old from Florida who fought for his life for 27 days before succumbing to severe injuries. His father, Yekutiel, who was wounded in the attack, watched the terrorist detonate himself. “I decided to do anything and everything I could,” he told me, “never again to have that helpless feeling.” But almost nine years later, immense frustration has accumulated in Yekutiel Wultz, an Israeli citizen living in the United States, and his American wife, Sheryl Cantor Wultz (a cousin of Eric Cantor, the former House majority leader) over Israel’s actions since the death of their son and specifically over what they see as Prime Minister Benjamin Netanyahu’s abandonment of his cause.

They say there is evidence that the bomber who killed their son was backed by Iranian money that was laundered through China. Photo. Unexpected row over Jim Murphy's Catholic faith. The church, historically not a close ally of Roman Catholicism, has accused the SSS of sectarian behaviour after the group made repeated remarks about Mr Murphy's RC faith. 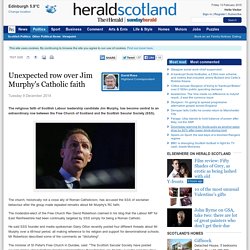 The moderator-elect of the Free Church Rev David Robertson claimed in his blog that the Labour MP for East Renfrewshire had been continually targeted by SSS simply for being a Roman Catholic. He said SSS founder and media spokesman Garry Otton recently posted four different threads about Mr Murphy over a 48-hour period, all making reference to his religion and support for denominational schools. Mr Robertson described some of the comments as "disturbing". The minister of St Peter's Free Church in Dundee, said: "The Scottish Secular Society have posted several stories about 'Catholic fanatic/extremist/Pope Benedict fan' Jim Murphy over the past few days.

"I find it particularly disturbing this constant referral to Jim Murphy as Roman Catholic - what does that have to do with anything? Contextual targeting label: Battle of Wood Lake. The Battle of Wood Lake was a battle in the Dakota War of 1862 in September. 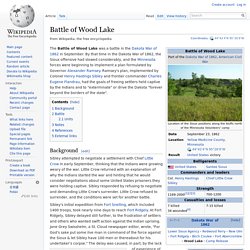 By that time in the Dakota War of 1862, the Sioux offensive had slowed considerably, and the Minnesota forces were beginning to implement a plan formulated by Governor Alexander Ramsey. Ramsey's plan, implemented by Colonel Henry Hastings Sibley and frontier commander Charles Eugene Flandrau, had the goals of freeing settlers held captive by the Indians and to "exterminate" or drive the Dakota "forever beyond the borders of the state".