Six Neville Sisters: Sisters of the Kingmaker. By Jone Johnson Lewis We know quite a bit about the Kingmaker in British history – but what about his sisters? 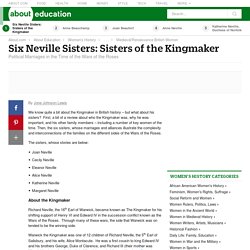 First, a bit of a review about who the Kingmaker was, why he was important, and his other family members – including a number of key women of the time. Then, the six sisters, whose marriages and alliances illustrate the complexity and interconnections of the families on the different sides of the Wars of the Roses. The sisters, whose stories are below: Joan NevilleCecily NevilleEleanor NevilleAlice NevilleKatherine NevilleMargaret Neville. Mary of Guise. Early life[edit] When Mary was five, she was godmother to her younger sister Louise. 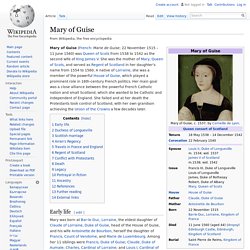 Not long after, she joined her grandmother Philippa of Guelders in the convent of the Poor Clares at Pont-à-Mousson. Her uncle Antoine, Duke of Lorraine and her aunt Renée of Bourbon visited Philippa there when Mary was about fourteen. Impressed by their niece's qualities and stature, they took her away from the convent and prepared her for life at the French court. In 1531, Mary made her first appearance there at the marriage between Francis I and Eleanor of Austria. 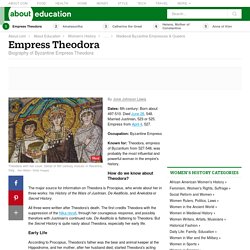 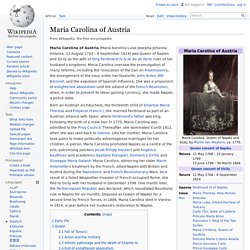 As de facto ruler of her husband's kingdoms, Maria Carolina oversaw the promulgation of many reforms, including the revocation of the ban on Freemasonry, the enlargement of the navy under her favourite, John Acton, 6th Baronet, and the expulsion of Spanish influence. She was a proponent of enlightened absolutism until the advent of the French Revolution, when, in order to prevent its ideas gaining currency, she made Naples a police state. Born an Austrian archduchess, the thirteenth child of Empress Maria Theresa and Emperor Francis I, she married Ferdinand as part of an Austrian alliance with Spain, where Ferdinand's father was king. Following the birth of a male heir in 1775, Maria Carolina was admitted to the Privy Council.

Thereafter, she dominated it until 1812, when she was sent back to Vienna. Lady Godiva. Facts and interesting information about famous Medieval Women, specifically a short biography ofLady Godiva and her Medieval Life and TimesFamous as the woman who rode naked through Coventry Lady GodivaThe Medieval Times encompass one of the most exciting periods in the History of England and Europe. 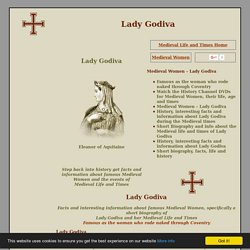 The names of many famous Medieval women scatter the Medieval History books and other historical documents - they were mostly queens and princesses. But what about the women who were not of noble birth? Who were these Medieval women who became famous despite the dominance of men during this era? Margaret I of Denmark. Margaret I (Danish: Margrete Valdemarsdatter, Norwegian: Margrete Valdemarsdatter, Swedish: Margareta Valdemarsdotter, Icelandic: Margrét Valdimarsdóttir),[A] (March 1353[2] – 28 October 1412), was Queen of Denmark, Norway and Sweden and founder of the Kalmar Union, which united the Scandinavian countries for over a century. 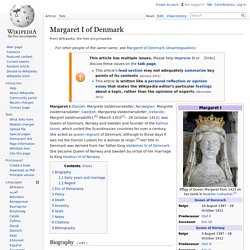 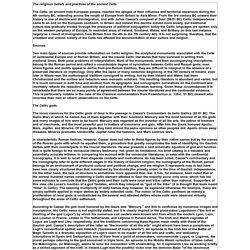 The Celts, an ancient Indo-European people, reached the apogee of their influence and territorial expansion during the 4th century BC, extending across the length of Europe from Britain to Asia Minor. From the 3rd century BC onward their history is one of decline and disintegration, and with Julius Caesar's conquest of Gaul (58-51 BC) Celtic independence came to an end on the European continent. Judith of Flanders (c. 843 – 870) was a great-granddaughter of Charlemagne, the eldest daughter of the Frankish King and Holy Roman Emperor, Charles the Bald of the House of the Carolingians. 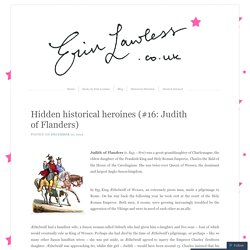 She was twice-over Queen of Wessex, the dominant and largest Anglo-Saxon kingdom. In 855 King Æthelwulf of Wessex, an extremely pious man, made a pilgrimage to Rome. On his way back the following year he took rest at the court of the Holy Roman Emperor. Both men, it seems, were growing increasingly troubled by the aggression of the Vikings and were in need of each other as an ally. Æthelwulf had a handfast wife, a Saxon woman called Osburh who had given him a daughter and five sons – four of which would eventually rule as King of Wessex. As it turned out, Æthelbald had no need for concern, as Judith had no children by Æthelwulf, who died on 13 January 858. All of Europe was aghast. Emperor Charles was furious and immediately sent men after the couple. 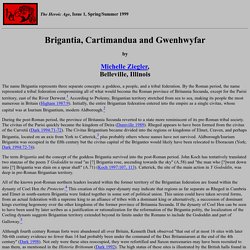 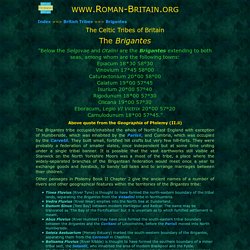 " The Brigantes tribe occupied/inhabited the whole of North-East England with exception of Humberside, which was inhabited by the Parisii, and Cumbria, which was occupied by the Carvetii. They built small, fortified hill crofts but very few hill-forts. They were probably a federation of smaller states, once independent but at some time uniting under a single tribal banner. Kingdoms of British Celts - Brigantes. Brigantes (Britons) Incorporating the Carvetii, Gabrantovices, Lopocares, Setantii, and Textoverdi The powerful Celtic Brigantes counted as their territory all of the north of England except Humberside.

They seem in fact to have been a collection of amalgamated tribes that took their name from the Celtic goddess Brigantia (as did the Brigantii tribe in the Alps and the Brigantes of Ireland). The Brigantes had few hill forts and their settlements were mostly in the form of small hill crofts. Æthelflæd. Æthelflæd, Lady of the Mercians (d. 12 June 918), ruled Mercia from 911 to her death in 918. Cartimandua (ruled c. 43 – 69) was a queen of the Brigantes, a Celtic people in what is now the ‘neck’ of England. A contemporary of the rebellious – and much more famous – Boudica, she is the only queen that the Romans recognised in her own right, referring to her as ‘regina’ in their writings. Her name may be a compound of common Celtic roots, meaning either “well-groomed” or “sleek” pony (mandu). There is very little archaeological evidence of fortified hillforts in the north of Britain, as opposed to the south, and this is taken as a sign of peace throughout her lands.

Cartimandua was already queen of the Brigantes when the Roman Emperor Claudius began his organised conquest of Britannia in 43. It is not made clear as to whether or not she was a puppet placed there by Rome or had ruled prior to their arrival. Saint Eormenburg (late 7th century) is a mythohistorical figure from Kentish royal legend, a granddaughter of the great Kentish king Eadbald (616-640). She is also known as “Domne Eafe”, which is probably a vernacular corruption of the Latin Domina (Lady) Æbbe. Eormenburg’s two brothers – Æthelberht and Æthelred – were fostered by their elder cousin, the then Kentish king, Egbert. It is probable that Eormenburg’s father (Eormenred) had once shared kingship with his brother (Egbert’s father), and so his two sons were afforded respect and deference after his death.

However, someone working for Egbert murdered the two boys in his fear that they would grow to prove themselves rivals to his master. He concealed the corpses under the ‘throne’ in the palace, however his crime was soon discovered. Aghast at the crime that had been carried out in his name, and concerned that it may spark a blood feud, Egbert offered reparations to the boys’ sister. Like this: Like Loading... Ælfthryth of Devon (c. 945 – c.1001) was a Saxon Queen: wife, stepmother and mother to a succession of kings. She was in fact the first king’s wife known to have been crowned and anointed as Queen of the Kingdom of England. Grace O’Malley (Gráinne Ní Mháille), c. 1530 – c. 1603, was Queen of Umaill, chieftain of the Ó Máille clan and a pirate (yes, a pirate) of Tudor Ireland. She is more commonly known by her nickname Granuaile. Æthelflæd. Warrior Princess and then some!

Nest ferch Rhys (c. 1085 – c. 1136) – or Agnes, daughter of Rhys – was a Welsh princess from the High Middle Ages. Image uploaded by @kellology_blog (Kelly Gregory) The-first-500-books-from-the-vatican-librarys-massive-digitisation-project-are-now-online-2014-10?utm_content=buffera6098&utm_medium=social&utm_source=twitter. The Vatican Library was founded in 1451 by Nicholas V. It holds some 180,000 manuscripts, 1.6 million books and 150,000 images and engravings. Elizabeth Stuart, Queen of Bohemia.