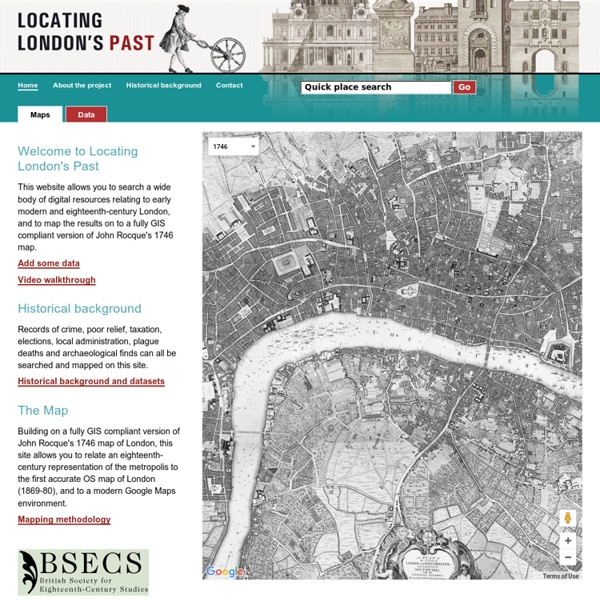 Welcome to Locating London's Past This website allows you to search a wide body of digital resources relating to early modern and eighteenth-century London, and to map the results on to a fully GIS compliant version of John Rocque's 1746 map. Video walkthrough Historical background Records of crime, poor relief, taxation, elections, local administration, plague deaths and archaeological finds can all be searched and mapped on this site. Historical background and datasets

Humanities & GIS Tutorials A Place in History: A Guide to Using GIS in Historical Research Data Archives AHDS: Arts and Humanities Data Service Includes training materials and a large number of case studies in a wide variety of subjects. HDS: History Data Service A data warehouse located in England. About our Map images In our 'Map images' resource you can access and view over 86,000 maps as high-resolution, colour, zoomable images. The maps date between 1560 and 1961 and relate primarily to Scotland. We also have maps of areas beyond Scotland, including maps of England and Great Britain, Ireland, and Belgium. Find by Place

Locating London's past: a geo-referencing tool for mapping historical and archaeological evidence, 1660-1800 Locating London´s Past has created an intuitive GIS interface that enables researchers to map and visualize textual and artefactual data relating to seventeenth and eighteenth-century London against a fully rasterised version of John Rocque´s 1746 map of London and the first accurate modern OS map (1869-80). More than this, it makes these data and maps available within a Google Maps container, allowing for the analysis of the data with open source visualization tools. The interface is readily expandable to include additional data sets and maps (both modern and historic). Building on the partnerships created through the JISC funded Connected Histories project, and through a new collaboration with the Museum of London Archaeological Service (MOLA), Locating London´s Past has produced a working GIS-enabled public web environment that allows existing electronic historical data about London to be repackaged and organised around space.

Visualising Urban Geographies Visualising Urban Geographies is a project that provides mapping tools for historians. It enables them to use digitized and geo-referenced maps in conjunction with historical information based on either addresses or districts. This spatial dimension enriches historical understanding and analysis, and can also be applied to other subject areas. The focus on Edinburgh is deliberate: to explore the potential of the mapping tools where there is available data and a wide range of suitable maps. The project operates on several levels. Inspection: Bringing together geo-referenced maps in a single place enables change over time to be identified by overlaying maps of different periods. Great Britain Historical Geographical Information System (GBHGIS) The Great Britain Historical Geographical Information System is a unique digital collection of information about Britain's localities as they have changed over time. Information comes from census reports, historical gazetteers, travellers' tales and historic maps assembled into a whole that is much more than the sum of its parts. This site tells you more about the project itself and about historical GIS. A separate website, created by funding from the UK National Lottery and extended and re-launched with funding from the Joint Information Systems Committee, makes this resource available on-line to everyone, presenting our information graphically and cartographically. That site is called A Vision of Britain through Time and presents the history of Great Britain through places.

Historical GIS Research Network This list is not exhaustive but we aim to include all of the major historical GIS websites plus additional relevant websites. Other portals are also available such as those from: the GeoHumanities Special Interest Group of the Alliance of Digital Humanities Organizations, the Humanities GIS Zotero Library, and the University of Saskatchewan's HGIS Lab. Resources are classed under: National Historical GISs Other online Historical GIS projects Historical map servers and other data sources Organisations Software Other useful sites National Historical GISs: British Culture, Traditions and Customs This page has moved to ProjectBritain.com our new British life and Culture website Britain is full of culture and traditions which have been around for hundreds of years.

Gazetteer of Sixteenth Century Florence FLORENTINE RENAISSANCE RESOURCES: Online Gazetteer of Sixteenth Century Florence home information object index index of streets, etc grid map full map Grid Map of Numbered Squares hide grid Geography of the UK The official title of the UK is the United Kingdom of Great Britain and Northern Ireland . Great Britain (the formerly separate realms of England and Scotland, and the principality of Wales. ) Northern Ireland (also known as Ulster) Numerous smaller islands including the Isle of Wight, Anglesey, and the Scilly, Orkney, Shetland, and Hebridean archipelagos. The UK is an island nation in Western Europe just off the coast of France.