The Historical Evolution of Europe's Borders 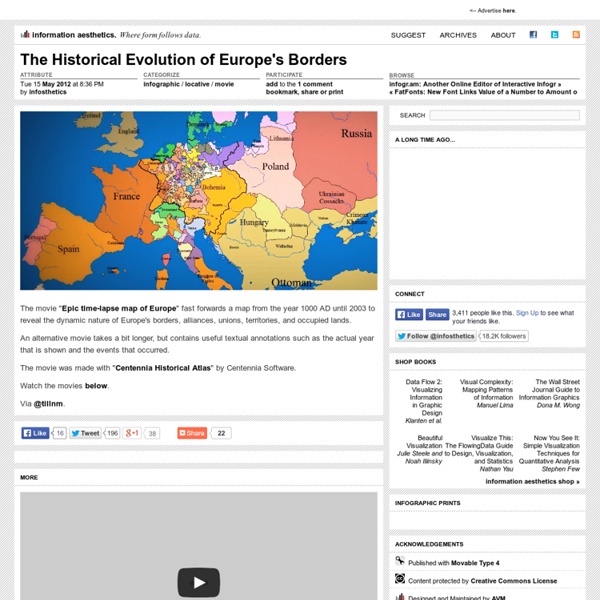 Related:  Europe, and Its History

How Common Is Your Birthday? | The Daily Viz UPDATE: I’ve written a clarification about this post here. Please read it. A friend posted an interesting data table on my Facebook wall yesterday, which was my birthday. The data listed each day of the year with a ranking for how many babies were born in the United States on each date from 1973 to 1999. Some interesting trends are evident in the data. Sept. 16 was most common. Data source: NYTimes.com, Amitabh Chandra, Harvard University

CERN For the company with the ticker symbol CERN, see Cerner. For the rocket nozzle, see SERN. Coordinates: The European Organization for Nuclear Research (French: Organisation européenne pour la recherche nucléaire), known as CERN (/ˈsɜrn/; French pronunciation: ​[sɛʁn]; derived from "Conseil Européen pour la Recherche Nucléaire"; see History) is a European research organization that operates the largest particle physics laboratory in the world. Established in 1954, the organization is based in the northwest suburbs of Geneva on the Franco–Swiss border, ( WikiMiniAtlas 46°14′3″N 6°3′19″E﻿ / ﻿46.23417°N 6.05528°E﻿ / 46.23417; 6.05528) and has 21 European member states. The term CERN is also used to refer to the laboratory, which in 2013 counted 2,513 staff members, and hosted some 12,313 fellows, associates, apprentices as well as visiting scientists and engineers[4] representing 608 universities and research facilities and 113 nationalities. CERN is also the birthplace of the World Wide Web.

Welcome...to the Renaissance As of July 1, 2013 ThinkQuest has been discontinued. We would like to thank everyone for being a part of the ThinkQuest global community: Students - For your limitless creativity and innovation, which inspires us all. Teachers - For your passion in guiding students on their quest. Partners - For your unwavering support and evangelism. Parents - For supporting the use of technology not only as an instrument of learning, but as a means of creating knowledge. We encourage everyone to continue to “Think, Create and Collaborate,” unleashing the power of technology to teach, share, and inspire. Best wishes, The Oracle Education Foundation

project on Google Earth | 360 Degree Aerial Panorama | 3D Virtual Tours Around the World We are very happy to announce that AirPano has been presented on Google Earth Travel & Tourism gallery. You can go to our page and download KML file. Google Earth maps the Earth by the superimposition of images obtained from satellite imagery, aerial photography and GIS 3D globe. Google Earth is currently available for use on personal computers running Windows 2000 and above, Mac OS X 10.3.9 and above, Linux kernel 2.6 or later, and FreeBSD. Open our KML file in Google Earth application and look for the red helicopter icons or select our panoramas from the left side menu: Datavisualization.ch Selected Tools

Black Death Spread of the Black Death in Europe (1346–53) The Black Death is thought to have originated in the arid plains of central Asia, where it then travelled along the Silk Road, reaching the Crimea by 1343.[6] From there, it was most likely carried by Oriental rat fleas living on the black rats that were regular passengers on merchant ships. Spreading throughout the Mediterranean and Europe, the Black Death is estimated to have killed 30–60% of Europe's total population.[7] In total, the plague reduced the world population from an estimated 450 million down to 350–375 million in the 14th century. The aftermath of the plague created a series of religious, social, and economic upheavals, which had profound effects on the course of European history. It took 150 years for Europe's population to recover. Chronology Origins of the disease Plague was reportedly first introduced to Europe at the trading city of Caffa in the Crimea in 1347. European outbreak Middle Eastern outbreak Symptoms Naming Causes

Ancient Civilizations - Dynamic 2 Moms To be ignorant of the past is to remain a child. (paraphrase from an observation by Cicero ) History is one of our very favorite subjects. I'm sure you can tell by what we upload, that we enjoy it. To help you get the best use of this page as it grows, we want to explain how it is developed. Obviously the continents of Europe, Africa and Asia will hold a majority of the events taking place at this time. Creation Look here on our Bible Page for a layered book for the Days of Creation depending on where you want to start with your study of history. Study of History What is History & What is Archaeology Two Tab book Mesopotamia Cover/Divider Hammurabi of Babylon flip book Sargon of Akkadia flip book (Modern Day Pakistan) Download the Indus Valley Cover here. Dnload Mohenjo-daro trifold with cover C h i n a Ancient China Cover History of Silk Leaf Book Confucius mini book For the leaf book---fill out book and attach cover (shown here) with brad at stem so that the leaf slides up and down to open. Links.

ChronoZoom ChronoZoom is an educational tool for teachers and students who want to put historical events in perspective. A great many resources have been created already in ChronoZoom for your enjoyment and enlightenment. Start Exploring Use ChronoZoom to get a perspective of the extensive scale of time and historical events relative to what happened around the world. New Teacher Resources RT @MSFTResearch: See how #Chronozoom helps students “think historically” & travel though time with 3 newly created curriculum modules http… #chronozoom is a valuable tool for illustrating Climate Change: @metanexus Anyone can author their small or Big History on the 14 Billion year timeline at - an open source project. @BillGates Congratulations to the Big History Project. RT @BillGates: Big History is my favorite course ever. You don't have any favorite timelines yet.

An Interactive Look at Connected Devices in 2020 [INFOGRAPHIC] Whether it’s the Internet of Things and the rising connectivity among devices, or the use of wireless connections for machine-to-machine applications, you might be considering how this technology affects you and your organization. It’s important to know the sharing of valuable data by devices is expected to become an almost $1 trillion industry by 2020 , according to a report by the Carbon War Room. And in the next seven years, we’ll be measuring the growth in connected devices in more than just dollars. The following is a glimpse of what this technology might mean for your business in the future: That’s a lot of devices. And a lot of potential. For organizations employing M2M technology, the benefits may be seen across wide swaths of the business , such as: Machine operators responsible for the uptime of mission-critical assets Finance professionals responsible for calculating the ROI of purchases Procurement team members evaluating the agility of their suppliers Richard G.

Related:
Related:  Europe, and Its History