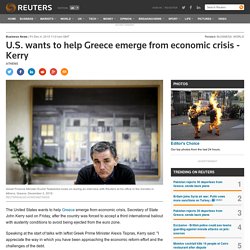 Ruins of Ancient Greek City Found on Mount Pindos. Paris bomber had Syria refugee passport, official says. Now more than ever, since the Syrian war began 4½ years ago, the crisis can be summed up as damned if you do, damned if you don't. 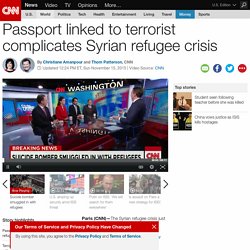 What made it worse? Sunday's revelation that at least one of the Paris terrorists who killed more than 120 people on Friday entered Europe as just another face in the crowd -- embedded in the current wave of Syrian war refugees. The development appears likely to fire up the security debate over what to do with them. More than 4 million refugees have come to Europe since Syrian government forces and rebels started fighting, opening up safe havens for ISIS and pro-ISIS forces. The immigrant wave into Europe has been reaching new highs and it shows no sign of tapering off. Why Syrian refugee passport found at Paris attack scene must be treated with caution. Two Paris suicide bombers came through Greece – prosecutor.

Greece faces potential refugee pile-up. (Photo courtesy AMG International via Facebook) Greece (MNN) — As the world reacts to the attacks in Paris, many European countries are considering closing their borders to refugees, which would potentially make the crisis even worse. 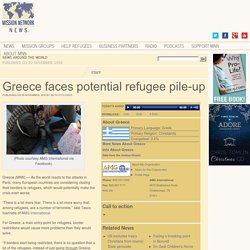 “There is a lot more fear. There is a lot more worry that, among refugees, are a number of terrorists,” said Tasos Ioannidis of AMG International. For Greece, a main entry-point for refugees, border restrictions would cause more problems than they would solve. “If borders start being restricted, there is no question that a lot of the refugees, instead of just going through Greece, they’re going to be staying in Greece for extended periods of time,” said Ioannidis.

The reality is, these refugees are fleeing the same atrocities which took place in Paris, but on a much larger scale. Is there anything that can stop refugees from fleeing the Middle East? Authorities confirm one of the Paris attackers came through Greece. Play Video1:28. 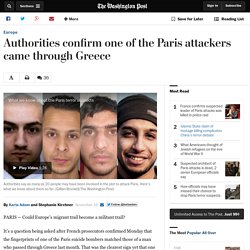 Culture in Greece and society today. Greece is a country of great interests and diverse cultures, influenced by its location, at the junction between the East and the West and by the many occupations of the Greek people throughout history. 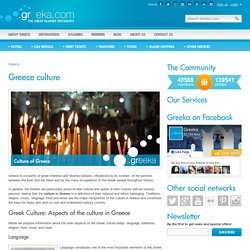 In general, the Greeks are particularly proud of their culture and speak of their country with an intense passion, feeling that the culture in Greece is a definition of their national and ethnic belonging. Traditions, religion, music, language, food and wines are the major composites of the culture in Greece and constitute the base for those who wish to visit and understand today's country. Greek Culture: Aspects of the culture in Greece Below we propose information about the main aspects of the Greek culture today: language, traditions, religion, food, music and more. Language. Greece. Greece (Greek: Ελλάδα, Elláda, pronounced [eˈlaða] ( )), officially the Hellenic Republic (Ελληνική Δημοκρατία [eliniˈci ðimokraˈti.a] Ellīnikī́ Dīmokratía)[11] and known since ancient times as Hellas (Greek: Ἑλλάς), is a country in Southern Europe.[12] According to the 2011 census, Greece's population is around 11 million. 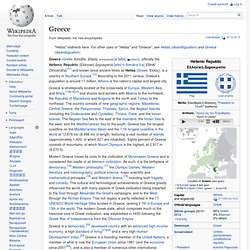 Athens is the nation's capital and largest city. Modern Greece traces its roots to the civilization of Mycenaean Greece and is considered the cradle of all Western civilization. As such, it is the birthplace of democracy,[16] Western philosophy,[17] the Olympic Games, Western literature and historiography, political science, major scientific and mathematical principles,[18] and Western drama,[19] including both tragedy and comedy. Greece with the kids: A lesson in history and heritage. "Boro na eho nero? 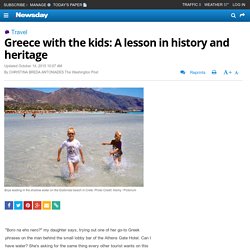 " my daughter says, trying out one of her go-to Greek phrases on the man behind the small lobby bar of the Athens Gate Hotel. Can I have water? She's asking for the same thing every other tourist wants on this 96-degree July afternoon, but she gets a little language lesson on the side. "Ena boukali," he says slowly and deliberately as he hands it over.

"Bottle. " This is serious business to my three kids, ages 9, 11 and 13. It's the trip that almost wasn't. See alsoEurope's best bets in 2015 We arrive in Athens in the midst of a minor heat wave, carrying enough cash to cover food, cabs and other expenses for two weeks. On day four we're off to Crete, catching an early morning flight to the island's biggest city, Iraklion (also spelled Heraklion), where we pick up our rental car. We start with Knossos, an elaborate Minoan palace whose history dates to about 2000 B.C. Our first outing is a traffic-clogged trip to Chania's Venetian harbor. INFO visit-greece.gr. Greece to grant legal recognition to same-sex couples. Greece’s new government has announced it will grant legal recognition to same-sex couples. 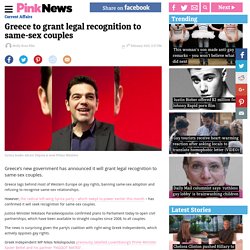 Greece lags behind most of Western Europe on gay rights, banning same-sex adoption and refusing to recognise same-sex relationships. However, the radical left-wing Syriza party – which swept to power earlier this month – has confirmed it will seek recognition for same-sex couples. Justice Minister Nikolaos Paraskevopoulos confirmed plans to Parliament today to open civil partnerships, which have been available to straight couples since 2008, to all couples. The news is surprising given the party’s coalition with right-wing Greek Independents, which actively opposes gay rights. Greek Independent MP Nikos Nikolopoulos previously labelled Luxembourg’s Prime Minister Xavier Bettel and his partner “FAGGOT MATES”.

Greek Literature. Greek theaters were built into the sides of hills. 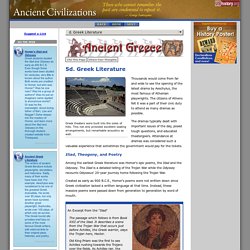 This not only provided excellent seating arrangements, but remarkable acoustics as well. Thousands would come from far and wide to see the opening of the latest drama by Aeschylus, the most famous of Athenian playwrights. The citizens of Athens felt it was a part of their civic duty to attend as many dramas as possible. The dramas typically dealt with important issues of the day, posed tough questions, and educated theatergoers. Attendance at dramas was considered such a valuable experience that sometimes the government would pay for the tickets. Influential & Major Events in the History of Ancient Greece.

Written by: Percila Jackson • edited by: Noreen Gunnell • updated: 3/10/2014 The events of Ancient Greece were varied and important to the history of the world. 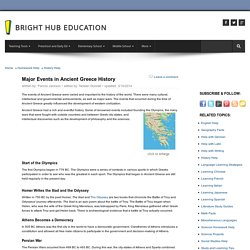 There were many cultural, intellectual and governmental achievements, as well as major wars.