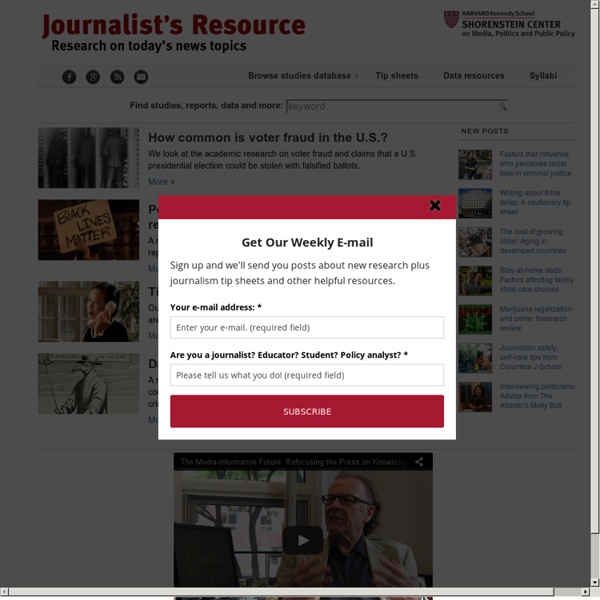 Academia, meet the press We live in a world of too much information and not enough knowledge. No one feels the strain of that digital-age truism more than journalists, who are asked to ferret out and process information with ever-increasing speed — and often at the expense of providing solid context for the news of the day. Journalist’s Resource, a new online tool developed at Harvard’s Joan Shorenstein Center on the Press, Politics and Public Policy, aims to put that background knowledge at the fingertips of reporters, bloggers, or even concerned citizens by making the work of academics less opaque and easier to find.

Animated Information Graphics: Using Data and Motion to Reveal the Story In this class you'll learn how to create information graphics that use data and reveal stories through animation. You'll learn how to go from data/reporting to an engaging and animated information graphic. What You'll Learn An overview of the approach to starting with a set of data and assetsFiguring out the story and whats important or interesting about the dataCreating hierarchy of interesting elements and an organizational schemeWriting a scriptCreating the final storyboard We'll also cover things like best practices and some tips to keep in mind as you work on your project.

Understanding the Salem Witch Trials Activity 1. Life in Puritan New England Separate the class into four groups, and assign each group one section of the EDSITEment LaunchPad under the label Understanding Puritan New England. Offer them the following instructions, and suggest that they distribute the reading evenly and return to discuss the questions after 10–15 minutes of reading. Instructors might also consider assigning this reading the night before as homework.

Study suggests breast cancer is clutch of 10 diseases Scientists who conducted a major international study into the genetics of breast cancer say they can now classify the disease into 10 subtypes - a finding that points to more accurate, tailored treatment for individual patients in future. In research published in the journal Nature on Wednesday, a team led by scientists at the Cancer Research UK (CRUK) charity also found several completely new genes that drive breast cancer, offering potential targets for new types of drugs. Carlos Caldas, who co-led the study at CRUK's Cambridge Research Institute and the University of Cambridge said the findings mean breast cancer should now be seen as an "umbrella term" for a larger number of diseases. "Essentially we've moved from knowing what a breast tumor looks like under a microscope to pinpointing its molecular anatomy," he said.

Peer Pressure 462 pp. New York: The Free Press. $26. As I was writing this review, two friends called to ask me about ''that book that says parents don't matter.'' Well, that's not what it says. Guest Post: Trends in mobile advertising for 2013 GoMo News by Aaron Peters, a blogger who works with Superscholar As so many people now have smartphones, it’s becoming more and more popular to use them as a medium for advertising. With 2013 now on us, I decided to do some research as to what pundits are saying which are the most likely mobile advertising trends we can expect to see in 2013. Better targeting Visual Literacy in an Age of Data Statistician Hans Rosling inserts himself into charts during a TED talk and creates a narrative around the data. Shazna Nessa explains visual literacy and why it’s critical for data visualizers to take it seriously. It’s not what you look at that matters, it’s what you see. —Henry David Thoreau Data visualization work in journalism has been flourishing over the past few years both to find and analyze data for investigative purposes and to present information to the public.