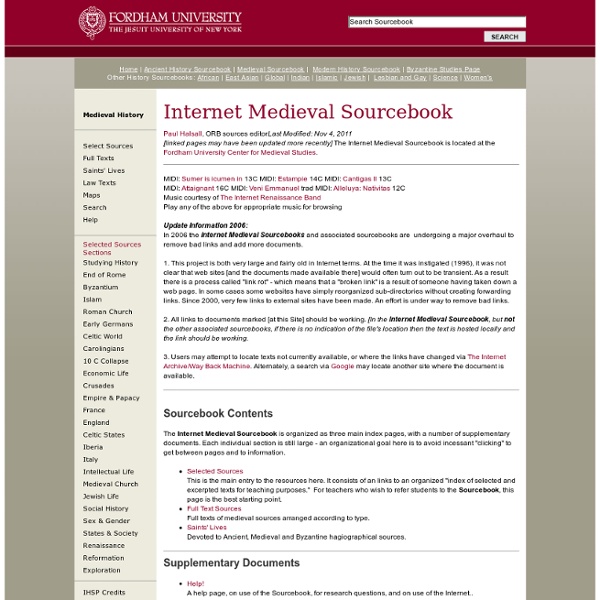 Update Information 2006: In 2006 the Internet Medieval Sourcebooks and associated sourcebooks are undergoing a major overhaul to remove bad links and add more documents. 1. This project is both very large and fairly old in Internet terms. At the time it was instigated (1996), it was not clear that web sites [and the documents made available there] would often turn out to be transient. As a result there is a process called "link rot" - which means that a "broken link" is a result of someone having taken down a web page. In some cases some websites have simply reorganized sub-directories without creating forwarding links. 2. 3. The Internet Medieval Sourcebook is organized as three main index pages, with a number of supplementary documents. INTRODUCTION: MEDIEVAL SOURCES ON THE INTERNET Historians teaching medieval history surveys almost always want to combine a textbook, a sourcebook, and additional readings. DOCUMENT SIZE: The size of documents for teaching purposes is an issue.

Internet Library of Early Journals We regret to inform users that this resource is no longer available. The site has been withdrawn as the technologies which it is built with have reached end-of-life. An archived version of the site is available at Last update to original site: 1999 Date withdrawn: 1 April 2020

Home Click here to jump straight to the articles: Original Preface. The Catholic Encyclopedia, as its name implies, proposes to give its readers full and authoritative information on the entire cycle of Catholic interests, action and doctrine. What the Church teaches and has taught; what she has done and is still doing for the highest welfare of mankind; her methods, past and present; her struggles, her triumphs, and the achievements of her members, not only for her own immediate benefit, but for the broadening and deepening of all true science, literature and art — all come within the scope of the Catholic Encyclopedia. It differs from the general encyclopedia in omitting facts and information which have no relation to the Church. On the other hand, it is not exclusively a church encyclopedia, nor is it limited to the ecclesiastical sciences and the doings of churchmen.

New Medieval Books: 10 Open Access Books in Medieval Studies Authors and publishers are increasingly making new books available in Open Access. This include the field of medieval studies and here are 10 books published in 2019 and 2020 which you can freely download and read right now. Making the Medieval Relevant: How Medieval Studies Contribute to Improving our Understanding of the Present Edited by Chris Jones, Conor Kostick and Klaus Oschema British Library’s Catalog of Illuminated Manuscripts Generous Permissions The British Library began the digital catalog in 1997. Currently the catalog provides a digital record of 4,231 different manuscript, and includes 35,661 images those manuscripts, with a searchable database. The images were scanned following the best digital practices, and include provenance, metadata, and in many cases, detailed images.

Medieval and Renaissance Fact and Fiction undefined This page is meant to be a guide to resources available on the Web for people who are interested in the history, culture, literature and re-creation of the Middle Ages and Renaissance. There are hundreds of sites on the Middle Ages on the Web. The World Wide Web project The WorldWideWeb (W3) is a wide-area hypermedia information retrieval initiative aiming to give universal access to a large universe of documents. Everything there is online about W3 is linked directly or indirectly to this document, including an executive summary of the project, Mailing lists , Policy , November's W3 news , Frequently Asked Questions . What's out there? Pointers to the world's online information, subjects , W3 servers, etc. Help on the browser you are using

Welcome to the Online Library of Liberty Advanced Search Today the OLL has… 1,692 titles, 466 authors, and 1,185 essays in 24 categories News and Announcements [Archive]: Quotations about Liberty and Power The State of California issued its own Bill of Rights in 1849 with a strong defence of property rights (1849) The Britannia Lexicon Have you always wanted to travel back in time to the Middle Ages but were hesitant because you didn't speak the language? Presenting the Britannia Lexicon of strange legal, feudal, chivalric, monastic, military and architectural terms to help you understand what those guys back then were really trying to say. In addition, we will soon be including lengthier entries on particular events, wars, movements and organizations, called "Sidebars of History" which will give a more in-depth view of life, politics and religion in medieval Britain. Just click a letter below to begin.

JCS Online Resources The acclaimed Churchill Archive is now free for the first time to schools worldwide thanks to a $1 million donation from philanthropist Laurence Geller CBE. "All children should understand Sir Winston Churchill’s fundamental place in our nation’s history,” says the Rt Hon Nicky Morgan MP, Secretary of State for Education and Minister for Women and Equalities, "and schools can now seize the opportunity to access the Churchill Archive – a tremendous cache of documents that bring history to life.” Opening up exciting new opportunities for the teaching and learning of History at secondary level, the Churchill Archive - described by History Today as "the real gem of online Churchill resources" - offers cross-searchable online access to over 800,000 original documents.