Juan dela Cruz Palaris. Juan de la Cruz, also known as Palaris, (8 January 1733 – 26 February 1765) was a Pangasinan leader in the province of Pangasinan in the Philippines who led a revolt against the colonial authoritires during the 18th century. 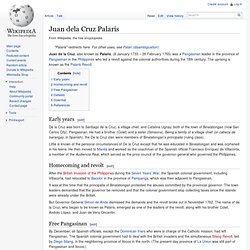 The uprising is known as the Palaris Revolt. Early years[edit] De la Cruz was born to Santiago de la Cruz, a village chief, and Catalina Ugnay, both of the town of Binalatongan (now San Carlos City), Pangasinan. He had a brother (Colet) and a sister (Simeona). Being a family of a village chief (or cabeza de barangay, in Spanish), the De la Cruz clan were members of Binalatongan's principalia (ruling class). Manuel L. Quezon. Fidel V. Ramos. Lapu-Lapu. Miguel López de Legazpi. Birthplace of Legazpi in Zumarraga, Gipuzkoa Miguel López de Legazpi[1] (c. 1502 – August 20, 1572), also known as El Adelantado and El Viejo (The Elder), was a Basque Spanish navigator and governor who established the first Spanish settlement in the East Indies when his expedition crossed the Pacific Ocean from the Viceroyalty of New Spain in modern-day Mexico, and founded Cebu on the Philippine Islands in 1565. 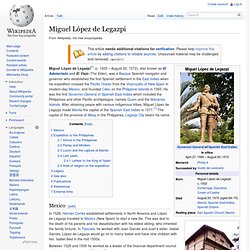 He was the first Governor-General of Spanish East Indies which included the Philippines and other Pacific archipelagos, namely Guam and the Marianas Islands. After obtaining peace with various indigenous tribes, Miguel López de Legazpi made Manila the capital of the Spanish East Indies in 1571.[1] The capital of the province of Albay in the Philippines, Legazpi City bears his name. Mexico[edit] In 1528, Hernán Cortés established settlements in North America and López de Legazpi traveled to Mexico (New Spain) to start a new life. Andrés Bonifacio. Andrés Bonifacio y de Castro (30 November 1863 – 10 May 1897) was a Filipino nationalist and revolutionary. 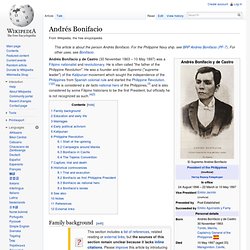 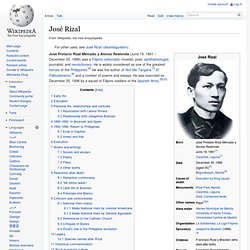 He learned the alphabet from his mother at 3, and could read and write at age 5.[13] Upon enrolling at the Ateneo Municipal de Manila, José dropped the last three names that make up his full name, on the advice of his brother, Paciano Rizal, and the Mercado-Rizal family, thus rendering his name as "José Protasio Rizal".

Of this, Rizal writes: "My family never paid much attention [to our second surname Rizal], but now I had to use it, thus giving me the appearance of an illegitimate child! "[14] This was to enable him to travel freely and disassociate him from his brother, who had gained notoriety with his earlier links to Gomburza. Emilio Aguinaldo. Emilio Famy Aguinaldo QSC PLH[d] (22 March 1869[c] – 6 February 1964) is officially considered the First President of the Philippines (1899-1901) and led Philippine forces first against Spain in the latter part of the Philippine Revolution (1896-1897), and then in the Spanish-American War (1898), and finally against the United States during the Philippine-American War (1899-1901). 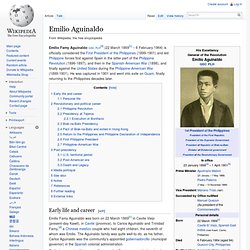 He was captured in 1901 and went into exile on Guam, finally returning to the Philippines decades later. Early life and career[edit] Emilio Famy Aguinaldo was born on 22 March 1869[c] in Cavite Viejo (present-day Kawit), in Cavite (province), to Carlos Aguinaldo and Trinidad Famy,[d] a Chinese mestizo couple who had eight children, the seventh of whom was Emilio. Mariano Gómez. Karim ul-Makhdum - WikiPilipinas: The Hip 'n Free Philippine Encyclopedia. Rajah Humabon. José Burgos. José Apolonio Burgos y García was a Filipino mestizo secular priest, accused of mutiny by the Spanish colonial authorities in the Philippines in the 19th century. 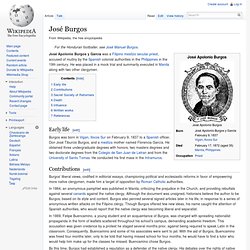 He was placed in a mock trial and summarily executed in Manila along with two other clergymen. Early life[edit] Burgos was born in Vigan, Ilocos Sur on February 9, 1837 to a Spanish officer, Don José Tiburcio Burgos, and a mestiza mother named Florencia García. Benigno Aquino, Jr. Benigno Simeon "Ninoy" Aquino, Jr.[2][3][4][5] (November 27, 1932 – August 21, 1983) was a Filipino Senator (1967-1972) and a former Governor of Tarlac. 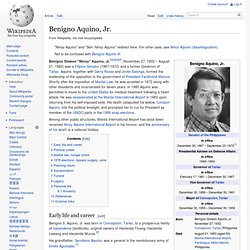 Aquino, together with Gerry Roxas and Jovito Salonga, formed the leadership of the opposition to the government of President Ferdinand Marcos. Shortly after the imposition of Martial Law, he was arrested in 1972 along with other dissidents and incarcerated for seven years. In 1980 Aquino was permitted to travel to the United States for medical treatment following a heart attack.

Corazon Aquino. A self-proclaimed "plain housewife",[1] she was married to Senator Benigno Aquino, Jr., the staunchest critic of President Marcos. 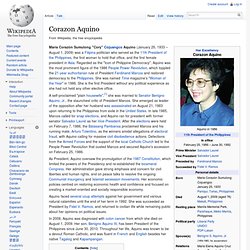 She emerged as leader of the opposition after her husband was assassinated on August 21, 1983 upon returning to the Philippines from exile in the United States. In late 1985, Marcos called for snap elections, and Aquino ran for president with former senator Salvador Laurel as her Vice-President. After the elections were held on February 7, 1986, the Batasang Pambansa proclaimed Marcos and his running mate, Arturo Tolentino, as the winners amidst allegations of electoral fraud, with Aquino calling for massive civil disobedience actions. Defections from the Armed Forces and the support of the local Catholic Church led to the People Power Revolution that ousted Marcos and secured Aquino's accession on February 25, 1986. Aquino faced several coup attempts against her government and various natural calamities until the end of her term in 1992.

Jacinto Zamora. Jacinto Zamora y del Rosario (14 August 1835 - 17 February 1872) was a Filipino secular priest, part of the Gomburza trio who were falsely accused of mutiny by the Spanish colonial authorities in the Philippines in the 19th century. 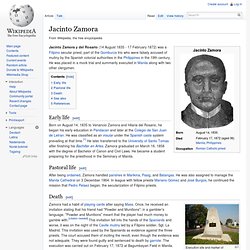 He was placed in a mock trial and summarily executed in Manila along with two other clergymen. Early life[edit] Born on August 14, 1835 to Venancio Zamora and Hilaria del Rosario, he began his early education in Pandacan and later at the Colegio de San Juan de Letran. He was classified as an insular under the Spanish caste system prevailing at that time.[1] He later transferred to the University of Santo Tomas after finishing his Bachiller en Artes.